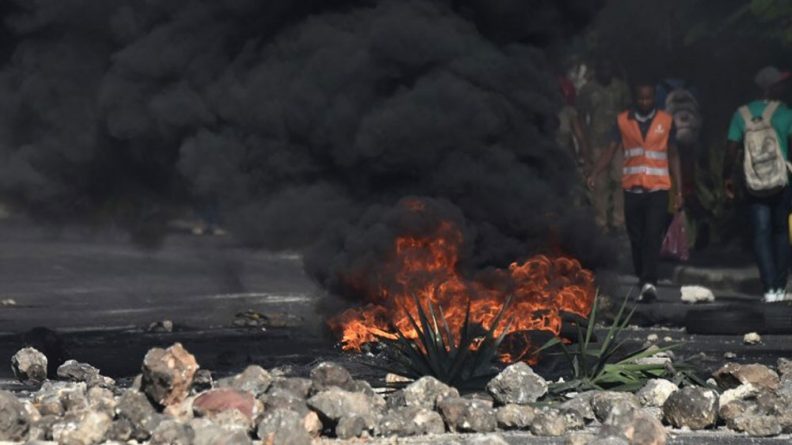 Haiti’s government has suspended a proposal that would have nearly doubled fuel prices after violent protests killed at least two people and left the capital Port-au-Prince at a standstill.

President Jovenel Moise called on protesters to “go home” late on Saturday after the announcement, but Reuters news agency, citing local media, reported that the government’s decision to back down did not keep residents from taking to the streets.

Prime Minister Jack Guy Lafontant announced the temporary suspension of an increase in prices of up to 50 percent for gasoline, diesel and kerosene on Saturday afternoon – just a day after they were announced.

“As soon as you speak, I listen,” Moise said in an address broadcast on state television. “Because you started sending me this message last night, I received it and corrected what had to be corrected.”

“To those watching me tonight, I ask you all: Go home,” he said, adding authorities had been directed to clean up the streets.

On Friday, Haiti’s commerce and economy ministries announced that fuel price increases – including a 38 percent jump for gasoline, 47 percent for diesel and 51 percent for kerosene – would take effect at midnight, triggering violent protests.

The capital Port-au-Prince and its surrounding areas have stood paralysed since Friday afternoon, with major routes blocked by barricades, some made of burning tires, and some protesters calling for a revolution in the impoverished country.

Similar protests broke out in Cap-Haitien, the second-largest city, as well as in the communes of Les Cayes, Jacmel and Petit-Goave.

The US embassy in Haiti advised personnel and Americans in the country to shelter in place.

Just before the suspension was announced, the leader of Haiti’s lower house of parliament had threatened a government takeover if the fuel price increases were not reversed.

“The poor people want to be able to eat,” one masked protester told Reuters as a car blazed behind him. “I want to tell [President] Jovenel [Moise] that Haiti is not for him and his family. Haiti is for every Haitian. He needs to leave the country and leave the country to us so we can live.”

Haiti is still recovering from Hurricane Matthew, which struck in 2016.

Almost 40,000 people remain in makeshift camps after an earthquake killed more than 200,000 people eight years ago, and thousands of others have died from a years-long cholera epidemic.