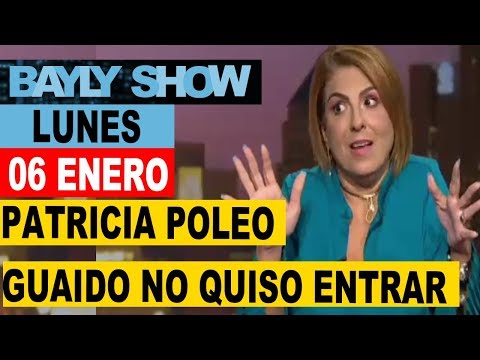 The Venezuelan journalist, linked to the opposition and based in Miami, Florida (USA), Patricia Poleo, confirmed on Jaime Bayly’s program that deputy Juan Guaidó was not prevented from entering the National Assembly (AN) on Sunday, January 5 for the Extraordinary Session in which the election of the new Board of Directors of the Congress was held.

The Minister for Communication and Information of Venezuela, Jorge Rodríguez, shared excerpts from the interview with the journalist.

“Everyone knows about @PattyPoleo’s commitment to the Venezuelan right. In her role as a journalist she answered Bayly’s questions. For the sake of truth, I’ll allow myself to publish some of her statements. I’ll open a thread,” wrote the Venezuelan politician.

“If it is true that Guaidó refused to enter, there are videos, in fact I presented it on my program today” – said Poleo – “There is a video where he arrives at the door where all the deputies enter and he enters accompanied by a deputy who had his immunity lifted by the regime and the national guard sees the list … a list of those who could not enter, among those were those who had the immunity lifted… and he tells Guaidó that he can enter, asks him to pass, but that the other deputy cannot enter and Guaidó said “If he cannot enter, I won’t enter either” and he left.

It should be noted that after these events, at the time when the new Board of Directors was being elected, in which Luis Parra (Justice First) was elected as the new President of the AN, Deputy Juan Guaidó tried to jump a side gate ‘to enter’ and the security forces took him down from the iron fence.

“Where is the money?”
Another issue that Poleo pointed out has to do with the resources that the United States has allocated to Juan Guaidó during the course of 2019.

“Elliott Abrams today made statements saying that the Assembly has been given money for its operation. The US has given it. Where is that money? Some deputies received it, other deputies were resentful because, look, (to illustrate, she points to Bayly) you are giving Jaime 500 dollars a week. Why am I receiving 100? And that resentment grew during the last months.”

“(The G4) has to give us an explanation”
Patricia Poleo considered that the leaders of the opposition political parties should give an explanation of what happened in the AN on January 5.

“Do you know what I think? That the political parties, the heads of the political parties have to give us an explanation about that (election of Luis Parra). You know why? Because they are not just any militants, he was not a ‘rando’ as they say out there … Luis Parra is a trusted activist for Julio Borges, who is the one who runs the party, in fact, Borges appointed him in Yaracuy state as Chief.”

The last statement from Poleo worth mentioning happened when Bayly referred to the coming Parliamentary elections in Venezuela and Poleo, razor sharp, said: “We are going to lose” that election.