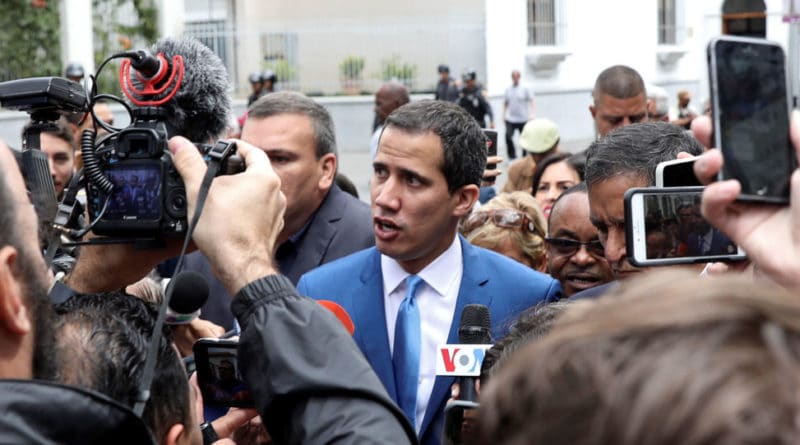 It is no longer about ideological disputes. It is something more elementary, essential: a media outlet should not lie. The lie is in the middle as in a bank scam. If this one should not steal the money from its customers, a news outlet should not skimp on the information needed by its audience, which relies on the honesty and equanimity of its information source.

Unfortunately, what we have seen in the hegemonic press regarding the election of the new president of the National Assembly of the Bolivarian Republic of Venezuela in MSM such as Clarín , Infobae and La Nación in Argentina, or El País in Spain, El Mercurio in Chile or CNN in the United States, constitutes a monumental scam against the good faith of its readers. The Spanish newspaper, for example, says that “The self-proclamation of Luis Parra and the election of Guaidó in an alternative session complicate the parliamentary landscape.” Similar headlines flood the other media already mentioned. The problem is that there was no such self-proclamation of Luis Parra. That is what the friends of the various members of the gang of political operators do, not journalists, who play with our time and who protect self-proclaimed and corrupt ones like Juan Guaidó and Jeannine Añez. Parra, however, of the ultra-opposition Justice First party,  did not proclaim himself but obtained 81 votes from the 140 deputies present (out of a total of 167) who came to the AN precinct and that is why he was proclaimed as president of said legislative body. The one who turned to “self-proclaimation” and in the offices of the newspaper El Nacional was Guaidó!  Which speaks clearly to the real function of certain media that claim to do “independent journalism.” Despite the existence of a quorum and the presence of deputies of all political forces, the hitherto President of the Assembly, Juan Guaidó, refused to enter the Legislative Palace and install the session, as was his obligation, remaining on the outskirts of the parliamentary seat and pretending to force the entry of four deputies who had been disqualified by the Supreme Court of Justice for various reasons. In video recordings he is heard saying that “if they do not enter me neither.” They  finally entered, but he remained outside. It should be stressed that none had participated in the sessions of the current legislative period and that Guaidó, as president of the body, never requested their presence.

In the absence of Guaidó, the regulations of the National Assembly provide that the most senior deputy is allowed as Director of Debates and may start the session. Thus, with the vote of 81 deputies, a new five-member leadership was elected, all belonging to opposition parties. You have to be a liar, like the media mentioned above, to talk about a “Maduro parliamentary coup” when the new leadership is entirely made up of opposition politicians. That is, Maduro would have to have been so incompetent that he organized a parliamentary coup, supposedly to favor his political plans, as a result of which the new AN Directive is in the hands of five strong opponents of his government! Something does not click in this explanation. The reason: that all this is an absolutely false account of reality. What an honorable press should have said is that the election of the new president of the AN was carried out in accordance with the legal requirements, on the day and place provided by the Constitution (not in a square or in the offices of a newspaper, as Guaidó did), that there was the quorum as the law mandates and that the vote was made in the presence of the outgoing Board of Directors, except for Guaidó, obtaining the opposition a sum of votes that exceeded half plus eleven of the 140 parliamentarians on the premises.

How to explain the behavior of the “self-proclaimed”? First, because of his irreparable discredit in the opposition ranks. Remember the complaint against him made by the “imaginary” ambassador that he himself appointed in Colombia, Humberto Calderón Berti, who accused him of stealing, along with some of his friends, part of the money that the White House had sent to finance Operation “Humanitarian Aid + Concert in Cúcuta” of February 23 and “spending it on prostitutes and liquor” apart from, surely, on some other prohibited substance. [1]

Second, because the agreement in the opposition was that there would be an alternation of the parties that presided over the AN and that upon the renewal of authorities that took place on January 5, the Guaidó party, Popular Will, should cede the place to Justice First , and like a good rascal he ignored that agreement and tried to emerge airily victimized in a pathetic attempt to enter the AN illegally when nothing and no one prevented him from doing it normally, like all opposition deputies. But he had to provide the empire, CNN and the mainstream media of the continent that photo that the entire right needed to confirm the dictatorial nature of Maduro’s “regime” and add the group of vacilators to the recalcitrant right-wing group in Latin America. A farce very well thought out and acted, pity for him that the eyewitnesses and the videos that circulate profusely in the network clearly demonstrated the deception. Third, because Trump ordered him not to go down and continue with his fantasy until he knocked out Maduro and, obedient and supine, and with some accounts pending with the White House for those little sums of February 23, Guaidó obeyed his master’s order.

An indelible torrent of manure falls on the media that instead of recounting these facts, real and proven (even with videos taken by parliamentarians and people who were in the vicinity of the headquarters of the AN and that went viral on the Internet) folded to the speech that Washington needs in preparation for an eventual military adventure in Venezuela or the intensification of its economic, financial, cyber, diplomatic attacks, etc. against that country. They lied, once again, as they have been doing for decades to promote their interests and those of the empire, they are their informal house organs. They cheated their readers and their audiences for the umpteenth time. But they don’t care much. They achieved what they intended: to continue to confuse public opinion and officials of several Latin American foreign ministries – unfortunately Argentina was no exception – they bought the fake news from the hegemonic media and admitted it as true, showing a lack of prefessionalism, issuing shameful statements where Ignorance mixed with indolence resulted in diplomatic folly that will take a lot of time and work to correct.

To this, we must add the deep-rooted belief in the Latin American diplomatic establishment that if a government aligns unconditionally with Washington – for example, closing its eyes to the terrorist attack against Qassem Suleimani in Iraq, or joining the choir that sings to Guaidó as the messiah of Venezuelan democracy – his faithfulness will be generously rewarded by the White House. Argentina has already tried that policy of “carnal relations” proposed by Carlos S. Menem during his long ten years of government and ended in a phenomenal debacle in the face of the icy indifference of the United States government. To think that now it may be different is a sample of political ingenuity, even taking into account the redoubled submission to that country in which the government of Mauricio Macri left his successor. An independent foreign policy, serious, exempt from grandiloquence and consistent with the rich multipolarity of today’s world, is the best letter of introduction for the difficult negotiations that the countries of the area, and especially Argentina, must permanently engage with the White House. Unconditional alignment to it not only does not help but also hurts. Hopefully it will note history’s lessons and act accordingly.