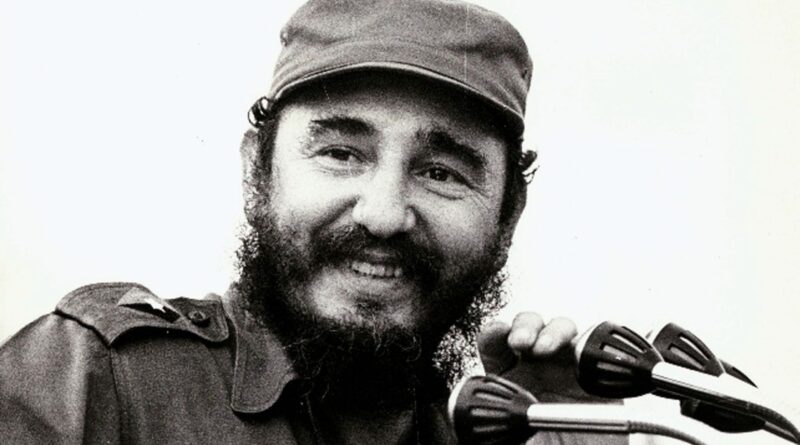 On October 16th, 1953, defending himself in a Havana courtroom, Fidel Castro uttered the glorious words “history will absolve me.” And it did.

The words “history will absolve me” were the concluding lines of his statement to the court that day, and they became the manifesto of the 26th of July Movement which, on January 1st, 1959, would free the Cuban people from the grips of Fulgencio Batista’s military dictatorship.

Although this final phrase was certainly the most impactful, the content of Castro’s entire speech was both a rousing call for justice in Cuba and an eloquent defense of the revolutionary acts for which Castro was being tried: the armed attack of the Moncada Army barracks on July 26, 1953. The basic argument, in which he refers to the 1940 Cuban Constitution numerous times, demonstrated that it was not Castro and his rebels who had broken the law at all, but on the contrary, it was the dictator Batista and his army who were acting illegally and in violation of the nation’s constitution and legal code. Castro, after all, was a lawyer, and an exceptional one with near-photographic recall, able to quote lengthy texts entirely from memory.

His arguments in the courtroom that day ring just as true today:

“the Havana Bar Association appointed Dr. Jorge Pagliery, Dean of the Bar in this city, to represent me in this case. However, he was not permitted to carry out his task. As often as he tried to see me, the prison gates were closed before him… One supposes that a lawyer has a right to speak with his defendant in private, and this right is respected throughout the world, except in the case of a Cuban prisoner of war in the hands of an implacable tyranny that abides by no code of law, be it legal or humane… The accused, who is now exercising this right to plead his own case, will under no circumstances refrain from saying what he must say…

“I realize that for a prosecuting attorney under oath of loyalty to the Constitution of the Republic, it is difficult to come here in the name of an unconstitutional, statutory, de facto government, lacking any legal much less moral basis, to ask that a young Cuban, a lawyer like himself — perhaps as honorable as he, be sent to jail for 26 years… The article in question [Article 148 of Cuba’s Constitution] reads textually: ‘A penalty of imprisonment of from three to ten years shall be imposed upon the perpetrator of any act aimed at bringing about an armed uprising against the Constitutional Powers of the State. The penalty shall be imprisonment for from five to twenty years, in the event that insurrection actually be carried into effect.’…

“Let me tell you a story: Once upon a time there was a Republic. It had its Constitution, its laws, its freedoms, a President, a Congress and Courts of Law. Everyone could assemble, associate, speak and write with complete freedom. The people were not satisfied with the government officials at that time, but they had the power to elect new officials and only a few days remained before they would do so. Public opinion was respected and heeded and all problems of common interest were freely discussed. There were political parties, radio and television debates and forums and public meetings. The whole nation pulsated with enthusiasm. This people had suffered greatly and although it was unhappy, it longed to be happy and had a right to be happy. It had been deceived many times and it looked upon the past with real horror. This country innocently believed that such a past could not return; the people were proud of their love of freedom and they carried their heads high in the conviction that liberty would be respected as a sacred right. They felt confident that no one would dare commit the crime of violating their democratic institutions. They wanted a change for the better, aspired to progress; and they saw all this at hand. All their hope was in the future.

“Poor country! One morning the citizens woke up dismayed; under the cover of night, while the people slept, the ghosts of the past had conspired and has seized the citizenry by its hands, its feet, and its neck. That grip, those claws were familiar: those jaws, those death-dealing scythes, those boots. No; it was no nightmare; it was a sad and terrible reality: a man named Fulgencio Batista had just perpetrated the appalling crime that no one had expected. Then a humble citizen of that people, a citizen who wished to believe in the laws of the Republic, in the integrity of its judges, whom he had seen vent their fury against the underprivileged, searched through a Social Defense Code to see what punishment society prescribed for the author of such a coup, and he discovered the following:

· ‘Whosoever shall perpetrate any deed destined through violent means directly to change in whole or in part the Constitution of the State or the form of the established government shall incur a sentence of six to ten years imprisonment.

· ‘A sentence of three to ten years imprisonment will be imposed on the author of an act directed to promote an armed uprising against the Constitutional Powers of the State. The sentence increases from five to twenty years if the insurrection is carried out.

· ‘Whosoever shall perpetrate an act with the specific purpose of preventing, in whole or in part, even temporarily, the Senate, the House of Representatives, the President, or the Supreme Court from exercising their constitutional functions will incur a sentence of from six to ten years imprisonment.

· ‘Whosoever shall attempt to impede or tamper with the normal course of general elections, will incur a sentence of from four to eight years imprisonment.

· ‘Whosoever shall introduce, publish, propagate or try to enforce in Cuba instructions, orders or decrees that tend … to promote the unobservance of laws in force, will incur a sentence of from two to six years imprisonment.

· ‘Whosoever shall assume command of troops, posts, fortresses, military camps, towns, warships, or military aircraft, without the authority to do so, or without express government orders, will incur a sentence of from five to ten years imprisonment.

· ‘A similar sentence will be passed upon anyone who usurps the exercise of a function held by the Constitution as properly belonging to the powers of State.’

“Without telling anyone, Code in one hand and a deposition in the other, that citizen went to the old city building, that old building which housed the Court, competent and under obligation to bring cause against and punish those responsible for this deed. He presented a writ denouncing the crimes and asking that Fulgencio Batista and his seventeen accomplices be sentenced to 108 years in prison as decreed by the Social Defense Code; considering also aggravating circumstances of secondary offense, treachery, and acting under cover of night. Days and months passed. What a disappointment! The accused remained unmolested: he strode up and down the country like a great lord and was called Honorable Sir and General: he removed and replaced judges at will. The very day the Courts opened, the criminal occupied the seat of honor in the midst of our august and venerable patriarchs of justice. Once more the days and the months rolled by, the people wearied of mockery and abuses. There is a limit to tolerance! The struggle began against this man who was disregarding the law, who had usurped power by the use of violence against the will of the people, who was guilty of aggression against the established order, had tortured, murdered, imprisoned and prosecuted those who had taken up the struggle to defend the law and to restore freedom to the people.

“Honorable Judges: I am that humble citizen who one day demanded in vain that the Courts punish the power-hungry men who had violated the law and torn our institutions to shreds. Now that it is I who am accused for attempting to overthrow this illegal regime and to restore the legitimate Constitution of the Republic!”

“…I do not fear prison, as I do not fear the fury of the miserable tyrant who took the lives of seventy of my comrades. Condemn me. It does not matter. History will absolve me.”

This speech and many others of Castro are collected in the Fidel Castro Reader anthology (Ocean Press, 2010).

The speech can be read in its entirety online at this location.