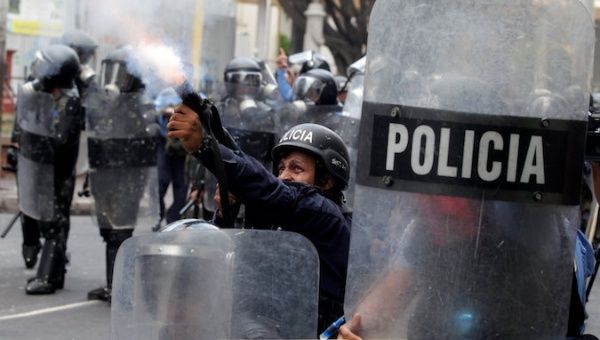 The Federation of Teaching Organizations of Honduras (FOMH) has been organizing protests in the country’s 18 departments.

The Honduran police attacked on Monday thousands of protestors in the streets of the capital against privatization of health and education services as they were being voted in Congress.

RELATED CONTENT: More Than 500 Hondurans are Detained Daily at the Mexican Border

The Honduran Medical Association (HMA) and Union of Public Education Employees (Siempe), among other organizations, have been mobilized since Friday after the National Congress, ruled by President Juan Orlando Hernandez’s National Party (NP), voted April 25 by a raise of hands to approve the president’s Restructuring and Transformation of the National Health and Education System.

The unions and other opponents of the measure, among them the Libre Party led by the left-leaning, 2009-ousted president Manuel Zelaya, say it will lead to massive layoffs and the privatization of the country’s healthcare system.

The state-run medical and pension system was already robbed of around US$350 million by Hernandez and a ring of politicians between 2013 and 2014 in order to fund the NP and the president’s 2016 campaign.

The teachers’ union says in addition to the approval of the law, the way in which is was done, by hand vote is “embarrassing” and violates legislature voting procedures. Members of the medical union agree and say the policy is null because lawmakers didn’t follow voting protocol.