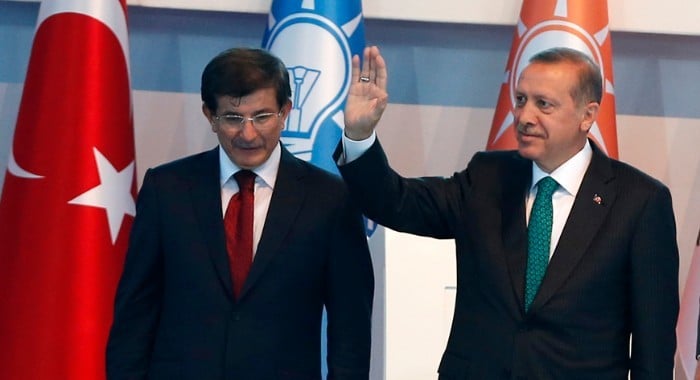 After the recent election losses, Erdogan may be running out of external enemies and could be bringing his witch hunt home to the AKP.

Following the most recent municipal elections in Turkey, the Justice and Development Party (AKP) took several big blows, but perhaps there are none worse than those that are self-inflicted. While losing important major cities including Ankara and Istanbul to the main opposition, the Republican People’s Party (CHP) it now seems the real problems for the AKP are in-house.

While Erdogan is continuing to blame everyone from the Kemalists in the CHP, the PKK, crypto-Jews, to crypto-Armenians and, of course, Gulenists for his losses; it now seems as if the President is preparing to flush out his former allies. After forcing the municipal elections on to a national stage along with a rapidly deteriorating economy caused in large part by Turkey’s geopolitical position, it now seems [at least some of] the knives are out for Erdogan.

Erdogan began looking for scapegoats almost immediately after losing Ankara and Istanbul. Although initially Erdogan tried to ignore the outcome of the election in Istanbul he was simultaneously forcing a recount as well as working to call a second vote, the former which was limited by Turkey’s elections board and the latter being denied altogether.

This really leaves Erdogan with nobody left to blame for the AKP’s losses except the party’s own mayoral candidates. The problem for Erdogan is that these candidates probably have a better case to point the finger at Erdogan.

The first mistakes by Erdogan happened before any ballots were even cast when the President decided to make municipal elections into a de-facto referendum on his leadership. In the lead up to voting Erdogan, of course, deployed the usual tactics such as accusing opposition parties of being terrorist front groups, tools of Fethullah Gulen, and waves of arrests and intimidation of opposition supporters he also decided to drag his own voters into a standoff with the US that is (in part) currently dragging the Turkish economy under.

Starting before the election and still ongoing now there has been a rapid decline in the Turkish economy. There are multiple factors behind this sharp decline but two major ones both have Erdogan’s fingerprints on them. First up, there has been almost a decade of easily obtainable loans with low-interest rates which initially spurred much of the growth of Erdogan’s earlier terms as Prime Minister and President. These poorly vetted loans have started to go sideways (with US banking giants now looking to purchase and restructure them) leaving the Turkish economy, formerly the second fastest growing behind China, in the early stages of a recession.

On top of this already shaky foundation comes the second major problem for the Turkish economy, which is the current standoff between Ankara and Washington which has led to sanctions Erdogan has called “economic terrorism.”

These sanctions and threats against Turkey have come out of the geopolitical spat started over Ankara’s plan to purchase the Russian S-400 missile defense systems rather than the US-made patriots. Washington also claims the S-400s will put the new F-35 stealth fighter (which Turkey helped build as a partner in the project) in danger due to the NATO and Russian equipment being in the same defense network. So far, Erdogan has refused to back down on this issue and continues to say Turkey will not succumb to the aforementioned terrorism.

Now it seems as if this is putting Erdogan at odds with some members of his own party and – similar to his coalition partners in the Nationalist Movement Party (MHP) in the last Parliamentary election – high-ranking members of the AKP are breaking ranks.

Most prominent among the recent critics of Erdogan is his own former successor to lead the AKP and former second-in-command as Prime Minister, Ahmet Davutoglu who has recently called the President’s leadership “arrogant.” Davutoglu’s main concern was the economic crisis which he says can’t be managed “by denying its existence” but it is also likely he is angered by Erdogan’s closer and closer ties to the most vile nationalists and neo-ottoman zealots which Davutoglu worries have caused the President to turn away from making any type of moves to fix the economy besides blaming the enemies of Turkey, real or perceived.

Unfortunately for Turkey, and possibly the world, Davutoglu holds no actual power in government or the AKP, and while his message has failed to be taken up by any high-level AKP members. While he may not have any support, Erdogan hasn’t failed to notice and whether any members of the AKP actually agree with the former PM probably won’t matter.

Erdogan is looking for scapegoats to blame for his party’s loss in the municipal elections. Signs are already pointing to this such as Erdogan’s recent promise to flush out internal enemies within the AKP.

All of this likely means that even the stooges who already consistently bend to Erdogan’s will within the AKP and their coalition partners in the MHP are now at risk. Erdogan has been cracking down on any viable outside opposition since taking power as Prime Minister (and in overdrive since the failed 2016 coup) but after several too-close-for-comfort election victories and now the loss of the major cities, it’s clear the witch hunt among the outside opposition won’t be enough to keep the AKP in power forever. The outside purges are likely to continue, but those inside aren’t out of the woods. Erdogan is looking for enemies and if he can’t find them, he will make them.