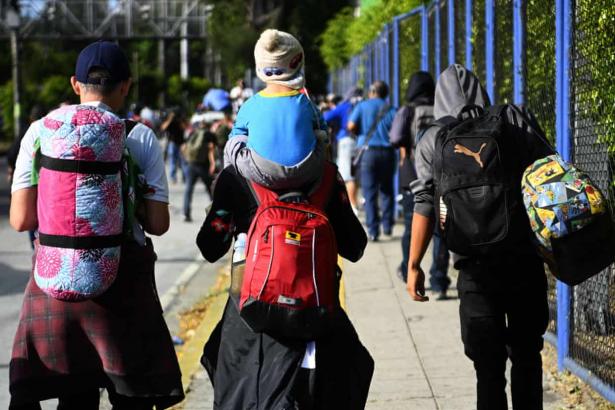 Department of State sponsored Human Rights Watch says 138 Salvadorans were murdered from 2013 to 2019 and 70 others were abused or sexually assaulted.

At least 200 Salvadoran migrants and asylum seekers have been killed, raped or tortured after being deported back to El Salvador by the United States government which is turning a blind eye to widely known dangers, a new investigation reveals.

Human Rights Watch has documented 138 deported Salvadorans murdered by gang members, police, soldiers, death squads and ex-partners between 2013 and 2019. The majority were killed within two years of deportation by the same perpetrators they had tried to escape by seeking safety in the US.

The report, Deported to Danger: United States deportation policies expose Salvadorans to death and abuse, also identifies more than 70 others who were subjected to beatings, sexual assault and extortion – usually at the hand of gangs – or who went missing after being returned.

El Salvador, the most densely populated country in Central America with just over 6 million citizens, has one of the world’s highest rates of homicide and sexual violence. In addition, almost 11,000 people were registered missing during the last decade – more than the number of people who disappeared during the 1979-1992 civil war.

Authorities are largely ineffective in protecting the population from this violence, which is often perpetrated by street gangs which have 60,000 or so members across the country.

Amid widespread terror and impunity, the number of Salvadorans fleeing has soared, with asylum applicants in the US increasing by almost 1,000% in five years to 60,000 in 2017, according to UN figures.

The dire security situation is well documented, but despite this, the US continues to deport Salvadorans to face abuse and even death, according to HRW.

For instance, 17-year-old Javier escaped gang recruitment in 2010 and sought asylum in the US where his mother Jennifer had already fled. His asylum application was rejected, and Javier was deported in early 2017, aged 23. Four months later he was killed by members of the Mara Salvatrucha-13 gang.

“The United States has to have known this was happening because the cases were publicly reported and more importantly because Salvadorans make it clear in asylum applications that this is their reality. But this reality is ignored or not believed by US authorities,” said Elizabeth Kennedy, co-author of the report.

International law prohibits the US from returning anyone to a country where they face serious risks to their lives or safety.

About three-quarters of the 1.2 million Salvadorans living in the US without citizenship lack papers or hold a temporary legal status making them vulnerable to deportation. Between 2014 and 2018, the US deported 111,000 Salvadorans, and granted asylum to just 18.2% of applicants – the lowest rate in the region.

Deportations – and violence against deportees – is not a new phenomenon. But the approval of asylum claims plummeted since the Trump administration rolled out a series of hostile policies including Remain in Mexico – officially known as Migration Protection Protocols – and imposed tight restrictions on gender-based and gang-related grounds for asylum.

“The attack on asylum is unique in the Trump administration, which has put even more Salvadorans – and others – at risk of deportation, and made it much less likely that they are able to even present their case to get effective protection,” said Kennedy.

The actual number of killings and attacks is probably significantly higher than reported as most crimes in El Salvador go unreported, state violence are covered up, and it’s too dangerous for journalists to enter some neighbourhoods.

Alison Parker, managing director of HRW’s US programme and co-author of the report, said: “Salvadorans are facing murder, rape and other violence after deportation in shockingly high numbers, while the US government narrows Salvadorans’ access to asylum and turns a blind eye to the deadly results of its callous policies.”