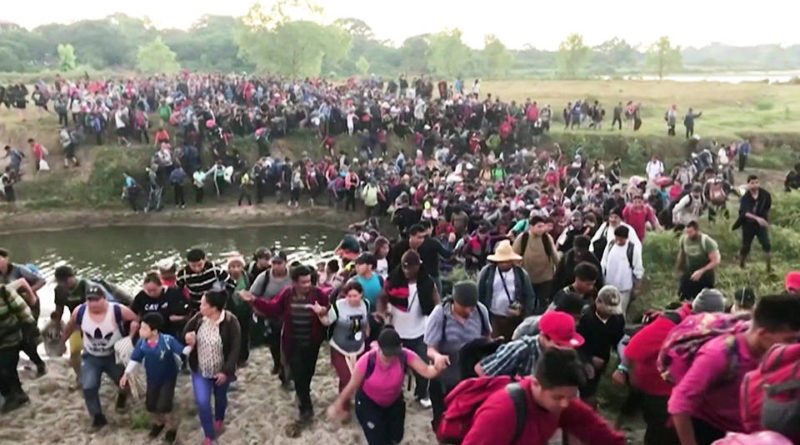 In Mexico, soldiers in riot gear used batons and pepper spray Thursday to beat back a caravan of hundreds of Central American migrants and asylum seekers after they crossed into the southern state of Chiapas from Guatemala. Among the injured was a pregnant woman who was left unconscious by the assault. Mexican officials say about 800 people were rounded up and bussed to a nearby immigration jail.

Mexico's National Guard clashes with members of the latest caravan of Honduran migrants and refugees after they crossed from Guatemala into Mexico this morning. AMLO once said he wouldn't do "another government's dirty work" but he's now enforcing Trump's immigration policy. https://t.co/Shj5r80dqk

Last week, President AMLO pledged to provide jobs to thousands of the migrants as long as they applied for asylum in Mexico — and not the U.S. But many of those arrested in another immigration roundup earlier this week say they were lied to. This is José Henríquez, one of over 400 asylum seekers deported to northern Honduras on Thursday.

José Henríquez: “Over at the Mexican border, they tricked us. They told us that in Mexico they were going to give us jobs, that there was employment for 4,500 people. And it was a lie that there were three states ready to receive all the Hondurans who wanted to work there. But they only deceived us.”