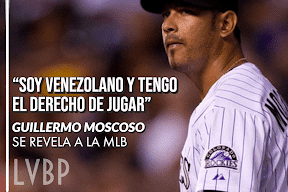 Venezuelan pitcher Guillermo Moscoso has objected that the Major League Baseball Association (MLB) prohibits players from participating in Venezuelan championships, even Venezuelan players playing in the US.

In a message spread through his Twitter account, the Creole player raised his opinion in the face of the decision of the association, regarding players participating in the Venezuelan Professional Baseball League (Lvbp).

This decision is due to guidelines of the illegal and criminal blockade maintained by the United States Government against Venezuela.

“I am Venezuelan with American citizenship and they are telling me that I cannot play in Venezuela. I have not belonged to any team in the United States since 2013. I am Venezuelan and I think I have the right to play. Or will they impose sanctions if I play in my country?” Was the message that the professional of the ball wrote and cited by media specialists in sports. However, when corroborating the text in the official account of the player it was not possible to find it.