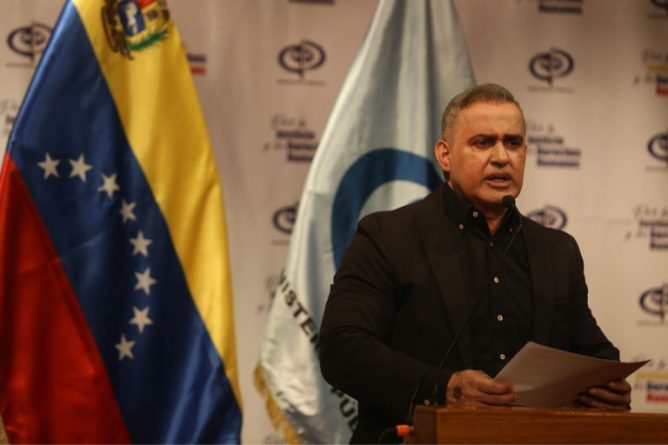 In 15 months the Public Ministry (MP) has uncovered 18 corruption schemes, among which are the irregularities in Petróleos de Venezuela (PDVSA), money laundering, importer fraud with currencies of Cadivi and Cencoex, among others, informed the Attorney General of the Republic, Tarek William Saab.

“In total, since our arrival, we have uncovered 18 corruption schemes that have cost the country billions of dollars. In these cases there are 96 officials arrested, all accused and 5 have already been convicted, “said Saab, from the headquarters of the Public Ministry, in downtown Caracas, in a brief on his 15 months of management, since he was appointed by the National Constituent Assembly (ANC).

It indicated that for crimes of this type, 1,114 people were apprehended, 1,282 accused persons, 751 convicted for admission of the facts and 56 convicted at the trial stage.

By the investigations about irregularities in Petróleos de Venezuela (Pdvsa), “the corruption schemes in the joint venture Fertinitro, the repurchase of diesel from the Paraguaná Refining Complex, the embezzlement of Pdvsa-Gas Colombia and the case of the Satellite Office of PDVSA Services, among others, “he said.

For the import fraud they issued an arrest warrant against the owners of the García Armas Business Group that embezzled 50 million dollars, through overbilling and simulation of imports.

There is also the $ 14 million fraud carried out by four companies that simulated imports of fertilizers and agricultural machinery.

Likewise, the Prosecutor’s Office filed an accusatory brief against Diego Salazar Carreño and José Luongo for their responsibility in the laundering of more than 1,347 million euros, through the private banking of Andorra.

Similarly, during the management of Saab, the criminal investigation related to scams committed by the trading company ABA, the capital market and brokerage houses, with 19 arrest warrants. Therefore, a total of 10,727 charges have been filed for the legitimacy of capital and 4,116 accusations, he said.

Fourteen people in the country and four foreigners were arrested, dismantling a drug trafficking network that sent shipments to Europe and the Middle East, the prosecutor said.

To this must be added the dismantling of the Malecón Cartel, for which 14 of its members were arrested and “the request for the extradition of their capo,” he said.

Between August 2017 and October of this year, 698 vehicles were seized that were used for drug trafficking, with 17,341 kilos of drugs, representing 43% of the total illicit substances seized.

Given this, there are 1,917 processed by this mode of land traffic. In addition, 26 airplanes dedicated to drug trafficking were captured. Also, 14 clandestine airstrips were found that were disable by the Bolivarian National Armed Forces.

“I want to highlight that for these facts there are a total of 51 people apprehended. The tendency that we inherited from the previous administration to produce more dismissals than accusations in drug cases was broken. “Saab added.

During his statements, he stressed that 96 cases have been brought in for femicide, with 85 suspects in custody, 78 indictments and 73 accusations.

“The Venezuelan family called for reflection so that this type of intrafamily violence does not exist that sometimes they do not denounce,” he emphasized.

On the other hand, he mentioned that 77 people have been deprived of their liberty for human trafficking. as well as 105 indictments and 73 accusations.