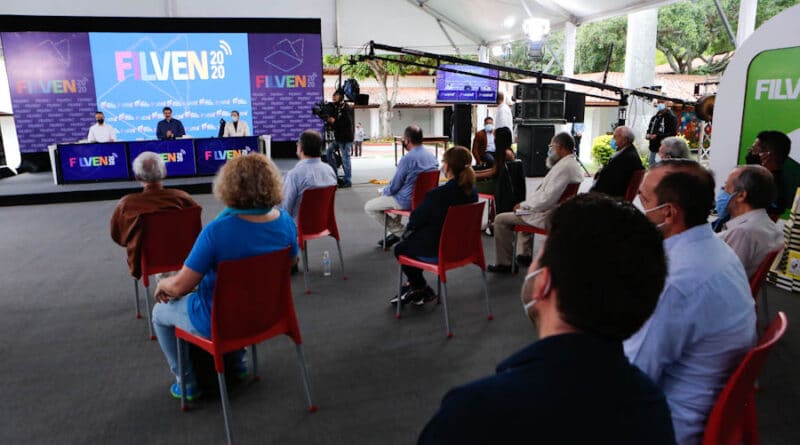 This Thursday the XVI International Book Fair of Venezuela (FILVEN 2020) was inaugurated to the rhythm of Mexican mariachis, overcoming both the atrocious blockade by US imperialism and the COVID-19 pandemic. The event was led by the President of the Bolivarian Republic of Venezuela, Nicolás Maduro, who was accompanied at La Casona Cultural Aquiles Nazoa by the Minister for Culture, Ernesto Villegas; Honored Writer Earle Herrera; Atamaica Nazoa, daughter of the second Honored Writer Aquiles Nazoa; and by Raúl Cazal, president of the National Book Center (CENAL), among other personalities.

“Reading unblocks” is the motto of this sixteenth edition of the main literary festival in Venezuela, that features Mexico as an Honored Country, and includes a record number of activities, most of which can be enjoyed virtually through FILVEN 2020’s Youtube channel, and its social media networks.

The head of state thanked the writers, as well as the readers, who faced the impediments related to the blockade and the pandemic, and supported the realization of FILVEN 2020.

International guests
Those present in the ceremony were accompanied in virtual form by the writer Paco Ignacio Taibo II, general director of the Fondo de Cultura Económica (FCE), a Mexican publishing house that, despite the blockade, brought more than eight thousand titles at affordable prices for the wallets of Venezuelan people.

The Mexican writer expressed his satisfaction at the realization of FILVEN 2020 despite adversities and stated that unblocking, more than an obligation, is a pleasure, and stressed that the book should not be feared, but considered as a great instrument of human interconnection.

He highlighted the agreement signed last year between the Fundación Librerías del Sur (FLS) and the FCE, which will allow thousands of titles to be read in both Mexico and Venezuela.

Pem Jean highlighted that from that date on, more than eighty thousand books will be made available in that space by the FCE and the Venezuelan publishers Monte Ávila Editores, El Perro y la Rana and the Ayacucho Library will also be accessible, even virtually.

The writer Arantxa Tirado accompanied the group from Spain. She has dedicated herself in her country to telling the truth about the international media campaign that exists against Venezuela.

From Chile, the writer Pedro Santander, who brings to the fair the book The Communication Battle, celebrated the inauguration of the FILVEN; and from Paris, the Colombian writer Hernando Calvo Ospina also showed his support for the literary festival.

Regarding the support from international writers, and following the ratification by the European Union of the sanctions against Venezuela, President Maduro invited all those who want to come to the country on December 6 to the fiesta of democracy, the election of the new National Assembly.

Earle Herrera honored
The journalist, professor, former parliamentarian and constituent Earle Herrera, as Honored Writer, congratulated Mexico for being the Honored Country, recalling his childhood when he saw the films of the golden age of Mexican cinema. He congratulated Mexico, which dared to defy the blockade and bring its books to FILVEN 2020, and highlighted that historically Venezuela, from the Francisco de Miranda and Simón Bolívar printing presses, has challenged different imperialist blockades.

After his words, his book Rocinante Ate Many Plums in the Park was launched, a text of stories that Herrera wrote for his children and that now remains as a legacy for his grandchildren and all Venezuelan children. FILVEN 2020 runs virtually until November 15, but from November 16 until it ends on November 22 it can be visited physically, with adherence to biosecurity measures due to the COVID-19 pandemic, at La Casona Cultura Aquiles Nazoa in Caracas.

• The Violent Breathing of the World (Emecé, 2018), Angela Pradelli (Argentina).

• Pasolini or the Night of the Fireflies (Nocturna, 2015), by José García López (Spain).

• The Route of Hospitals (alfaguara, 2019), by Gloria Peirano (Argentina).