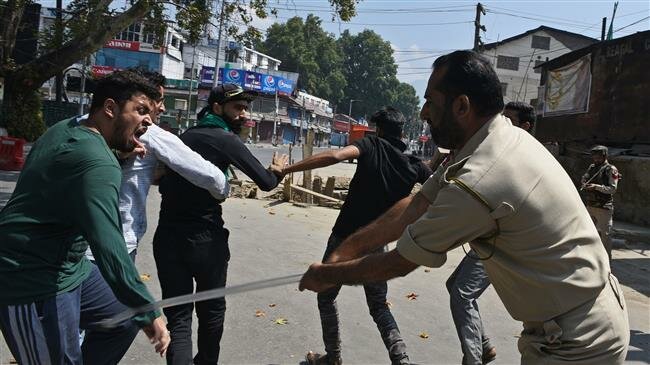 New Delhi has imposed a curfew in several parts of in Indian-administered Kashmir, banning Shia Muslims from taking part in annual religious ceremonies.

The Indian government banned mourners from holding processions commemorating the martyrdom of Prophet Muhammad’s grandson Imam Hussein, which reach their climax on the 9th and 10th day of Muharram.

Muharram is the first month of the year according to the Muslim lunar calendar, and traditionally processions are held for the first 10 days of the month to observe the martyrdom in battle in 680.

Shia Muslims typically intensify their expression of suffering on the Ashura day, that this year falls on Tuesday.

“People are advised to stay indoors and not venture out of their home,” the police announced.

Reports said at least 12 locals and six troops were injured on Saturday evening as people taking part in the traditional mourning procession clashed with troops trying to stop it.

The clashes continued till late night during which troops fired tear gas and pellets, one unnamed official told Reuters.

The route of the procession through the city center has been barricaded by armed troops wearing helmets and bulletproof vests.

Tensions are already high in the region due to the revocation of Kashmir’s special status by the Indian government last month.

Kashmir has been split between India and Pakistan since it was partitioned in 1947. Both countries claim all of Kashmir and have fought three wars over the territory.

Featured image: An Indian policeman clashes with a Kashmiri man during a strict curfew in Lal Chowk area of Srinagar on the 8th day of Muharram on September 8, 2019. (Photo by AFP)