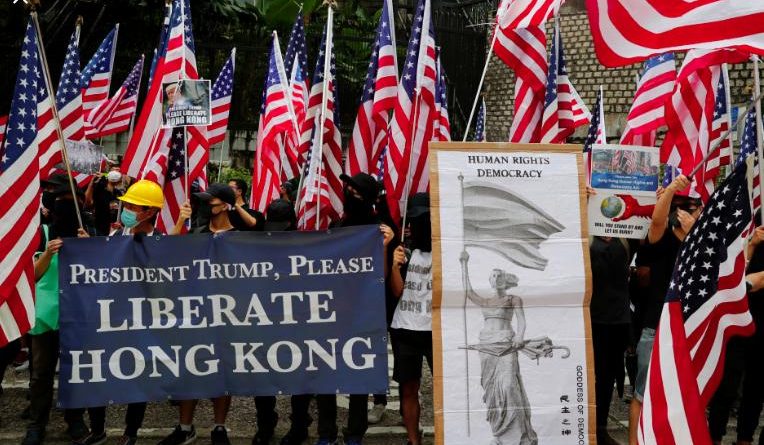 Since early June protesters in Hong Kong with visible signs of violence have disrupted the life of most Hong Kongers and foreigners using as an excuse the proposal of an Extradition Act introduced in response to a killing of a Chinese woman (femicide) and the fleeing of the perpetrator from Taiwan to Hong Kong, making his extradition to Taiwan or to any other China’s territory impossible.

The leaders of the protest have continued with their destabilization strategy even though Carrie Lam, Hong Kong’s CEO, announced the withdrawal of the proposed law on September 4th. In parallel, already public knowledge, there are the meetings of protest leaders with diplomats from UK and the US and in recent days, more visibly, the US and UK flag in these right wing, pro colonial protests, very similar to the ones promoted by the US in Venezuela.

Below you can read the communique in English (here the official document in Spanish):

The Bolivarian Republic of Venezuela expresses its strongest rejection of the acts of violence that have occurred in the Hong Kong Special Administrative Region in recent weeks, events openly promoted by foreign interests, with the aim of damaging internal order, Public security and the territorial integrity of the People’s Republic of China.

Having suffered similar events induced from abroad in its own territory during the years 2014 and 2017, Venezuela alerts the international community about the repetition in Hong Kong of a similar pattern, which is executed by promoting violent demonstrations and acts of vandalism that threaten life, stability and public and private assets, pretending to alter the peace and laws of the People’s Republic of China.

The Bolivarian Government of Venezuela stands in solidarity with the Chinese people and their institutions and supports the efforts that national and local authorities make to maintain public tranquility and peace, with the certainty that once again unity, patriotism and dignity of the Great Chinese Nation will prevail against the imperialist ambitions of yesterday and today.