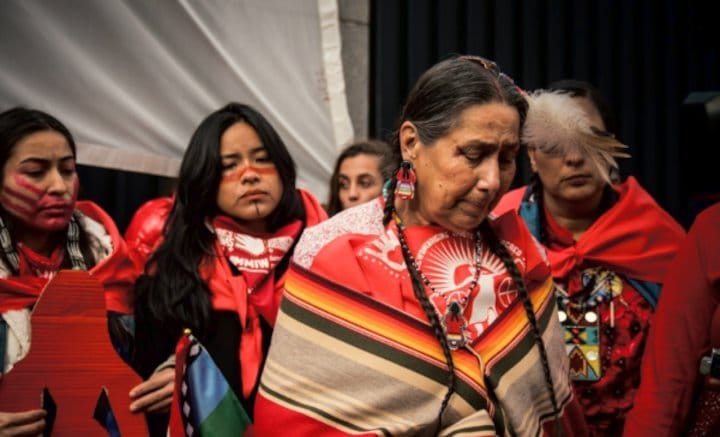 December 10 — Over 75 Indigenous activists and their allies demonstrated in front of the U.S. Embassy in Madrid, Spain, to demand justice for missing and murdered Indigenous women, girls and Two-Spirits (MMIWG2S). The delegation was removed from the sidewalk by Spain’s National Police and followed for blocks. The police liaison with the group was held back and forced to show his documents.

In 2016, the Urban Indian Health Institute found that only 116 out of 5,712 cases of MMIWG2S reported in the United States were recorded in the Department of Justice’s federal missing persons database.

Many of these cases have been the direct result of extractive fossil fuel industries implanting “man camps” for transient industry workers located near Native American communities. This is especially apparent for rural areas in states such as North Dakota and Montana, which continue to be the epicenter of violence against Indigenous women. Additionally, according to the Urban Indian Health Institute, 70 percent of Alaska Natives live in urban areas, where Indigenous women not only go missing, but are underreported by municipal police agencies and all too often ignored by local media. We can no longer allow for this issue to be invisibilized by the government or the media alike.

“Whether in rundown motels or pop-up camps, certain things hold true. There is an influx of transient workers who bring alcohol, drugs and violence, such as rape, murder and human trafficking,” says Casey Camp-Horinek of the Ponca Nation in Oklahoma. TransCanada and other fossil fuel corporations continue to build pipelines, like Keystone XL, that transport tar sands oil from Canada through jurisdictions in the United States that lack the bodies of justice such as Free, Prior and Informed Consent, as well as transparent intercommunication between multilateral enforcement agencies, which are necessary to protect Indigenous communities and allow them to practice their respective cultures. The overarching result is violence against Indigenous lands, which perpetuates violence against Indigenous women.

It will take much more than an Executive Action that allocates a perfunctory $1.5 million in federal dollars to address and dismantle human rights violations against Indigenous women and Indigenous lands. And pursuant to the 1991 Principles of Environmental Justice, governmental acts of environmental injustice are considered a violation of international law, the Universal Declaration On Human Rights, and the United Nations Convention on Genocide.

“We call on the global community and all peoples of the United States to join our call for action, to join our call for recognition and to join our demands for the real action it will take to protect and respect Indigenous women,” said Bineshi Albert, Movement Director of the Indigenous Environmental Network. “This is not a political issue that should be used to generate votes, it’s a matter of life and death, of dignity, which is why all federal initiatives must include local Indigenous communities in positions of leadership that recognize and respect our sovereignty,” Albert continued.