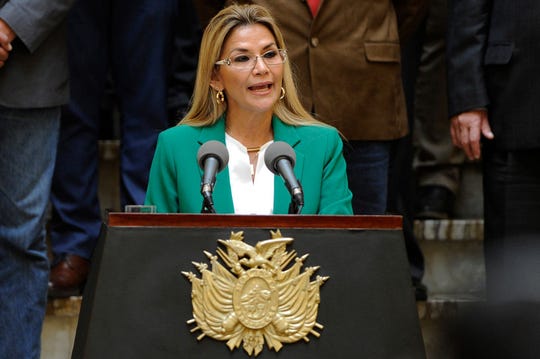 Interim President Jeanine Anez’s remarks about “savages” recalled a centuries-old past of repression and violence.

This is how the Indigenous peoples of the Western Hemisphere are referred to by the openly racist regime that has recently taken over the reins of power in Bolivia in the wake of an anti-Indian coup stemming from a disputed election. More than 30 people were killed in November violence.

This was the latest racist rant used by interim, usurper President Jeanine Anez in early January when she asked for Bolivians (the country was reported 62% indigenous early in this century) to prevent the return of “ savages “ to power when referring to Evo Morales , the first indigenous president of the country.

“Let’s not allow any personal ambition, on the one hand, disperses the vote and that he wins again,” Anez said, according to the newsletter Resumen Latinamericano. “Let’s not even allow the arbitrary, the violent and the savage return to power. I think that it is the responsibility of all of us.”

She assumed the presidency holding above her head an enormous Bible, flanked by an aide displaying a large cross. Did she step out of a  16th-century time warp a la Pizarro?

Her reference to “savages” is so eerily  reminiscent of the Spanish conquistadors  led by Francisco Pizarro, who destroyed the Inca Empire in 1532. This was  a brilliant civilization renowned in the annals of human history.

This was  a civilization where no one was hungry, ill-fed or ill housed. It was a society of advanced technological and engineering achievements surpassing Europe of the same time in all but one respect: weaponry. Europeans judged civilizations  as inferior  that  did not have  technologically equal weapons.

The Inca civilization excelled in constructing huge cities composed of monumental architecture. The Inca structures, many of which stand to this very day, were ingeniously made of huge stone blocks fitted together so well that a knife cannot be thrust between the stones.

The Inca engineers were expert at terracing the mountains for agriculture and raising huge quantities of corn and other crops. They diverted mountain streams creating these terraces, carrying water great distances, often channeling it underground, creating spectacular outlets and fountains. Potatoes also originated in Inca land and the people developed over 3,000 varieties that spread worldwide. This crop was revered in Inca civilization.

How does the interim  government intend to represent the majority of the people it calls “savages”? There are 36 recognized Native ethnicities, of which the largest are the Quechua and the Aymara. Evo Morales is Aymara. Having been to the land of the Inca Empire, I can  personally attest to the resiliency and richness  of the indigenous   culture.

Remarks reach beyond Bolivia at the present

The use of the racially pejorative term is an insult to all the indigenous of the Western Hemisphere including of course the local native community of Nashville. In the early history of Nashville, this was a term freely tossed about by the invading white settlers.

The use of the term “savages” by the interim president of Bolivia is indicative of the racism that is still rampant in parts of this hemisphere. Two examples come so painfully to mind, one related by a good friend and the other personal experience.

An internationally known U.S. indigenous poet recounted that in the late 1980s she was returning by plane from a conference in Brazil and was sitting behind a group of American and Brazilian businessmen who were discussing hunting in that country. She overheard one of the Brazilians remark that Brazil was one of the few countries “where you can still hunt Indians.”

On a personal level, I can relate that a few years ago, while traveling with my family through a small town close to one of the South’s few native reservations and stopping at a motel to rent a room for the evening, I was abruptly told by the white male motel manager, “We don’t rent rooms to Indians.”

Incredible as it may seem, this was in this century. Coming full circle, we are still called “savages” in the 21st century. This has to stop.

Albert Bender of Nashville is a Cherokee activist, journalist and author of “Native American Wisdom.” Email him at albertbender07@yahoo.com.