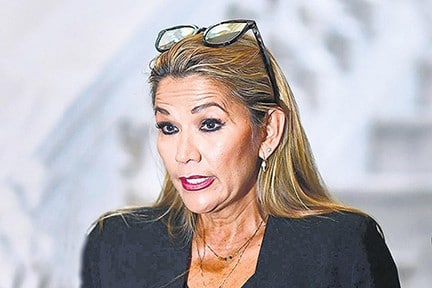 The de facto president of Bolivia can’t be sleeping peacefully these days. Last week was particularly unnerving for her. First, she was forced to leave by a crowd from El Alto, a city where one of two massacres took place shortly after she took power. Then on Thursday, she had to run with a bulletproof vest on from a crowd that even shattered the windows of the vehicle of Education Minister Victor Hugo Cardenas by exploding a large firecracker on it.

Bolivian-Argentinean journalist Veronica Zapata wrote about it: “Like all criminals who return to the scene of the crime, she appeared surrounded by hundreds of police and military officers to participate in a session of honor at the Municipal Council for the 35th anniversary of the founding of El Alto on March 6.” What was she thinking — that after the massacre people would have forgiven her for this crime? Now she has discovered that not only do the citizens of El Alto remember, they will not negotiate their dead. In short: the massacre at the Senkata gas plant is still fresh on their minds.

Of course, after that, she didn’t attend any more events on Friday. It would have been a provocation. The Alteños don’t want her and they let her know it. The same goes for her party’s former candidate Oscar Ortiz, who also had to run away during the session of the Senate and was protected by the police. “Murderer, murderer, murderer” shouted thousands of Alteños to the president and “mutiny, mutiny, mutiny” to the cops.

In addition, on Friday, Defense Minister Fernando Lopez, who was Luis Fernando Camacho’s operator with the military to carry out the coup according to the former civic leader’s own statements, had to attend a third congressional call to give his report. Lopez again did not attend and the senators and deputies ran out of patience. He was censured by more than two thirds and according to the Political Constitution of the State, this means his immediate dismissal.

And now there is none other than the repressive Arturo Murillo, who is Anez ‘s Minister of the Interior, who must choose between showing up and being asked uncomfortable questions or not going and being censured. If he attends he may also receive the sanction of the Congress and if it is by two thirds, he must leave the post.

Añez must choose between listening to the Constitution and getting rid of one (maybe two) of her strongest men in fear management or she herself can go on trial for responsibility. Meanwhile, in the Movement towards Socialism (MAS) the disagreements have been settled. And even the most accommodating of the deputies and senators who once made a pact with the coup power know that their political future depends on how strongly they condemn the regime. And every time you read the polls this point is validated.

No, these are not good times for the coup president, even more, if we add that the peasants have given her 72 hours to deposit the money to continue operating 400 projects that have been held up in her administration and the teachers are preparing a strike (on Friday there was a massive one in Sacaba, where another massacre was committed) demanding more support to compensate for the sub-standard quality of education, something that Finance Minister Jose Luis Parada has rejected.

Mahatma Gandhi’s grandson, Arun once said, “We’ve found that the easiest way to control people is through fear and the more fear you can instill in people, the more control you can have.” But that no longer works in pre-electoral Bolivia, which has lost its fear of repression, and with the arrival of 100 observers from the European Union and the offensive of human rights organizations against the massacres ordered by Añez, she cannot afford one more death from repression.

Simply put, what brought her to power is not a recipe that will work, no, in fact, quite the opposite.