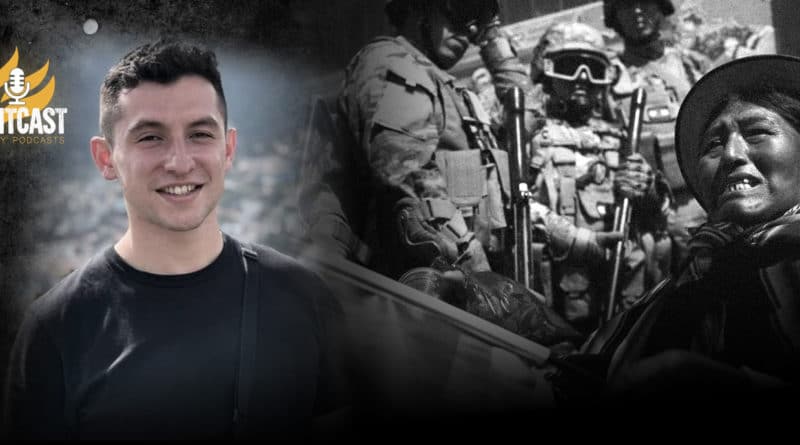 By Mnar Muhawesh and Whitney Webb

Welcome to the re-launch of MintCast, the official weekly MintPress News podcast hosted by Mnar Muhawesh and Whitney Webb. MintCast is an interview podcast featuring dissenting voices, independent researchers and journalists who the establishment would rather silence.

One such voice is independent Bolivian-British journalist Oliver Vargas. He joins MintCast to discuss his exclusive on the ground coverage of the post-coup crisis in Bolivia, including the country’s upcoming elections scheduled to take place on May 3.

Last November, the democratically-elected government of former Bolivian President Evo Morales was removed in a U.S.-backed coup that forced him to flee to Mexico and then to Argentina. Morales and his party MAS have since faced persecution, with several political allies and former Morales ministers now imprisoned. Other former ministers and officials have been forced to seek refuge in the Mexican embassy in the Bolivian capital of La Paz in order to avoid arrest.

In addition to the threats faced by Morales’ political allies, his supporters have also faced aggression from the far-right post-coup government that has killed scores of unarmed protesters and wounded even more, especially in the early days that followed the coup.

Despite this, Morales’ successor, Luis Arce, has emerged as the election frontrunner according to recent polls. Bolivia’s so-called “interim” president Jeanine Áñe, however, has vowed to “fight” to stay in power, a move that has fragmented Bolivia’s pro-coup right, which has failed thus far in uniting in their effort to prevent Morales’ MAS party from retaking power. This backdrop has led many to worry that Bolivia’s upcoming election could be marred by fraud and manipulation.

Earlier this year, Morales himself — despite being in exile in Argentina — announced his plans to run for Bolivia’s Senate. Following the announcement of his candidacy, Morales said he received numerous threats from the United States and was recently barred by a Bolivian court from running, a decision that Morales and his allies argue was orchestrated by the Trump administration. Morales has said he plans to appeal the court’s decision.

Oliver Vargas joins us to discuss the latest election news from post-coup Bolivia.

This program is 100 percent listener supported! You can join the hundreds of sponsors that make this show possible by becoming a member on our Patreon page.

Subscribe to this podcast on iTunes, Spotify and SoundCloud. Please leave us a review and share this segment.