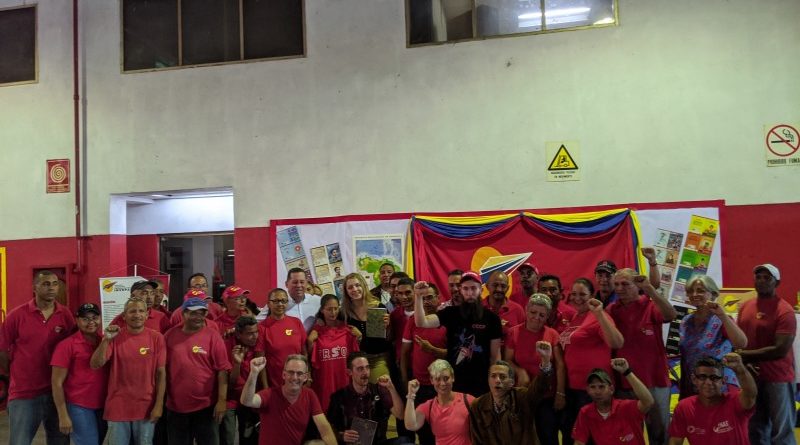 Francisco Torrealba, president of the Venezuelan Transport Workers Federation, elected Venezuelan National Assembly member, and important leader of the United Socialist Party of Venezuela (PSUV) invited Burke and four Teamsters to see for themselves the changes happening in Venezuela.

Fight Back!: Why did President Trump order U.S. Navy ships to patrol near Venezuela?

Tom Burke: It is a military provocation by the U.S., and it is dangerous. President Trump is growing desperate because the U.S. dirty tricks against Venezuela are failing. I was in Caracas a year ago on April 30 when Trump and Bolton tried a military coup against President Maduro. It failed miserably. We saw a group of rich women waving flags on a corner that morning, and later we saw bullet holes and chunks of concrete on the bridge near La Carlota airport where the coup fizzled.

The next day, on May 1 we witnessed over one million people, workers and unions, community groups, youth and women marching in support of President Maduro on International Workers Day. It was incredible to see. President Maduro is hugely popular, and people clearly admire his tenacity and courage. Maduro and the PSUV are leading the masses of people in building a new society.

Fight Back!: So why send the U.S. Navy during the coronavirus crisis?

Burke: Because it is criminal! There is a worldwide health crisis, people are living in fear, and Trump is making war threats. In sharp contrast, China sends medical supplies and reportedly discusses new loans. Cuba has 30,000 doctors, nurses and health professionals working side by side with Venezuelan colleagues, going door-to-door checking on people for the virus. The thousands of new clinics run with Cuban aid provide free and ongoing health care in a systematic way. For millions of Venezuelan people this type of health care never existed before. I have to say, solidarity will always defeat war and empire.

Fight Back!: Do you think the U.S. will go to war or perhaps launch military attacks?

Burke: Secretary of State Pompeo seems stupid enough to trigger a war that nobody wants, but the U.S. would be foolish to invade Venezuela. For 20 years now the National Armed Forces of Venezuela have supported the Bolivarian Revolution and its pro-people policies. The National Armed Forces are loyal and patriotic, respect democracy and the will of the people. Their generals down to their privates have a real spirit of serving the people. For the most part, those who are traitors exposed themselves already during the U.S.-backed coup attempts or in other ways, and have fled to Miami or Spain, or live in shame in Colombia.

Let me say, from what we saw on March 10 at a mass march in Caracas with over 600,000 people, I hope the U.S. does not try to invade Venezuela. There is a huge National Bolivarian Militia with over one million members trained to defend their country. They are like the Minutemen of the American Revolution; only lots of them are women. Venezuelans have taken their country back. They are ready to fight.

Venezuela is already under attack in many ways. The U.S. is hostile towards Venezuela’s leaders because they are independent and building a society where meeting people’s needs come first. Already a drone attack attempted to assassinate President Maduro and it injured seven Venezuelan soldiers on parade. It would be foolish to think the U.S. had no role in that. The U.S. threats are non-stop, the most recent being a $15 million bounty on President Maduro on fake charges.

I worry the U.S. could target Venezuela leaders with missile and drone attacks like they do to leaders in Middle East and African countries. These violent acts by the U.S. make solidarity trips all the more important.

Fight Back!: What about U.S. sanctions on Venezuela?

Burke: There is tremendous resistance to the U.S. sanctions in Venezuela. People understand who their friends and who their enemies are. Most people hate Trump and love Maduro, the same way they loved Chavez before. In my experience, even the wealthier people who want to oust Maduro, they despise Trump.

On March 9 we met with human rights lawyers and officials from SURES who explained how sanctions harm the people and the economy. Everywhere we went during the week, people welcomed us, but also told us how the sanctions make life difficult. Doctors described not obtaining drugs for diabetes or asthma, and postal union members could not get replacement parts for their delivery trucks.

We also visited two factories; one called Canaima making laptops, and the other factory printing notebooks, journals and maps for schools. We toured the assembly and production lines and watched workers fulfill the dreams of 6 million children who receive their products free of charge. In factories, the workers and management work closely together to overcome, or work around the problems created by sanctions.

Fight Back!: What can we do as anti-war and international solidarity activists here at home?

Burke: Well given the COVID-19 crisis, we can educate people about the benefits of the Bolivarian Revolution. For example, over 3 million new apartments and houses are complete, replacing shantytowns. We saw construction cranes operating all over the city of Caracas.

In terms of education, all children now attend public grade school and high school, with millions learning to play instruments in a unique orchestra program. There are 13 new universities and many young people are the first in their families to attend.

The CLAP food program delivers staples and necessities to the vast majority of homes, so hunger no longer haunts poor people as it did for generations. You can fill your gas tank for less than 50 cents. Rent, water, cooking oil, gas and public transport are so affordable, or free, that people rarely speak about it. For the vast majority, for the working people, life is good with the Bolivarian Revolution.

The Venezuelan people are our friends and the Bolivarian Revolution is something for us to learn from and support. One day perhaps the U.S. can have a “Worker President” like President Maduro.