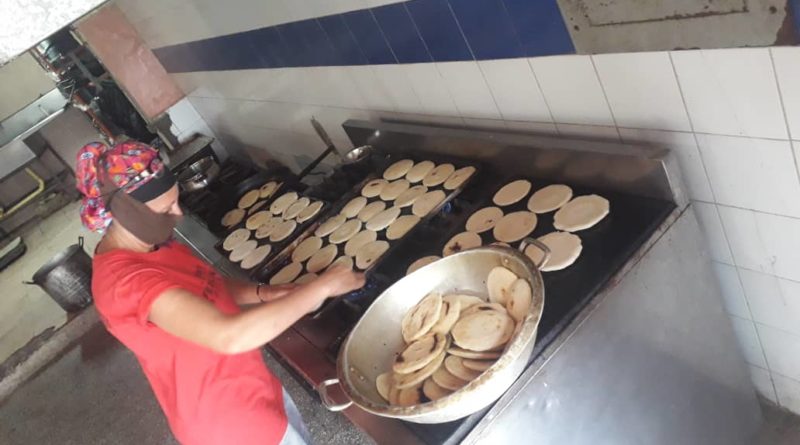 Learn about how the Patriotic Forces Alexis Vives (FPAV) of the Socialist Commune El Panal 2021, based in the popular parish of “23 de Enero” in Caracas, have been in charge of the processes around the School Feeding Program (PAE) to ensure that more than 200 boys and girls in the community receive their daily food, in an experience of communal self-government in times of Coronavirus.

Social and economic inequality will ensure that the virus discriminates.
The virus by itself does not discriminate, but humans surely do,
shaped as we are by the interlocking powers of nationalism,
racism, xenophobia and capitalism …

The expansion of Covid-19 on a planetary scale has made most governments and peoples of the world think about the best response to the so-called pandemic by the World Health Organization (WHO).

Among those who govern the nations affected by this virus there are two well-marked trends in how the situation should be addressed: There are those who have decided to paralyze the productive processes and daily dynamics of the population in order to implement a social and collective quarantine; while on the other hand there are the rulers who consider that stopping the economy of their nations would bring worse consequences for the whole, so they have not implemented measures for the confinement of the majority of the population.

Faced with both trends, to a greater or lesser extent, it is the sectors of the population with the least economic resources that end up being the main ones affected by the expansion of this pandemic in the world, since they do not have the material resources to carry on the conditions of a social quarantine, a method that until now has been shown to be the most efficient to avoid infections and collapse.

In the Bolivarian Republic of Venezuela, the first of the aforementioned options was chosen and President Nicolás Maduro decreed a state of national emergency and collective social quarantine when the first two cases were registered in the South American nation.

This decision implied the suspension of face-to-face classes throughout the national territory, but the instruction was directed so that the school canteens should remain active, through which the distribution of food to millions of children covered in the School Feeding Plan (PAE) is guaranteed.

These are the type of social assistance policies that have allowed large contingents of Venezuelans to get out of the margins of poverty and extreme poverty, for which they represent achievements that the organized communities recognize and defend, and that also are strategic in the [convergence of challenges] caused by the coronavirus

“It’s the commune that is the place that transforms realities”
A very illustrative example of these struggles is given by the Patriotic Forces Alexis Vives (FPAV) in the Socialist Commune of El Panal 2021. This group lives in the popular parish of 23 de Enero in Caracas and they have lead the vanguard in grassroots organization processes in order to satisfy, through self-government, the different needs that are diagnosed in the community

Anacaona Marín is a member of the FPAV and spokesperson for La Comuna el Panal 2021. She offered us her testimony about the recent and solid experience in the management of soup kitchens that this political organization implements.

For the year 2018, the Cristopher Hernández dining room was inaugurated – in honor of a militant who was assassinated seven years ago – a space that is financed with the surplus generated by the different productive units of La Comuna, and currently benefits more than 120 infants and 25 senior adults with lunches without any charge, explained Anacaona.

“We start from a very inspiring experience, based on planning, so we started with a census of vulnerable people in the sector (…) it is the need for La Comuna to be the entity that transforms realities and tries to meet the needs of the community, it’s the fact that La Comuna is part of the government of the people, of the local government (…) we are going to celebrate two years of this popular and social dining room,” the FPAV militant pointed out.

These powers rest in the people through a platform for their organization such as La Comuna, and it is part of the process of building a new model of self-government -from and for the bases- that is being developed in Venezuela.

Anacaona explains that it is in compliance with this principle of joint responsibility that the FPAV decided to intervene in the dining room of the Gabriela Mistral Educational Unit located in the territorial area of the Comuna el Panal 2021. This action was taken after repeated complaints from the community about irregularities in the management of the resources that guarantee through the PAE (a government program) the feeding of boys and girls in the area. The intervention takes place on the same days that the national emergency decree comes into effect due to the appearance of coronavirus cases in Venezuela, so the dining room became a strategic tool to address the exceptional situation regarding the care of vulnerable and low-income people.”We had been respectful of the dynamics of the people who were responsible representing the Ministry, but we had notifications from the community that the administration of these resources were not being carried out in the best way and we intervened (…) we took charge as a Commune of the inventory process, everything that was there, after we inventoried it and had the keys, we proceeded to talk with the Processing Mothers who work there and established rules that would govern the real and proper handling of these foods with their respective monitoring and control method,” Anacaona Marín added.

RELATED CONTENT: Fourth Shipment from China Arrives in Venezuela on Saturday to Reinforce the Fight Against Coronavirus – State of Alarm Extended for 30 Days

It is necessary to clarify that “Las Madres Procesadoras” is the name given to women who work as cooks in school canteens and who are regularly comrades who live in the same sector where the educational unit is located, which is why they are mothers, aunts, grandmothers or neighbors of the same boys and girls in the school. They were crucial in the intervention of the UEN canteen Gabriela Mistral, since they were the ones who could corroborate the complaints about irregularities in the management of resources and decided to support the intervention and continue working under the new community administration from day one.

Thus, the dining room begins to offer service from Monday, March 17, serving 92 people that first day; the following day 142 people attended; 152 people on the fourth day, and thus increased their capacity thanks to the support of the entire community and the experience accumulated in this area by the FPAV, benefiting 220 children and people with functional diversity during the global pandemic on a daily basis, says Anacaona.

Even the method of distribution has been revolutionary since the intervention of La Comuna: “The students enrolled in the school are served first, their representative comes as the boys and girls must stay at home, they bring their respective returnable container to collect lunch – an Ecosocialist measure to reduce the production of garbage by disposable materials – the elderly and low-income children are then cared for to provide lunch to these vulnerable compatriots, especially in the context of the arrival of the coronavirus,” explained Marín. The spark that lights the plaire
Continuing the reflections with the militant comrade of Alexis Vive, she told us: “No one better than the people themselves knows what their needs and realities are, I believe that we must take the leap once and for all and that in each of the communities where political control, where there is organization, everything that is transverse to a decent life that is: health, sport, culture, supply, food, medicine, education … All this must be administered, controlled and guaranteed by organized communities ”

Under this premise and with the impulse of the success obtained in the UEN canteens Gabriela Mistral and Cristopher Hernández, the community of January 23, hand in hand with the FPAV, advanced on the popular control of two other student canteens belonging to the Centers of Initial Education El Nuevo Amanecer and Lea de Serfaty.

These canteens continue to receive inputs assigned by the national government through the PAE, but it has been the community that organized a volunteer service distributed in different shifts and times to guarantee, together with the Alexis Vive militants, the processing of food and daily deliveries of 150 meals from the Nuevo Amanecer dining room and another 110 meals from Lea de Serfaty. The coordinated work of a political organization at the service of the needs of the community such as La Comuna el Panal 2021, and the mobilization and awareness of a people who assumed the slogan that says “only the people save the people”, allow current circumstances, where people with low economic resources are the ones who have the most adverse conditions to overcome the pandemic, more than 625 meals a day are being distributed free of charge to boys, girls, older adults and people with functional disabilities in the popular parish of 23 de Enero.

When I asked Anacaona Marín if you could define in a sentence this effort that you are making, what would it be? She answered: “Government of the People, it is the people assuming leadership in the different situations that are urgent for them, it is the people organized with their vocations, with their charisma, with their honesty (…) I think it is time for solidarity to flourish in this type of contingency as a value and a human principle, it is time that the honesty that resides in us emerges to combat the human misery that seeks to privatize everything, even health and food ”

The communal organization proposal launched by Hugo Chávez during his government continues to be the response mechanism that broad organized popular sectors in Venezuela apply for the construction of real power that allows them to respond to their needs, and this formula has once again been successful to resist and overcome the presence of a pandemic in the Venezuelan territory.

The Patriotic Forces Alexis Vives under communal management and in these adverse circumstances, is guaranteeing more than 625 meals a day (4,375 weekly) to the most vulnerable people, but they are also making and distributing face masks, at the same time that they distribute house by house educational activities for the smallest, guarantee the distribution of food in coordination with local producers, in short, they have been, from the dynamics of self-government, the hand that has guided the helm of their community towards overcoming this crisis.