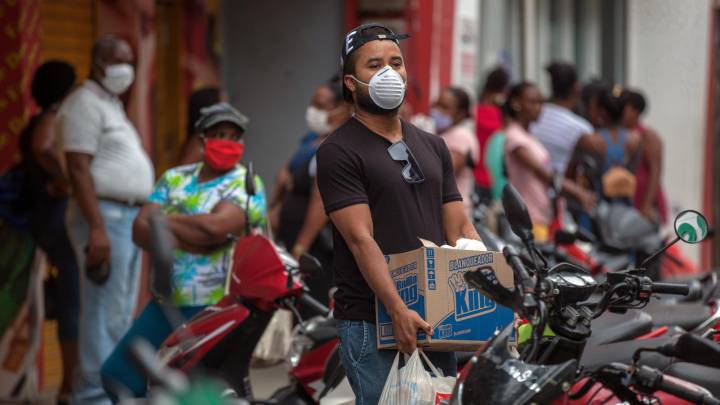 RELATED CONTENT: WHO: Venezuela Leading Codiv-19 Test Practiced in South America – Even in Per Capita Analysis
Monica continues… to this we must add: the abandonment of the Colombian countryside, the war that does not cease, the systematic and permanent murder of leaders who are the ones who are driving the structural changes that the country needs; leaders who in these conditions of confinement are exposed in their homes and continue to be assassinated; the low wages of workers, plus the privatizations of basic services that have been taking place since the end of the 80s. A reality with which the crude economic privileges of large companies and the financial system contrast.

How do you evaluate the measures taken by the Iván Duque government?
MD: It must be said that the government’s response was late, a quarantine was imposed from March 25 to April 13 (not even a month) after strong pressure from various sectors and some analyzes that exposed what the panorama was in the country but a quarantine was imposed. There was pressure in every way to close the El Dorado airport, one of the busiest in Latin America, and Duque directly refused to do so, they say that his sister is related to the Avianca company; the truth is that even today the airport is not closed, although it does not offer commercial flights.
On March 21, the government issued a decree to deal with the situation: decree #44 in which a fund is created (El Fome) and it is established where the money will come from and what it will be used for. Where does the money come from? From the savings and stabilization fund (which are the country’s royalties) and from the national pension fund of territorial entities that are funds of the country’s municipalities and departments.
What is it going to be used for? To give resources to state entities that need it to overcome the emergency. To pay logistics and operations from the same fund; make temporary transfers to support the financial sector; buys stocks, titles and bonds issued by companies of national interest; finance companies of national interest; make transfers to the national government. I am saying it as it is written.
In other words, the Duque government leaves the territories without resources to overcome the crisis and, on the other hand, creates a decree whose center of gravity is support for the financial system and large companies that, incidentally, are not the ones that generate employment in Colombia. According to Dane, 80% of the employment generated in Colombia is by small to medium-sized companies. Duque is granting benefits to the sector that generated the most profits in 2019, the financial sector that had profits of 10.2 trillion pesos, while the health sector is in crisis, since it has been underfunded for years, because not only have they not put money into them, but they close as many hospitals as they can.

RELATED CONTENT: Quarantine (XII): The Great Test
The sub-president’s (that is how Ivan Duque is called by many Colombians) plan can end in a terrible catastrophe. Proposals are being made by various forces, which they are going to have to take on because with Decree #444, they are seeking to safeguard big capital, the real problem will not be addressed. The Farc party has designed a 9-point shock plan that aims to protect ordinary people and that covers from the strengthening of hospital infrastructure, a basic income, free services including internet, deferment of debt, to regulation of food prices and incentives to strategic sectors (production, transport and food marketing); among others, the resources must come from the cancellation of the external debt, from international reserves,
After the diagnosis of the first cases of Covid-19, a situation was reported in the prisons of Colombia with a total of 23 people killed. What were the facts and the motivations?
MD: On Saturday, March 21, in La Modelo, Buen Pastor (women’s), La Picota (women’s), Picaleña, El Pedregal, Cómbita, Jamundí, La Tramacúa prisons, among others, a series of protests took place for decent treatment and to correct precarious conditions. Already in 1998 the Constitutional Court had declared prisons in a health emergency; to this day nothing has been done. This series of protests specifically demanded the activation of an efficient contingency plan to deal with an eventual outbreak of coronavirus in the penitentiary centers, they proposed to decongest the penitentiary centers through intramural release, measures of house arrests, humanitarian liberation of people deprived of liberty – including people over 55 – they proposed measures to avoid large numbers of people concentrated in patios and common areas. By that time, 4 cases of coronavirus had already been confirmed in prisons. Among the proposals was also the requirement that custodial and administrative personnel not to enter or leave the premises without due preventive measures, sanitary protocol; to equip the prison population with face masks, soaps, antibacterials and other necessary supplies to guarantee cleanliness in the different spaces.
It was also proposed to speed up amnesties and conditional liberties for the people who signed the Havana peace agreement – former FARC combatants – but what was the State’s response? The murder of 23 people under the staging of an escape attempt, the minister (of Justice of Colombia, Margarita Cabello) says that they were forced to repress, and ignores that a request had been made by numerous organizations, including the Farc party, so that a humanitarian solution to the conflict could be found, and adequate measures would be implemented to avoid the pandemic, and not just repression.
In the course of these murders, several deprived of liberty, including four members of the Farc party, including José Ángel Parra, who has a disease that makes him dependent on medications, were clandestinely transferred to the La Picota and Buen Pastor women’s prisons. The family of these four comrades achieved communication several days later and established that the comrades are in the Picaleña prison, a prison where they do not have electricity, they do not have a bathroom, they sleep next to their own feces, they do not have means to clean it, only occasionally the custodians bring up a bucket of water for them to remove the feces, it is a very humid place and they are crowded.
At this moment in La Picota there are 170 militants of the Farc party, prisoners of the State since they are sheltered by the amnesty and pardon law that arises from the peace agreement signed in Havana, but that this government of Iván Duque has decided not to recognize, the detained comrades are still there. Our party is requesting a hearing with the leadership of the National Penitentiary Institute of Colombia (INPEC), to solve this situation and achieve better conditions not only for the comrades in the prison sector, but also to evaluate what measures should be taken in this situation of pandemic.
What is on the horizon for People’s Power after the pandemic?
MD:Let us hope that after the pandemic the world will not be the same again, not only because of the ravages that the system will leave on the poorest, but because of what is becoming evident to the impoverished and popular masses. We believe that a leap in consciousness can be made, where people have confirmed by this unprecedented experience, for whom the wealthy and the so-called entrepreneurs govern, we will have discovered after much pain, hopefully not so much, the value of solidarity, the importance of human rights that are not transformed into services, the impact of our actions on the life of the planet, the strength of action in the unity of millions. We do not believe that the economic and social system is changed by the coronavirus but by organized social forces and that this situation is going to allow a leap in consciousness.
Monica Delgado points out with great certainty that this global pandemic situation has exposed the interests defended by those who preside over governments around the world and this time it will not be easy to hide it.