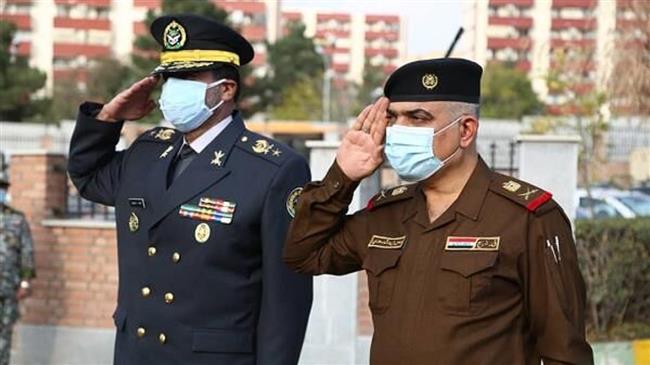 The Islamic Republic of Iran Air Defense Force (IRIADF) expresses readiness to start training the Iraqi Army’s servicemen as means of expanding military cooperation between the friendly and neighboring countries.

November 17, 2020.-  The force’s commander Brigadier General Ali-Reza Sabahi-Fard made the remarks, meeting with his visiting Iraqi counterpart in Tehran on Tuesday. The latter has traveled to the Islamic Republic as part of a military delegation led by the Arab country’s Defense Minister Lieutenant General Juma Anad Saadoun Khattab.

The Iraqi forces, Sabahi-Fard added, could start receiving training at Iran’s Khatam al-Anbiya Air Defense University in order for the Islamic Republic to be able to communicate its “military knowhow” to Baghdad.

The Iranian commander called the training process “the first step” that could be taken towards furthering the countries’ defensive interaction in light of the expansive defensive capacity that each has at its disposal.

“Through the countries’ cooperation, the region’s skies can be secured properly,” he said, noting cooperation with neighbors constituted one of the Islamic Republic’s strategies that were aimed at providing regional aerospace security.

The IRIADF was also prepared to equip and fortify Iraq’s air defense systems, Sabahi-Fard said. Tehran could start reinforcing Baghdad’s radar network and the countries’ could build an “integrated air defense network” together, he added.

For his part, the Iraqi commander, Major General Zaid Ibrahim welcomed enhancement of military cooperation between the two sides. Baghdad favored upping technical, intelligence, and operational collaboration with Tehran as a way of boosting the security of each country’s respective airspace, he added.

The two identified operational, technical, overhaul and maintenance of manned and unmanned flight systems, and training as the areas, where the countries could further their joint efforts.

The top brass, meanwhile, addressed operational cooperation and synergy towards fighting Takfiri terrorism and other sources of threat to their respective countries’ sustainable security.

Iran was the first country to rush to Iraq’s assistance after the Takfiri terrorist group of Daesh’s rise in the Arab country in 2014, providing Baghdad with decisive advisory military support.

A coalition led by the United States, which is largely blamed for breeding the terrorist outfit, meanwhile, began to operate in Iraq under the guise of uprooting the terror group. The coalition, however, was surprisingly slow in confronting Daesh’s elements despite the sheer size of the alliance that was enlisting scores of Washington’s allies.

Baghdad has considered the Iranian assistance to have been truly instrumental in defeating Daesh, while the US-led forces were seen leveling entire areas in ways resembling a World War-era strategy under the pretext of battling the terrorists.

Earlier in the day, Chairman of the Chiefs of Staff of the Iranian Armed Forces, Major General Mohammad Baqeri told the Iraqi defense chief that defensive cooperation between the neighbors would improve security in the Arab country in the face of efforts by the White House to revive terrorists in the region.

The countries have prepared a document on defense cooperation, which will be signed in near future, Baqeri said, adding that Iran’s Defense Ministry had supplied Iraq with the equipment it needed under previous accords.