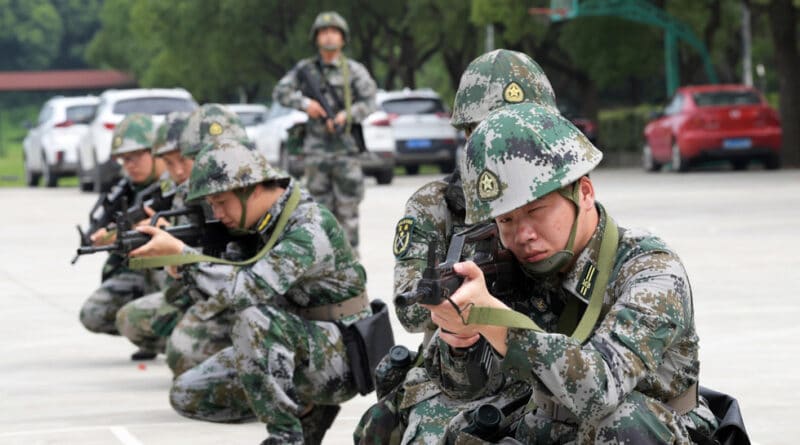 My social media notifications have been lighting up over the last few days, with virulent Chinagaters sharing a video which purports to show Uighur Muslims being loaded onto a train to be taken to concentration camps.

It’s actually an old video that had already surfaced last year, but it is magically making the rounds again as a new and shocking revelation in 2020, now that Western China hysteria has been officially kicked into high gear, at exactly the same time the US enacts one of the most dangerous and incendiary escalations of recent years in the South China Sea.

So this old video from #Xinjiang of inmates transfer from Kashgar to Korla is making rounds on social media again. It 1st surfaced in Sept, 2019 but appeared to be older video from 2018 based on image analysis. Thread: pic.twitter.com/qhY6jhVopp

Everyone tagging me in this video presents it as a self-evident “gotcha” moment, in exactly the same way Russiagaters spent years tagging me in every “HUGE BOMBSHELL WALLS ARE CLOSING IN” item of thinly sourced narrative fluff for their debunked conspiracy theory that the Kremlin had infiltrated the highest levels of the US government.

They are one hundred percent certain that the video shows Uighurs being loaded onto a train to go to a concentration camp, solely because that is what the bit of text over the video tells them they are seeing. They aren’t looking at the actual data and thinking critically about it, they’re looking at the narrative and believing it on blind faith. Which, in a post-Iraq invasion world, is an absolutely insane thing to do when presented with information about a nation that is being targeted by the US-centralized empire.

In reality there’s nothing in the video which tells us that these are Uighur people being sent to a “re-education camp,” and not merely a conventional prison transfer of convicted criminals, the likes of which take place in the far more populous US prison system all the time. It’s an unknown. We are told by the BBC’s Andrew Marr (the same Andrew Marr whose phony journalism Noam Chomsky derided years ago) that it has been “authenticated by Western intelligence agencies and by Australian experts”, which in practice are the same thing, and that’s really the extent of the evidence. Again, this is an insane source to take on faith in a post-Iraq invasion world.

There are in fact an abundance of reasons to be highly skeptical of the establishment narrative about what is happening to Uighurs in Xinjiang. But that isn’t the point that I am trying to make here.

This thread is a reproduction for posterity of a good thread by @OohTheChilliOil, an account deleted by Twitter for unknown reasons, on the "Uighur Genocide". The only archives I've been able to find of this thread are damn near unreadable, so I'm piecing it back together here: pic.twitter.com/4ET5fjnjz9

The point I am trying to make here is that the only sane response to any narrative that is being promoted by Western intelligence agencies and their media stenographers about governments which have resisted absorption into the imperial blob is intense and unrelenting skepticism. These organizations have such an extensive and well-known history of lying about exactly this sort of thing that they have left us no choice but to withhold belief from anything they say, without a mountain of independently verifiable evidence, if we want to have a fact-based relationship with reality.

RELATED CONTENT: As Congress Blocks Defunding the Pentagon, Here Are Ten Things We Could Have Spent the Money On

None of this means that China has a wonderful government. It doesn’t even mean that all the bad things we’re being told about what the Chinese government is doing are false. It’s entirely possible that that video shows exactly what we’re being urgently told to believe it shows. There’s simply no way to be sure, one way or the other, in an information ecosystem that is so severely tainted by propagandistic narrative manipulation.

Surely the Chinese government is far from sinless. It seems to be a constant that power structures which keep secrets and use propaganda will always wind up doing ugly things. But this doesn’t mean you go believing whatever cold war-facilitating story we are fed about it by Western power structures. Not if we want to avoid being duped into serving as pro bono CIA propagandists, unwitting tools of a murderous war machine.

There is a slow-motion third world war underway between the US-centralized power alliance and the nations like China which have resisted being absorbed into it, and that war is being largely facilitated by propaganda. If one doesn’t wish to become a propagandist themselves, one ought to withhold belief from the stories they are told about the terrible, awful things the unabsorbed nations are doing which require extensive sanctions, subversion and interventionism in response.

This doesn’t mean you believe the opposite of what you’re told; it simply means you refrain from believing either way and remain agnostic until presented with hard, verifiable proof. Believing damaging narratives about US-targeted governments is exactly as stupid as believing the words of a known compulsive liar about someone you know he hates.

China is such a curious anomaly in the narrative matrix. Many who are normally skeptical of claims by western governments immediately swallow anything they’re told about China. They not only believe all such claims, it never even occurs to them to seriously question them. It’s like they’re genuinely unaware that skepticism of establishment China narratives is even an option. The claims just slide right into the “believe” file in their mind, completely unchecked by anything resembling critical thought.

I argue with people all over the political spectrum about China online, and an astonishing percentage of them have clearly put exactly zero research into critically examining these claims, even if they’re people who are normally relatively critical of Western foreign policy. They’re often completely unaware that whatever claims they’re advancing are not just disputed, but have large amounts of evidence against them. This is because they’ve done no research whatsoever into finding out if what they were told is even true. They’ll do that research on Iran, they’ll do it about Russia, they’ll do it about Syria, but with China all skepticism immediately goes right out the window. It’s the weirdest thing.

Always be intensely skeptical of claims made about governments targeted by the known liars who run the US-centralized empire. Always, always, always, always. If you advance imperialist propaganda, then you are just as culpable for the bloodshed and suffering they help facilitate as the people who are actually launching the missiles.