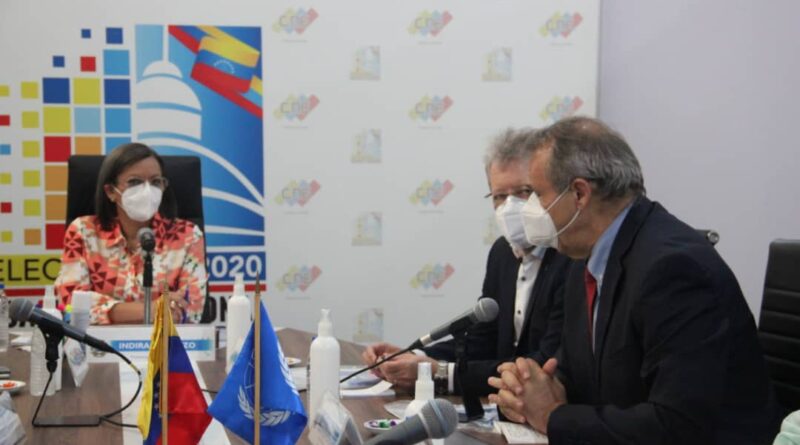 The President of Venezuela’s National Electoral Council (CNE) Indira Alfonso, in the company of the Minister of Foreign Affairs, Jorge Arreaza, held a working meeting with United Nations representatives in Venezuela. UN representatives were familiarized with the high-tech equipment that makes up the electoral platform. They also learned first-hand about the biosafety protocols to be applied in the 14,221 voting centers deployed for the upcoming parliamentary elections, scheduled for December 6.

The working meeting was led by Indira Alfonzo, Vice President of CNE Leonardo Morales, and the Rector Tania D’Amelio. They received the Minister of Foreign Affairs, Jorge Arreaza Montserrat; Dr. Marisela Bermúdez, Vice Minister of Collective Health Networks of the Ministry of Health; His Excellency Mr. Peter Grohmann, Resident Coordinator and Humanitarian Coordinator of the United Nations System; and His Excellency Mr. Pier Paolo Balladelli, Representative of the Pan American Health Organization and World Health Organization in the Bolivarian Republic of Venezuela.

@CancilleriaVE’s Twitter account stated that “President of @ve_cne Indira Alfonso, accompanied by representatives of the United Nations Organization in Venezuela and Foreign Minister Jorge Arreaza, toured the electoral turnstile to learn about the biosafety protocols that will be applied for the upcoming 6D.”

On several occasions, President Maduro has publicly invited international organizations such as the European Union and the UN to accompany the process, and to be guarantors of the transparency of the electoral process in the country.

To end the meeting, a tour of the Electoral Museum Exhibition located in the CNE facilities was made, which dispalys the evolution of our Automated Voting System to the new voting machine that will be used for the upcoming electoral process.

It should be noted that this Tuesday the National Electoral Council (CNE) announced the start of the deployment of non-codified electoral material for the parliamentary elections.