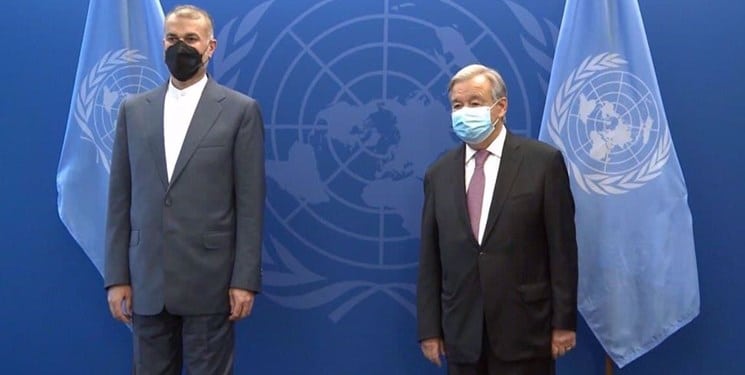 “The US uses sanctions against nations. The US uses terrorism against other nations for its own political goals—most notably the cowardly assassination of General Qassem Soleimani,” Amir Abdollahian said during a meeting with UN Secretary-General Antonio Guterres in New York on Thursday.

Amir Abdollahian underlined that a unified voice from the UN against such imperious conduct is necessary.

“Of course, Iran is pursuing [the case] nationally and internationally to bring to justice the perpetrators of the assassination of General Soleimani and his companions,” he added.

Amir Abdollahian said the need for the UN to play a serious and constructive role in the region is felt more than ever, particularly in Palestine, Syria, Yemen and Afghanistan.

In a relevant development earlier on Thursday, Amir Abdollahian in a meeting with UN General Assembly President Abdulla Shahid in New York underlined that the assassination of anti-terror commander Lieutenant General Qassem Soleimani is a blatant example of the US state terrorism, and called for international efforts to bring to a halt Washington’s criminal acts throughout the world.

“The assassination of Martyr General Soleimani, the great General of Peace, by the United States on the Iraqi soil, was one of the most obvious instances of terrorism,” Amir Abdollahian said during a face-to-face meeting with Shahidin in New York on Thursday.

Amir Abdollahian has travelled to the US to attend the UN General Assembly’s 76th Session in New York City.

Recalling the US assassination of General Soleimani, the Iranian foreign minister said that an international legal committee has been formed inside the Islamic Republic to pursue the atrocity, with the aim of consigning those who perpetrated and ordered it to justice.

“The United Nations, however, definitely played an important role in this regard too,” Amir Abdollahian said.

He called terrorism a phenomenon that has come to afflict the entire world, and said that Iran is playing constructive role in cooperating with the regional countries, from Lebanon to Iraq and Afghanistan, in fighting it.

The Iranian foreign minister referred to the other forms of American terrorism that has been targeting Iran, and said that the economic terrorism that Washington has been waging against the Iranian nation through its oppressive sanctions is another type of US state terrorism.

Amir Abdollahian pointed out how the US has been tying the economic terrorism to health and pharmaceutical terrorism too and its prevention of exports of direly-needed medicines to Iran.

The top Iranian diplomat, therefore, urged the international community to serve the US’s approach with a serious response.

“The General Assembly was expected to stand up to the US’s unilateralism and lawlessness by reinforcing multilateralism,” he added.

Amir Abdollahian, meantime, congratulated Shahid on the occasion of his appointment as the Assembly’s president, and invited him to travel to Tehran.

Shahid, for his part, likewise congratulated Amir Abdollahian for his assumption of the role of Iran’s foreign minister.

He recalled about a trip he had made to the Iranian capital in 1996 to take part in the Organization of Islamic Cooperation conference in his capacity as a Maldivian official, calling his stay a memorable one.

Shahid described a multilateral system as the international community’s only choice and way forward.

General Qassem Soleimani and Mahdi al-Muhandis, the two iconic figures in the fight against the ISIL terrorist group, were killed in a US airstrike outside the Baghdad International Airport on January 3, 2020.

Days after the brazen act, the IRGC launched a volley of missiles at a major military base housing American forces in Iraq.

Iranian officials have on several occasions vowed to avenge the death of the two top commanders, as well as the killing of its top nuclear scientist Mohsen Fakhrizadeh.

Iran has denounced the assassinations as “state terrorism” and vowed to end the American presence in the region as the ultimate act of revenge, while urging neighboring Iraq to expel the US forces from the country.

Featured image:  TEHRAN (FNA)- Iranian Foreign Minister Hossein Amir Abdollahian called on the United Nations to unanimously stand up against the United States’ use of terrorism against different nations for political gains.