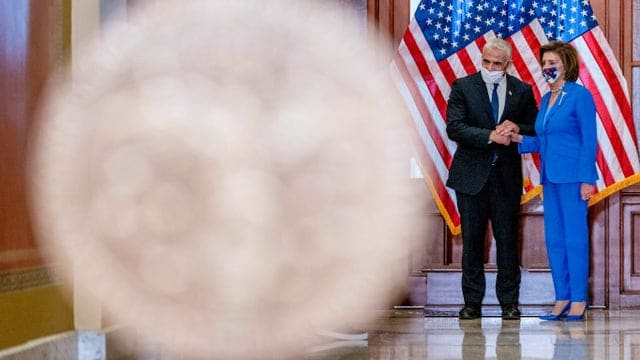 Last month, the Israeli cabinet approved 100 million shekels (about $30 million) in funding to boost government propaganda in Western countries. Under Foreign Minister Yair Lapid, the funding will restore a government initiative to combat the Palestinian-led Boycott, Divestment and Sanctions (BDS) movement and shift public discourse on Israel in the state’s favor.

The plan is to revive a government project initially called “Solomon’s Sling” and now renamed “Concert.”  Set up in 2015 by the defunct Ministry of Strategic Affairs, which closed in 2021, Solomon’s Sling was provided with an $80 million budget. Half of the funding would come from the government and the other half would rely on individual and organizational donations, mostly from the United States.

U.S. law dictates those donating to governments must register as foreign agents. Solomon’s Sling was listed as a Public Benefit Corporation (PBC) run by government officials in an attempt to maintain appearances. “The understanding was that it would be easier for them to appear as a PBC than as something that the Israeli government is behind,” Ronen Menalis, the former director of the Strategic Affairs Ministry, said during a parliamentary debate. “In the end, you see a bank transfer from a PBC and not a bank transfer from the Israeli government.”

Yet few were willing to register as foreign agents, thereby limiting Solomon’s Sling’s fundraising. The project was able to raise only $7 million of the expected $40 million, so it never came to fruition.

The Ministry of Foreign Affairs did not respond to MintPress News’ request for comment on the campaign’s objectives or its strategy to turn foreign organizations into propaganda agents for the Israeli government.

The new project is expected to last until the end of 2025. According to the campaign’s government proposal, each year Concert will receive a budget of 25 million shekels ($8 million) conditioned upon its being able to raise the same amount privately.

Targeting BDS
The Sydney Festival – a three-week-long arts event in Australia, funded by the Israeli embassy – became a significant BDS victory after more than 100 artists and companies dropped out in solidarity with Palestine.

Dr. Shir Hever, a political economist and author, described how Israelis often see the face of the BDS movement as concert cancellations – likely the reason the relaunched campaign is called Concert.  “A lot of Israelis are thinking, ‘How do you fight a movement that sends protest letters to artists?’” he said, noting that the trend of concert cancellations has declined recently. “It’s become clear that Israel is subsidizing these concerts to put pressure on the artists not to cancel,” Hever told MintPress News.

Hever explained that how the propaganda initiative will differ from its first iteration remains a secret, given the lack of transparency within Israeli civil society, but this name change may hint at how the relaunch will operate.

Nasim Ahmed, commentator and writer for Middle East Monitor, pointed to these apartheid reports and changing opinions on Israel within the Jewish community as the reasons behind the cabinet’s decision to funnel money into government propaganda. “There’s a growing fear and anticipation that the campaign to what Israelis call ‘delegitimize’ Israel is going to be turbocharged in 2022. And they want to have something to push back against that,” Ahmed told MintPress News.

Recent governmental discussions seem to corroborate this theory. A leaked cable from Israel’s Foreign Ministry suggested Concert aims to combat a United Nations report expected to be released in June calling Israel an apartheid state. And during the Israeli cabinet meeting, Prime Minister Naftali Bennett used antisemitism as the prime motivator for anti-BDS funding. “Contemporary antisemitism comes in many guises. Today, this energy of Jew-hatred is frequently directed at the state of the Jews. Our obligation as the State of Israel is to expose it, even when it is disguised, and fight it,” Bennett said, when announcing the additional funding.

While the most apparent reason to renew Solomon’s Sling under a new banner is to fight BDS, Hever suggested something more covert is at play, explaining:

There’s a small but growing class of right-wing activists with influence over politics and especially influence over the right wing. I think they have access to the government, to Yair Lapid, for example. And they tell him, ‘If you give us jobs, if you give us this project, we’re going to support you. But if you don’t, we’re going to stick with the opposition, the Likud Party, and maybe support the return of Netanyahu.’”

Hever detailed how organizations like non-profit NGO Monitor and settler association the Ir David Foundation have strong ties to the government, and by supporting politicians are able to secure funding for their Zionist projects — and their salaries.

The industry of hasbara
In Hebrew, hasbara means explanation, but in the context of the Israeli government, this term translates to public diplomacy efforts meant to defend or justify Israel’s actions to the global community. It’s Israel’s way of controlling the public narrative.

Concert is just one of several hasbara initiatives. These propaganda efforts go beyond the Israeli government and encompass civil society organizations like Committee for Accuracy in Middle East Reporting in America (CAMERA), StandWithUs, American Israel Affairs Public Action Committee (AIPAC), Anti-Defamation League (ADL), and Christians United for Israel. The government even encourages its own citizens to act as hasbara ambassadors when traveling abroad, by talking about Israel positively to their international peers. It also promotes hasbara training for diaspora Jews through programs like Hasbara Fellowships, an organization bringing students to Israel to teach them how to be effective at spreading Israeli propaganda on their college campuses.

And hasbara has specifically utilized digital media to get its message out. Retired American diplomat Chas W. Freeman Jr. explained how Israel has successfully turned the internet into a tool of deception during his remarks at the 2012 Jubilee Conference of the Council on Foreign and Defense Policy:

The state of Israel has organized civilian government and military units to exploit this [digital media], including creating websites, social media accounts, and messages attributed to false identities. It has learned how to manipulate browser functions, search engine algorithms, and other automated mechanisms that control what information is presented to Internet users.”

Searching for "Amnesty International" on Google?

Some users are finding this sponsored ad result, which takes you to a webpage for Israel's Ministry of Strategic Affairs. 🧐@amnesty pic.twitter.com/j40n8CACbt

World waking up to occupation
Both Hever and Ahmed stated that despite Israel’s various hasbara efforts, it isn’t winning the information war.

“The fact that they’re having to launch and then relaunch and pump more money into Concert shows that it is not succeeding,” Ahmed said. Hever illustratedhow Israeli diplomacy has crumbled and its quick-fix solution to its foreign relations problem is negotiating arms and cyber deals with countries like India, Brazil, and the United Arab Emirates.

But this focus on those in power instead of the people may backfire. “They’re getting something from Israel and they’re giving something back, but it doesn’t change public opinion in these countries,” Hever said. “And as soon as the government changes and a new generation of politicians come into power, they are not going to consider Israel to be a friendly country.

From his perspective, Israel understands that the global public is becoming more aware of the state’s violence and corruption and less willing to tolerate it. Yet that doesn’t mean they’ll change their policies. “The Israeli government knows that they cannot change the way that the world considers Israeli crimes without actually stopping the crimes,” Hever said.

While Israel has been able to manipulate social media, Ahmed argues information online can’t always be controlled. “More and more people are realizing that this is not simply a land dispute, as Israel would like to say, but really there’s an entrenched system of occupation, ethnic cleansing, and apartheid that’s been taking place,” he said. According to Ahmed, even past Israel supporters are finding it more difficult to defend the state from a moral standpoint. “More and more people know the truth about Israeli occupation and that’s the real reason why the hasbara industry is failing,” he concluded.

Featured image: With a seal on a podium in the foreground, House Speaker Nancy Pelosi of Calif., meets with Israel Foreign Minister Yair Lapid on Capitol Hill in Washington, Oct. 12, 2021. Andrew Harnik | AP