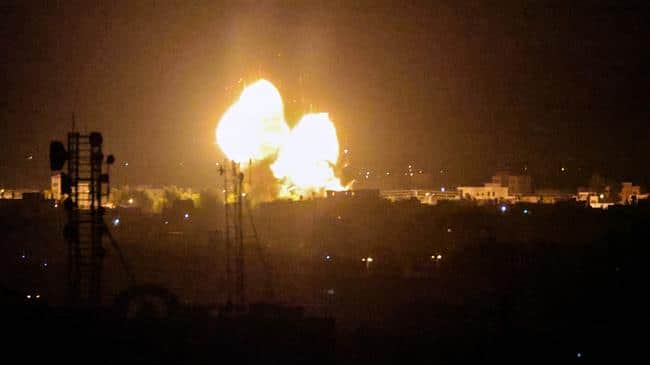 The Palestinian Islamic Resistance Movement, Hamas, has denounced the latest round of Israeli airstrikes against targets across the Gaza Strip, saying the Tel Aviv regime continues its aggressions against the besieged enclave to cover up its fiasco in the wake of the recent escape of six Palestinian prisoners from a high-security jail in the northern part of the occupied territories.

“Through bombing of Gaza, the occupying Israeli regime is making attempts to cover up its weakness and failure following Operation Freedom Tunnel, or its inability to stop the freedom struggle,” Hamas spokesman Hazem Qassem said in a post published on his Twitter page on Monday.

He added, “The response of the resistance [front] in Gaza to the Israeli bombing and engagements with occupation forces across West Bank cities and al-Quds validate the continuation of the freedom struggle of heroic [Palestinian] prisoners and the inability of the occupying regime to impose equations against Palestine and the resistance.”

Israeli military aircraft launched a series of aerial attacks on the besieged Gaza Strip in the predawn hours of Monday, with no reports of casualties.

The report added that a site belonging to Gaza-based resistance fighters was also targeted in al-Yarmouk area, which lies east of Khan Yunis city in the southern Gaza Strip, with multiple air-to-surface missiles.

The Israeli army said in a statement that it hit four bases, including an underground tunnel and weapons storage and production facilities, during the airstrikes.

The military added that it carried out the raids after Palestinians in the Gaza Strip fired a rocket toward Israeli-occupied land late on Sunday night.

During the Israeli attacks, resistance fighters in the Strip launched the second rocket toward southern part of the  occupied territories.

In the predawn hours of September 6, Zakaria Zubeidi, a former commander of the al-Aqsa Martyrs’ Brigade in Jenin and five Islamic Jihad members tunneled their way out through their cell’s drainage system and escaped from Gilboa prison.

Israeli prison officials were alerted by farmers who noticed them running through fields.

Four of the Islamic Jihad members were serving life sentences, while the fifth had been held without charge for two years under a so-called administrative detention order, according to Israeli media.

On Saturday, Israeli media outlets reported that four of the escapees had been arrested in the northern part of the occupied territories.

Featured image: A fireball rises following an Israeli airstrike in Rafah border town in the southern Gaza Strip, in the predawn hours of September 13, 2021. (Photo by AFP)