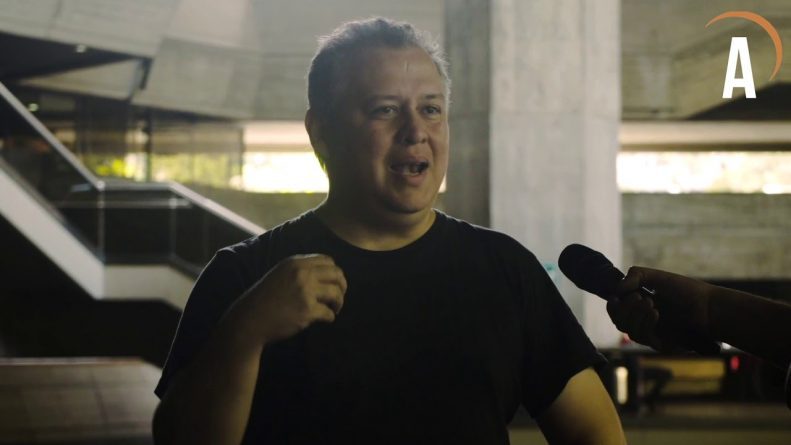 Reinaldo Iturriza, former Minister of Communes was interviewed last February the 14th in the Caracas’s Teresa Carreno Complex, by Pablo Navarrete. Bellow you will watch and read his answer to Navarrete’s question:

Do you think there are groups in the international left not well informed about what is happening in Venezuela?

There are people from the left who go around the world and they say they are revolutionary and very progressive, very radical. I just read one thing that says neither Guaidó, nor imperialism, nor the Venezuelan government because it is not socialist. These positions, let’s say as of principle, are absolutely, with all due respect, they are very disrespectful of the struggle that the Venezuelan people are giving here in Venezuela today.

They come and tell us, we that are fighting every day here, what the deficits of our government are and why we have to step aside and let the United States crush us because there are corrupt people or there are authoritarian people within the Bolivarian government, that is a lack of respect. It is an absolute lack of respect. In a very irresponsible way, in addition to pretending to separate themselves from the issue, favor movements, tactical moves, and even the interests of the US government.

In other words, the problem with Venezuela is that imperialism is not something that one grabs and makes an excuse for, as it is always said, in 1984 to grab the external enemy. No, the enemy really exists. And that enemy produces daily damage. That’s what my daughters are suffering, my family, my friends. People who are not anti-chavista but also do not agree, who are not Chavista, sorry. My friends and family, these people that I do not know, most Venezuelan society, being chavista or not, suffer this. And in a circumstance like this, try to mark distance, try to put yourself in a third position that does not exist in Venezuela, we either are a sovereign country or we are not a sovereign country. That there are problems with the Government of Nicolás Maduro no one knows it better than the Chavista people. No one knows it better than the Venezuelan people, but it is the Venezuelan people who have the right to say how the problems are going to be resolved here and it is the Chavista people who support this government the one who has the right to say what is going to be done and what is not going to be done with this government.