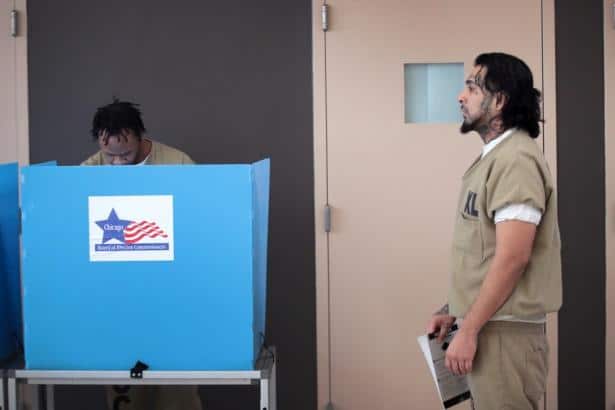 Unlike many people incarcerated in state and federal prisons legally ineligible to vote, moat in local jails — detained pretrial or held on misdemeanor charges — are legally eligible to vote, but are unable to do so,

A new report released by the Prison Policy Initiative outlines a different kind of voter suppression than has typically made headlines this election season: the de facto disenfranchisement of people incarcerated in local jails. According to PPI, an overwhelming majority of the 746,000 people detained in U.S. jails at any given day are legally eligible to vote but are often barred from casting their ballots due to structural obstacles and misinformation.

As opposed to the felony disenfranchisement that renders many people incarcerated in state and federal prisons legally ineligible to vote, those in local jails have largely retained their right to vote because a majority of them—nearly 75%—are being detained pretrial and thus have not been convicted of any charges. Further, people in jail who have been convicted are typically only serving sentences on misdemeanor charges. In all but seven states, these low-level offenses do not pose a barrier to one’s voting eligibility.

While conversations about disenfranchisement often reach the national stage every four years when the country is engaged in the presidential election, it is local races that will perhaps be most impacted by people in jail gaining full and easier access to the voting process. This is particularly true in places like Los Angeles, California, or Cook County, Illinois, where the daily populations of their local jails hover around 20,000 and 10,000, respectively. In key races such as those for district attorney, sheriffs, or city council members, better in-jail voting processes could help swing the results.

RELATED CONTENT: Behind US Elections: Disinformation, Racism, and Conspiracy Theories

Although people detained in local jails mostly retain their right to vote, actually casting their ballots and having those votes counted is not easy. For many—particularly first time voters or young people—just registering to vote inside can be a challenge. For instance, some states have strict laws requiring registrants to present an ID—an item that is typically confiscated upon arrest. Further, restricted access to the internet can prevent people from accessing online forms that are needed for registration. Even if people can access and complete the forms, jail paper mail systems are notoriously slow, meaning registration offices may not receive the forms by the necessary deadlines. Those concerns have been amplified this year as USPS delays have slowed delivery speeds for all mail, including registration forms and absentee ballots.

For those inside who are able to successfully register or who were previously registered prior to their arrest, casting their ballots is yet another hurdle. In many of the states that require voters to supply an excuse for requesting an absentee ballot, detention in jail is not on the narrow list of acceptable justifications. Additionally, jail staff can open and review jail mail, meaning that even those who are able to cast absentee ballots may have the secrecy of their vote compromised. This is particularly important in smaller local elections, especially sheriff’s races since sheriffs themselves manage the local jails where these voters are detained.

Perhaps the biggest obstacle of all, however, is ensuring that people in jail understand that they still have the right to vote despite their incarceration. Misinformation about whether they have lost their right to vote keeps many from trying to vote in the first place, and voters must also contend with a lack of information about how to register, how to mail in absentee ballots, and what candidates are on the ballot that might advocate for their needs.

Local volunteers have often stepped in to fill in the gaps, but this year, safety precautions related to COVID-19 have barred volunteers from visiting jails in some areas and assisting potential voters on-site. Middleton Jail in Essex County, Massachusetts, for instance, is experiencing a COVID-19 outbreak which has caused the facility to no longer allow volunteers to access the jail.

That particular barrier underscores how “undemocratic it is to have a system that relies upon volunteers,” said Kristina Mensik, assistant director at Common Cause Massachusetts. Mensik, along with elly kalfus, an organizer with Emancipation Initiative, is co-leader of the Election Protection Behind Bars Coalition. The coalition, which formed just this summer, works to push elected officials to establish guidelines for voting inside jails and coordinates with local sheriffs to implement ballot access programs. In Massachusetts, where Mensik and kalfus work, anywhere between 8,000 and 10,000 incarcerated individuals retain their right to vote but experience de facto disenfranchisement.

Mensik and kalfus note that because there is no statewide system across Massachusetts’ 14 counties for helping incarcerated people vote, there is a large degree of misinformation and a lack of access to basic voting materials like candidate voter guides or information on how to secure absentee ballots. Although volunteers have stepped in to help, the coalition is pushing for sheriffs and legislators to develop systems that can ensure safe and easy access to the ballot for incarcerated people. The group has based its strategy and its goals around a 2019 report released by Ballots Over Bars, a team within the Emancipation Initiative that spoke with sheriffs throughout the 2018 election and gathered information on what barriers were keeping incarcerated people from voting.

The coalition’s work now seeks to “shift the burden onto sheriffs and not individual people for providing ballot materials,” said Mensik. The coalition is also advocating on the municipal level for elected officials to better understand that a sizable portion of the incarcerated population is eligible to vote. This lack of understanding among election clerks, for example, has resulted in rejected absentee ballots.

“A lot of people don’t know there are two categories: incarcerated people that can vote and those that cannot,” said kalfus.

As GOTV initiatives have stressed, registering and casting your ballot is particularly important this year as the country grapples with sustained uprisings against police violence along with a deadly pandemic that in many states shows no signs of slowing down. In this moment, when an incredibly important and increasingly complicated election is colliding with a nationwide call for defunding and even abolishing policing and prisons, organizers with Election Protection Behind Bars are hopeful that more people will join the conversation and recognize the relationship between democracy and incarceration.

There have even been recent movements towards change. On Oct. 6, William Galvin, secretary of the Commonwealth, responded to a letter sent by the coalition and other Massachusetts based advocacy groups that asked the secretary to “systematize and secure access to the ballot for those who maintain their right to vote while held in state custody.”

Galvin sent out an advisory which provides information about which incarcerated people are eligible to vote, where their residency is, and how to go about registering. He also clarified for election officials that incarcerated voters are specially qualified for absentee ballots. kalfus says this is the first time the secretary of the Commonwealth has spoken directly to incarcerated voters in 20 years.

For people interested in getting involved as the November election quickly approaches, Election Protection Behind Bars says that writing letters to the editor urging legislators to address this problem and provide resources for in-jail voters is an incredibly important step. Just educating oneself about how this generally underserved population is yet again stripped of their rights and making their experiences visible by telling friends, family and colleagues is also, as always, key to inching towards change.