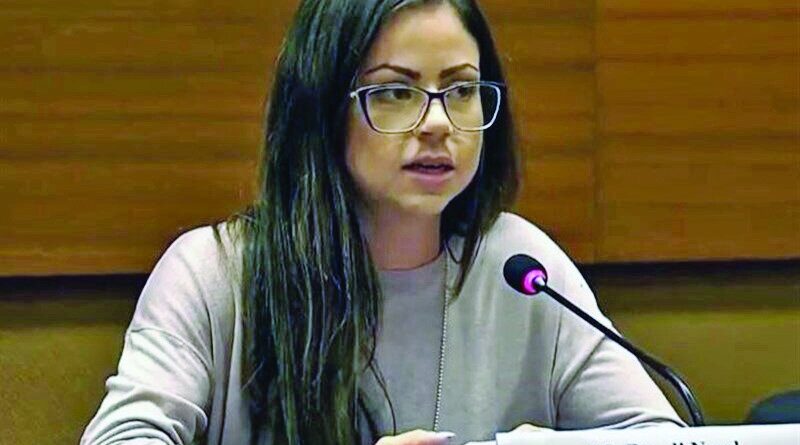 TEHRAN – Randi Nord, an American geopolitical analyst and content strategist, says elections in the U.S. are “all theatrics” and voters don’t have a real choice.

American voters only have the illusion of choice: geopolitical analyst

TEHRAN – Randi Nord, an American geopolitical analyst and content strategist, says elections in the U.S. are “all theatrics” and voters don’t have a real choice.

“Our elections themselves are all theatrics. Lobbying groups with massive spending power propel politicians into office to make decisions and write laws on their behalf,” Nord tells the Tehran Times.

“Corporations and wealthy groups have the power to control who makes it into office,” noted Nord, who is owner and editor of Geopolitics Alert.

She adds, “People in the United States are fed up with the bogus electoral process. Most people who actually vote admittedly don’t like the candidates and know it’s a sham. Some feel like it’s still their duty to vote as countrymen. Others are duped into believing they’re preventing a more evil candidate from assuming office.”

The following is the text of the interview:

Q: Can elections in the U.S. be considered democratic?

A: It’s hard to even call what we have in the United States “elections” and they’re certainly not democratic. The voting masses have little to say no in the matter nor are elected officials accountable to the needs and will of the people.

The officials “elected” to represent us have all attended elite universities, come from super-wealthy backgrounds, and were groomed to become career politicians since their teenage years. That’s why we have so many political dynasties in the United States like The Clintons and The Bushs.

“We’ve also seen MEK terrorists latch themselves to US politicians and provide financial support, such as John Bolton, to promote aggression against Iran.”

Our elections themselves are all theatrics. Lobbying groups with massive spending power propel politicians into office to make decisions and write laws on their behalf. On one hand, the ruling class certainly does have a democracy — but not for the people. Corporations and wealthy groups have the power to control who makes it into office. And the politicians in charge have everything the American people need but don’t have: $175,000 a year salary (over three-times more than the median household income), half of the year off with a month-long vacation, top-quality health insurance, and of course the usual perks from lobbying groups.

Many people outside the U.S. don’t realize that working Americans are generally very poor. Most Americans don’t have even $400 in savings to cover an emergency car repair. They live paycheck-to-paycheck and carry thousands in credit card debt to fill gaps. Millions of Americans, myself included, do not have health insurance and cannot afford to see a doctor.

People like Joe Biden and Donald Trump could never represent the people because they’re from a totally different world. Plus, there’s no money available in writing laws to benefit the people.

Q: How do money, power, and media affect the presidential election?

A: Corruption in the United States doesn’t happen behind closed doors. Plenty of legal channels exist to control our government with finances in broad daylight — as long as they complete the proper paperwork.

In the United States, we have massive lobbying groups for every topic you can imagine: pharmaceuticals, privatized health insurance, alcohol, technology, coal, etc. These organizations donate unfathomable amounts of money to both political parties. No matter which party is in charge, these super-wealthy elites ensure their interests are covered.

Q: What role does AIPAC play in U.S. elections?

A: As I mentioned, lobbying organizations play a heavy role in propelling politicians into office. One such organization is AIPAC (American Israel Public Affairs Committee) who spent over $22 million during the 2018 elections.

However, it’s worth mentioning that AIPAC itself isn’t the one donating to specific candidates. Instead, its individual members donate directly to campaigns and AIPAC partners with or forms other lobbying groups, such as J-Street, who do donate directly to politicians. AIPAC also sponsors politicians in other ways that don’t involve direct campaign donations.

In fact, we have a huge lobbying sector strictly for foreign organizations. Israel, South Korea, and the Arab Kingdoms are some of the largest foreign donors to both presidential candidates and rank and file politicians.

AIPAC’s allies, and several others like them, target politicians to sponsor bills in Israel’s favor and smash anti-Zionist legislation. This is why the United States will always remain friendly with Saudi Arabia and the UAE as well. The heavy financial influence from Japan and South Korea plays a huge role in U.S. aggression towards the DPRK. We’ve also seen MEK terrorists latch themselves to U.S. politicians and provide financial support, such as John Bolton, to promote aggression against Iran. In an essence, these foreign lobbying groups hold almost as much power over U.S. politicians as tech companies like Amazon or the pharmaceutical industry.

A: Our electoral system is designed to create an illusion of choice, not represent the people. A third party, even a benign party that barely threatens the current establishment like the Libertarian Party, is still too much uncertainty for the ruling class to bear.

This is one reason most establishment Republicans and Democrats despise Trump so much. He’s an outsider and loose cannon. He pulls back the curtain on our sham electoral process. Prior to Trump, U.S. leaders had to be cunning and maintain a facade. Trump exposes that by putting Washington’s true chauvinism and nefarious goals on full display.

Bernie Sanders’s campaigns also put the two-party system to the test, proving that we don’t have two parties but one neoliberal establishment.

Despite being the Democratic party’s most popular candidate in decades, the establishment Democrats slandered Sanders to no end and rigged the primaries against him twice. The changes Bernie Sanders represents are so mild in comparison to what the American people need. Even in the so-called “most important election of our lives,” the Democrats are willing to risk running unpopular Biden against populist Trump to avoid giving any ground to the ideas Bernie’s campaign represents. The Democrats would rather lose and remain an opposition party than represent the people and push for meaningful change. They’ll still have their cushy jobs, what do they care?

This just goes to show that any dissenting political force will be smashed by any means necessary. The ruling class is very united in this and, again, it’s why they despise the Trump and Bernie campaigns equally.

Q: Why is turnout so low in U.S. elections?

A: People in the United States are fed up with the bogus electoral process. Most people who actually vote admittedly don’t like the candidates and know it’s a sham. Some feel like it’s still their duty to vote as countrymen. Others are duped into believing they’re preventing a more evil candidate from assuming office. (That’s the Democrat’s strategy running Biden.)

Personally, I believe voting dignifies the electoral process and only encourages its false legitimacy. Only a tiny fraction of Americans are enthusiastic about the current state of our electoral process. These people are generally well-off financially and don’t have to worry about how politics affect their lives.

I’m expecting voter turnout to reach record lows during the 2020 presidential election. Biden will lose and the Democrats will blame Trump for restricting mail-in voting. Trump will blame the Democrats for instigating COVID fear and lockdown measures.