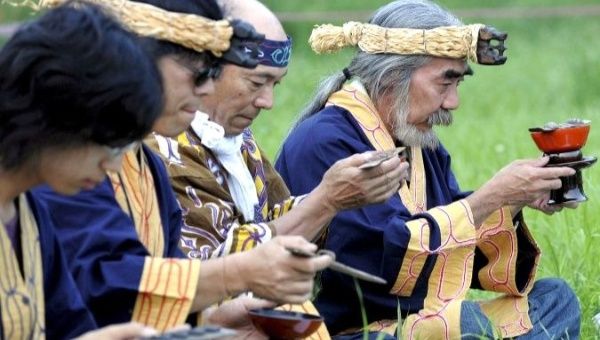 The new law will allow the Ainu to observe and maintain traditional practices such as collecting wood from national forests and catching fish in rivers, using time-honored, traditional methods.

The Japanese government approved legislation to legally recognize and preserve the cultural practices of the country’s Ainu Indigenous people at an Upper House plenary session Friday.

The legislation, according to Kyodo news agency, aims to preserve the culture of the Ainu people through state-backed financial assistance at central and local levels of government as well as promote the group’s culture and heritage.

The new law will allow the Ainu to observe and maintain traditional practices such as collecting wood from national forests and catching fish in rivers, using time-honored, traditional methods.

Head of the Ainu Association of Hokkaido, Tadashi Kato, pointed out that the new law did not cover ways to improve the living standards of the Ainu people.

According to a 2017 survey conducted by the government of Hokkaido, the percentage of Ainu advancing to universities stood at 33.3 percent, more than 10 points lower than the rest of the population in areas where Ainu live.

In March, Ainu activists launched protests, in Sapporo, Hokkaido, to highlight the inadequacy of the legislation regarding the representation of the Indigenous practices.

Several representatives of the Ainu Association, who were in attendance at Friday’s plenary session, expressed disappointment that the new law did not thoroughly address historical discrimination and criticized the legislation as being too similar to the old laws.

The new law falls short in not stipulating rights to self-determination and education for the Ainu despite those rights being acknowledged in the 2007 U.N. declaration on the rights of Indigenous people.

“I heard Indigenous peoples overseas realized various policies after they were stipulated in constitutions and laws. We will continue discussions toward the recovery of our rights,” Kazushi Abe, vice executive director of the Ainu Association of Hokkaido, explained.

The Ainu people struggled for centuries to maintain hunting and fishing cultural practices after Japan introduced an assimilationist law in 1889; an edict which forced the group into farming and the overall decline of centuries-old heritage.

The assimilationist law was eventually abolished in 1997 and replaced by legislation to protect the Ainu.

However, the latter did not explicitly acknowledge the Ainu people as an Indigenous people of Japan.

Further to preserving the Ainu people, the Japanese government announced the opening of a national Ainu museum and park in April 2020, in Shiraoi town in Hokkaido.

The Ainu have lived for centuries in northern Japan, notably in Hokkaido, as well as on neighboring Sakhalin (a Russian island).