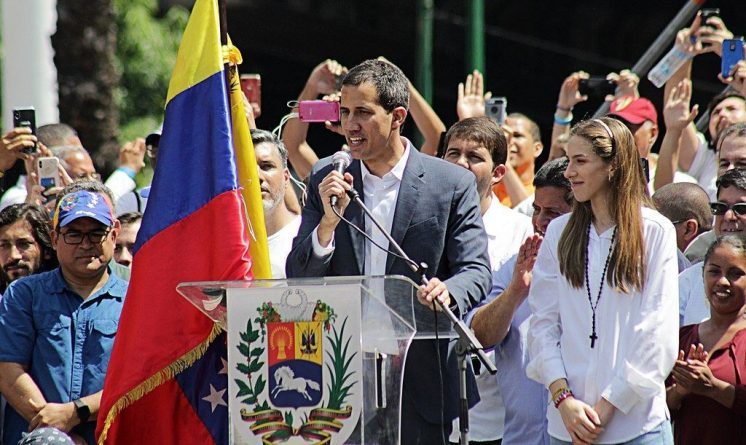 The silence is almost deafening. Is it the quiet before the storm? – Or is the US giving up on Venezuela? I don’t think so. It’s more like a regrouping after a first defeat, well, it’s a multiple defeat, if we start counting since the failed coup attempt against Hugo Chavez on 11 April 2002.

However, Washington is not giving up. The first blows come flying. Pompeo to Maduro – open your borders for humanitarian aid, or else…. which implies the usual, “all options are on the table – ’humanitarian’ military intervention is an option”.

Washington – April 10, 2019, high level US and South American (members of the infamous and nefarious Lima Group, naturally) politicians and military held a secret meeting about the strategic next steps to subdue Venezuela, how to “regime-change” the Maduro Government, by ‘military options’, as reported by investigative journalist Max Blumenthal. The meeting was dubbed ‘Assessing the Use of Military Force in Venezuela.’ It was hosted by the DC-based neoliberal think tank the Center for Strategic and International Studies.

Venezuela’s ambassador to the UN, Samuel Moncada, denounces Trump’s preparations for war to the entire UN community. The UN Community is increasingly taking note of the atrocities and lawlessness of the one rogue UN member that has the arrogance of thinking and acting as if it were above the law, above every law, even the laws made by its own lawmakers, the United States of America. In the context of the failed coup attempt on Venezuela, a group of about 60 UN members formed, including Russia, China, India, Pakistan, Iran and many more, representing about half of the world population, in support of Venezuela and especially in support of the UN Charter. The group requests and will enhance actions for UN members to respect the UN principles, the laws and rules upon which the United Nations were created almost 75 years ago. This is a new twist within the UN body.

On 11 April, US Treasury Secretary, Steven Mnuchin, met in Washington with 16 ministers of finance and representatives of 20 countries (Argentina, Brazil, Canada, Chile, Colombia, Costa Rica, Ecuador, France, Germany, Guatemala, Guyana, Italy, Japan, Mexico, Panama, Portugal, Peru, Spain, and the UK) – to enhance the support of some 50 countries of the self-declared president Juan Guaidó, and how to support Venezuela, once the Maduro Government “is gone”. – Hilarious, if it wasn’t so serious. It is as if these, otherwise smart people, were falling into the trap of Joseph Goebbels, Hitler’s Propaganda Minister – if a lie is repeated enough, it becomes the truth. Indeed, there is no other country in recent history that emulates Hitler and his approaches to world dominance by manipulation as well as Washington. And indeed, it is not quite clear, who was teaching whom.

Venezuela’s Vice-president, Delcy Rodriguez, denounces the preparation of military intervention in Venezuela by the US, Colombia and Brazil. She warns the world from a humanitarian disaster if the global community, allows the United States and its minions to interfere in Venezuela.

Mexico’s new President, Andrés Manuel López Obrador (AMLO), also vehemently rejects any interference in Venezuela – and offers his Government’s services to mediate a dialogue between the Maduro Government and the opposition, a dialogue to which President Maduro has invited the opposition already many times. To no avail. Mostly because the orders from Washington are clear, no dialogue – no compromise, the Maduro Government must go.

We will inject the necessary capital into the inefficient oil industry, and our petrol corporations are eager to revive Venezuela’s hydrocarbon industry and make it profitable again. These are the bold and honest words of John Bolton, US National security Adviser. Let’s see where all this hoopla may lead. If it sounds like wishful thinking, it is wishful thinking.

Even though the true media hero, Julian Assange is for totally illegal reasons behind bars in the UK. And this because laws are made in Washington as Washington sees fit, as Trump signs papers, shows them on TV and they becomes law – and laws of the US are applied throughout the US vassalic world, and especially by its poodle puppets in London. Never mind this minor detail of human derailment. More importantly, it seems that Mr. Assange’s spirit and that of his creation of truth-telling, Wikileaks, is increasingly reflected by politicians and journalists – who, though somehow coopted into the ‘system’, feel discomfort with this very system and decide to leak so-called classified information into the non-mainstream truth-telling media.

A classical case may be the secret ‘RoundTable’ that took place in Washington on 10 April to discuss the fate of Venezuela. The news about it was first published by the Grayzone portal on 13 April. Mr. Blumenthal has obtained the information along with a “check-in list” of the high-flying participants to this private ‘round-table’. When confronted and asked for interviews on the event, most members on the list were surprised, even stunned, and refused to talk. Somebody from inside must have leaked the information about the clandestine meeting.

On a totally different issue, but equally important for the concept and philosophy of leaking information to the outside world, is the recent disclosure – “leak” – by someone in the French military that sophisticated French weaponry was used by Saudi Arabia to attack and kill defenseless Yemenis. And this, although the French – and especially Roi Macron himself, has always denied that the French were participating offensively in this also illegal US-UK-NATO proxy war. The French narrative was and is that France’s weapons were only defensive. Sounds as stupid as calling the US War Ministry, the Ministry of Defense.

Are we entering a Leak-zone (no pun intended) – an epoch of leaking, of divulging ‘secret’ and classified information? Have we had enough impunity? It’s time to stop it. What is this “classified” and secret information anyway? In a so-called Democracy – why are the elected government officials privileged to hold on to secret information, unknown to the public who lives under the illusion that they elected them, and – more importantly, or even worse – the public, who pays for them. Can’t you see, dear People, what aberration of “democracy” we have moved into? – Please, just open your eyes and see all these contradictions, contradictions for us, but they serve the chosen- and you believe elected-by-you – elite, lining their pockets and increasing their power.

Now the public must know the truth. This new Leak-Culture may take hold. – If so, its high time, but never too late. It would be another sign towards the empire heaving on its last breath, or as Andrew Vltchek so adroitly puts it, when he describing the ultimate crime of the lawless London gang, the police manhandling a sick and defenseless Julian Assange, “By dragging him from the embassy into a police van, it [the empire] has admitted that it already has begun sewing its own funeral gown.”

Back to Venezuela. Has Washington given up? Most likely not. Although their first coup attempt has failed. The Venezuelan military did not defect. Despite Trump’s warning, even threats, they stood and still stand behind Nicolás Maduro. The humanitarian aid trucks at the border in Cúcuta did not cross into Venezuela. In fact, they were burned by the very opposition, hoping to make believe that Maduro’s troops put them on fire. No. They were indeed the opposition forces and their allies in Colombia. Ironically, the mayor of Cúcuta, after the humanitarian aid stayed stuck at the border, asked Colombian President Duque, whether he, the mayor, might distribute the aid among the poor people of Cúcuta, because this aid was more needed in Cúcuta than in Venezuela.

Second, Juan Guaidó was never able to mobilize the crowds as Washington expected. Guaidó, a US lackey in the first place, lacks any charisma. He does not appeal even to the majority of Venezuela’s opposition. So, he is a dead horse. Bad choice by Washington.

Third, a direct military intervention seems unlikely – at least at this point – as Russia quietly but with considerable force has made known her presence in the country. And so does China. Though China may not have sent military personnel, China’s position was and is: Don’t mess with Venezuela. China and Russia have both huge investments in Venezuela’s hydrocarbon industry.

In the meantime, Bolton and Pompeo have already accused, in addition to Venezuela, Cuba and Nicaragua as spreading ‘socialism’ in the region. That’s their crime. It’s now in the open – it’s not just the oil, it’s also ideology. They are going to be sanctioned. In Cuba invoking again the 1996 Helms–Burton Act, under which foreign companies are prohibited from doing business in Cuba, lest they are prevented from doing business in the US. In addition, the amount of money Cuban American’s may send home is again limited, after Obama lifted the restrictions. – And exile Cubans – mostly applying to those in Florida – may now sue Cuba in US courts for confiscated and nationalized land after the revolution. And that after 60 years. I wonder, what US courts have to meddle in Cuba. This latest US arrogance stinks to heaven.

Will the world smell it? – Is Washington at the end of the rope with Venezuela? – We’ll see. Not voluntarily; that’s for sure. But if leakers keep leaking, it’s a sign that even insiders have had it.