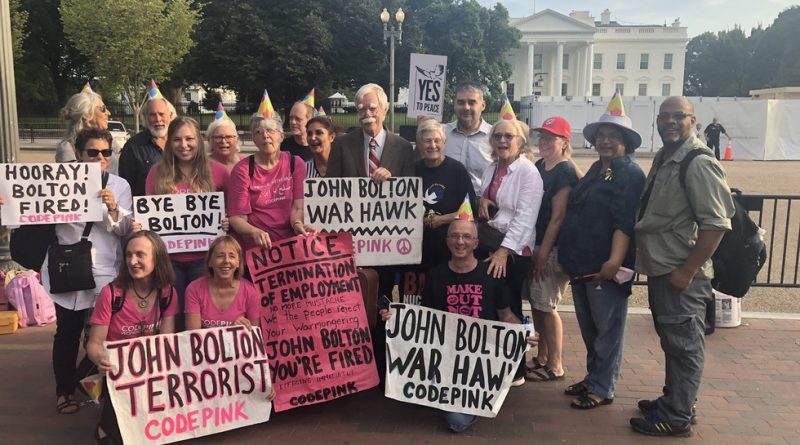 Within hours of his firing by President Donald Trump, the hawkish national security adviser John Bolton was embraced by mainstream media outlets and even some Democrats, even if only as an excuse to criticize the White House.
Trump announced Bolton’s ouster via Twitter on Tuesday morning, stunning even those in Washington who have reported on the possibility of such a move for months. As the shock wore off, however, reporters and lawmakers figured they would offer their thoughts – which, unsurprisingly, went along the usual lines.

“Can’t wait for the Resistance, led by Maddow & O’Donnell & Hayes, to embrace John Bolton as their hero,”quipped commentator George Szamuely. While the trio he named have so far been silent, their colleague “Morning Joe” Scarborough chimed in along those very lines.

John Bolton has been fiercely critical of Putin and North Korea for years. A quick Google search before his hiring would have revealed those stark differences. Bolton as Trump’s NSA never made sense because Bolton has never been cozy with those who count Americans as their enemy. https://t.co/aBjNwMbsO0

“John Bolton has been fiercely critical of [Russian President Vladimir] Putin and North Korea for years,” he tweeted, adding that it never made sense for Bolton to work for Trump, because he “has never been cozy with those who count Americans as their enemy.” Maggie Haberman of the New York Times and Oliver Darcy of CNN raced each other to present Bolton as someone who “felt uncomfortable defending” the administration on various issues, from tariffs to – of course – Russia.

Have similar reporting – West Wing officials said Bolton didn’t want to defend Trump on Russia being readmitted to G7. People close to Bolton insisted it was because he didn’t want to be the front person talking about tariffs, per multiple sources, which made little sense. https://t.co/qcop2GVK2F

Remember when super-patriotic cable geniuses told everyone that Trump chose Rex Tillerson as his Secretary of State because Putin ordered it, then said Trump fired Tillerson because he was anti-Russia? I do. This has been the state of US discourse for 3 years. It can’t get lower. pic.twitter.com/1ydiUFYTbb

To hear the senior Democrats on the Senate Foreign Relations Committee say it, Bolton was a valuable counterweight to Trump. Sen. Bob Menendez (D-New Jersey) argued that Trump only appreciated “yes-men” and that Bolton at least “presented counterviews at times.” He would not explain how Bolton stayed in his post for nearly 18 months. “Mr.

Bolton and I didn’t agree on a lot of issues. But he was a straight shooter. He knows the circumstances. I’m sure he told the president what was going on. The president may not have liked to hear it. And it’s unfortunate if the president won’t accept professional advice,” said Sen. Ben Cardin (D-Maryland). Senate Minority Leader Chuck Schumer (D-New York) used the opportunity to denounce Trump for “government-by-chaos approach and his rudderless national security policy,” alleging that Bolton’s “extreme views” weren’t enough for the president. House Speaker Nancy Pelosi took the same approach, saying Bolton’s sudden departure “is a symbol of the disarray that has unnerved our allies since day one of the Trump Administration.”

As the rest of the world breathes a sigh of relief that an unhinged warmonger is ousted from Trump’s cabinet, the Democratic leadership laments the “chaos” and “disarray” caused by more personnel changes. Arguably the lamest politicians in history. pic.twitter.com/ZXdDXKYwct

John Bolton’s sudden departure is a symbol of the disarray that has unnerved our allies since day one of the Trump Administration. Steady leadership & strategic foreign policy is key to ensuring America’s national security. https://t.co/MQIYet8pnA

Disagreeing with the party leadership once more, Rep. Ilhan Omar (D-Minnesota) called Bolton’s firing “good riddance,” describing him as “one of the leading proponents of making the world a more dangerous place.” Meanwhile, Senator Ted Cruz (R-Texas) praised Bolton as a friend who provided “wise counsel to multiple administrations,” and expressed hope that his departure does not mean Trump will not “go soft on Iran.”

I sincerely hope his leaving the White House does not mean that the deep-state forces at State and Treasury—who have been fighting tooth and nail to preserve the Obama Iran nuclear deal—have finally convinced the president to go soft on Iran.

That point was also made by Secretary of State Mike Pompeo, who told reporters at the White House on Tuesday afternoon that executive branch employees may come and go, but it’s Trump himself who sets policies.

Featured image: While these antiwar activists from CodePink did not appear saddened by Bolton’s exit, some in the US establishment have been wringing their hands. ©  Twitter/CodePink