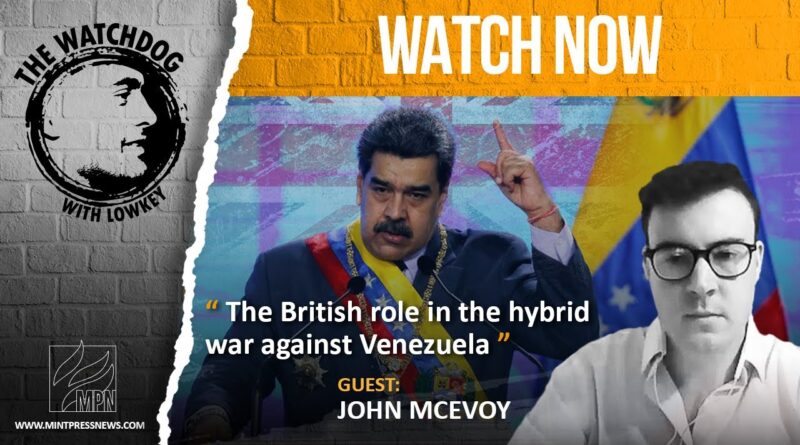 Lowkey and John McEvoy discuss how the United Kingdom is playing a key role in upholding the established world order and doing the dirty work to suppress any challenges to it.

The Watchdog podcast is dedicated to uncovering hidden truths and exposing the secret affairs of Western governments. One individual doing more than almost anyone in revealing the true nature of the British state and its affairs worldwide is journalist and academic John McEvoy. Today Lowkey and John discuss how the United Kingdom is playing a key role in upholding the established world order and doing the dirty work to suppress any challenges to it.

In Venezuela, Britain is dedicated to supporting the U.S.’s sanctions regime against the country, responsible for more than 100,000 deaths already. McEvoy’s work has revealed the existence of a secret British “reconstruction unit” inside Venezuela — an organization dedicated to overthrowing the Maduro government and planning for a future Venezuela without him.

The British government also ordered the Bank of England to freeze around $2 billion worth of gold belonging to the government of Venezuela, on the grounds that it no longer recognized Maduro, instead choosing the unelected Juan Guaidó as the country’s legitimate ruler. “Venezuela has been a key target of the hybrid war,” McEvoy explained to Lowkey.

McEvoy’s academic work at the University of Liverpool focuses on Western interference in Latin America. He recently revealed that the British government had worked tirelessly in the 1960s to prevent the anti-imperialist socialist Salvador Allende from coming to power, and, once he was overthrown in a U.S.-backed coup d’etat, supported fascist dictator Augusto Pinochet. The U.K. government protected Pinochet even after he was removed from office, including paying for his legal fees in his extradition case to Spain, where he was wanted to stand trial for crimes against humanity.

Just as Britain protected war criminals in the past, today it is helping to persecute those who expose war crimes, such as Julian Assange.

A major thorn in the side of the British establishment, McEvoy is having increasing trouble uncovering documents, his FOIA requests being constantly dismissed in cases he believes to be politically motivated. The FOIA system is supposed to be blind and neutral. However, he told Lowkey, “it has become clear that they have got a blacklist of journalists that they have effectively blocked releasing information to… It’s a signal of a receding democracy.”

The two also discuss threats to independent journalism at home, specifically the silent campaign to destroy the funding model of alternative media. A group called Stop Funding Fake News was set up in 2019, supposedly in an effort to pressure businesses to remove ads from websites sharing hateful or misleading content. However, McEvoy’s research found that the vast majority of its ire was directed at left-wing alternative news outlet The Canary, leading him to conclude that the project was a “thinly veiled censorship campaign against independent media in the U.K.” The project becomes even more cynical once we understand that the entire thing is linked to Keir Starmer and the right-wing of the Labour Party. This same grouping attempted to destroy the left-wing of the party, and, in particular, Jeremy Corbyn. Its attempts to throttle pro-Corbyn media appear to be merely an extension of this project.