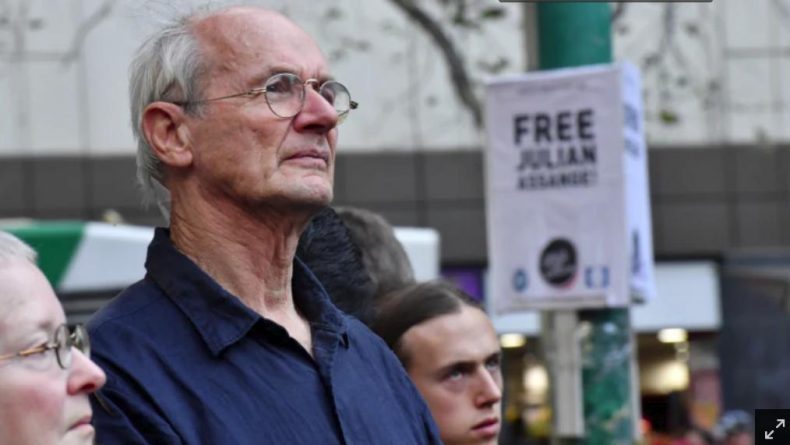 Julian Assange’s father has attended a Melbourne rally calling for the release of the WikiLeaks founder from custody after he was removed from the Ecuadorian embassy by London police.

John Shipton joined a crowd of about 100 people outside the State Library of Victoria from 4pm on Friday.

Mr Shipton applauded each of the speakers at the rally but was generally restrained.

He did not address the rally and declined to comment to The Age, on the advice of his lawyers.

Mr Shipton lives near Melbourne and was a foundation member of the WikiLeaks Party that attempted to have Assange elected to the Australian Senate in 2013.

He is believed to have regularly lobbied minor parties including the Greens calling for his son’s release, and spoke in defense of his son in December last year when he called for his “torment” to end.

Mr Assange was arrested at the Ecuadorian embassy in London on Thursday after the South American country revoked his asylum.

He was charged with skipping bail by entering the embassy in 2012 and later appeared in Westminster Magistrates’ Court, claiming he had a reasonable excuse for seeking asylum as his arrest would end in his extradition to the US.

Mr Shipton separated from Mr Assange’s mother, Christine Hawkins, prior to the WikiLeaks founder’s birth in Queensland in 1971.

He visited his son every Christmas during his seven-year stay at the west London embassy, and last year paid a visit alongside two German MPs calling for Assange’s freedom.

Graphic designer Somerset Bean, 49, said he has been living in England for four years and had visited Assange in the Ecuadorian embassy on several occasions, the most recent being 18 months ago.

“There should be thousands of people here. It’d be fantastic if there were,” said Mr Bean.

“If the governments and media hadn’t done such a hatchet job on Julian Assange’s character, then I’m sure there would be more people around.

“But still people have in their mind – sexual assault, narcissist, all of this stuff. I know the man, and it’s all absurd stuff. Absolutely absurd.”

Mr Bean said he was currently visiting friends and family in Australia, but would otherwise be in London protesting and attempting to visit Assange in prison.

“I was actually surprised at how shocked I was,” he said of witnessing Assange’s arrest.

“The footage was pretty graphic, and even though I’m someone who’s followed the case very closely, I was still shocked at that scene. I was also amazed at the blatant nature of the prosecution against him.

In his speech, writer and teacher Patrick O’Connor labelled legal proceedings against Assange “bogus” and a “conspiracy” that implicated Australia as an ally of the US.

Other speakers at Friday afternoon’s protest included Peter Byrne, a lower house candidate for the Socialist Equality Party at the federal election, who said Assange’s safe return to Australia would be a key policy for his party at the upcoming election.

To calls of “get him back here”, Mr Byrne demanded the Australian government offer the same support to Assange as it provided for Hakeem al-Araibi, who had sought asylum in Australia and was detained while travelling to Thailand, after Bahrain issued an Interpol red notice for his arrest.

Mr al-Araibi was released in March and has since become an Australian citizen.