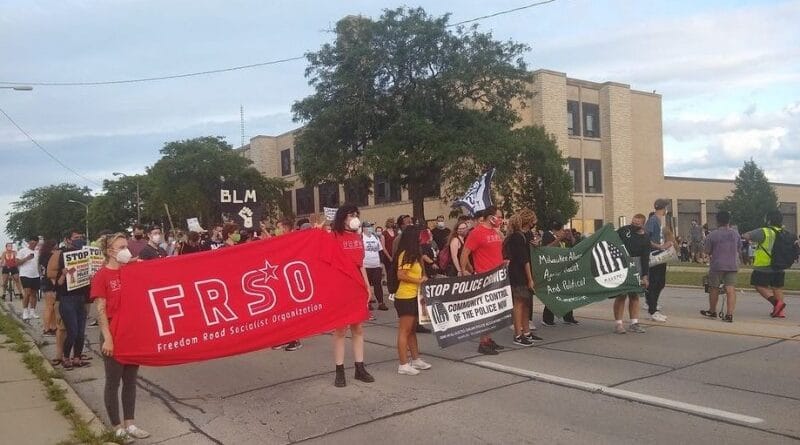 August 30, 2020.-  Kenosha, WI – On the evening of August 28, more than 200 people gathered outside the Kenosha Municipal Court building to demand justice for Jacob Blake and the victims of killer Kyle Rittenhouse. The rally was called for by the Milwaukee Alliance Against Racist and Political Repression, with support from UW-Parkside Students for a Democratic Society, Kenosha EquiTeens, Wisconsin Freedom Road Socialist Organization, and the Chicago Alliance. Many in the crowd held signs that read “Stop police crimes! Demand a civilian police accountability council!”

“I am tired. I am tired of seeing my people dying at the hands of unfit cops,” said Alanna Carmichael, a leader with Kenosha EquiTeens. “I am tired of fearing for my brother’s lives whenever they leave the house. I am tired of fighting for the same justices that my family fought for 60 years ago.”

This protest came in the wake of several days of violence and repression at the hands of police, military and paramilitary. After the fatal shootings on the night of August 25, repression was used against the people in the city. Unmarked vehicles with people who claimed to be police but had no identification stopped people and took them into custody in the early evening and into the night on August 26.

RELATED CONTENT: Hope is a Dying Ember for Black People in the US. Athletes Have Rekindled it

Some of those who were swept up in this wave of mass detention were members of SDS. A mass call-in campaign was organized to get them, and others freed from jail. The call to action generated thousands of calls from all across the country demanding their immediate release. Two of the SDS members, Victor Garcia and Adelana Akindes, spoke at the rally.

“Lots of us were disturbed when we found out about the Gestapo-like police tactics being used by the federal government in Portland, Oregon,” said Garcia. “I had no idea what to expect when that unmarked car with several masked and armed men came out, rushing at me, with fear that it was white supremacists coming to end my life and the lives of my friends.”

Garcia and Akindes both spent more than 24 hours in detention. They were separated from each other after being snatched up, taken to undisclosed locations, stripped, and given orange jumpsuits and a number. They were put into cells with others who had been detained; Garcia with 15 other men and Akindes with eight other women. They were not provided masks despite the close quarters.

RELATED CONTENT: A Tale of Two Teens: When White Killers Are Treated Better Than Black Victims

“I saw first hand the kind of culture that they cultivate there,” said Akindes. “They used every opportunity to dehumanize us, to make us feel like animals. The goal of them putting us there was to take us off the streets, to debilitate us so that we wouldn’t wanna keep fighting.”

After the rally, the protesters took the streets. They marched through working-class neighborhoods where many of the Black and Latino residents live. The marchers chanted things like “No justice, no peace, fuck these racist ass police” and “Jacob Blake” as passersby made their support known. Many people came out of their homes with their families and raised their fists. Cars driving by would throw their fist out the window and honk. Some even pulled over and chanted along with the marchers as they went by.

Near the end of the march, a few military trucks were spotted heading toward the protest. In a show of people power, the marchers stopped the trucks in the road. They put their signs in the windshield and shouted chants at them. Kenosha is currently occupied by a force of more than 2000 National Guard troops.

Kenosha police and other officials have doubled down in defense of their officers and their actions. The Kenosha police union released a screed blasting what is plainly obvious on the available video evidence as fake or misleading. Kenosha Police Chief Daniel Miskinis said that his officers did nothing wrong in allowing the murderer Rittenhouse to escape without being apprehended.

The situation in Kenosha remains tense, and with President Trump committing to a visit on September 1, it’s likely going to remain that way. As ever, the people will remain in the streets.