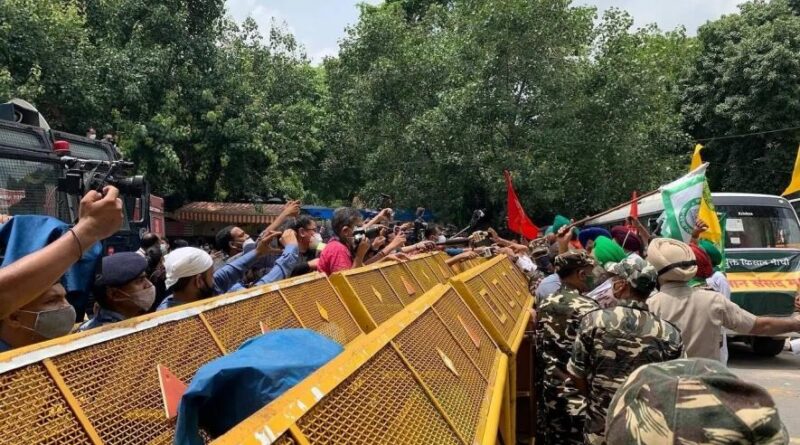 Starting Thursday, about 200 protestors will participate in the farmers’ parliament at Jantar Mantar, which will take place on each working day of the Parliament until the ongoing Monsoon Session ends.

Their union flags in hand, farmers organised what was the first ‘Kisan Sansad’ at Jantar Mantar on Thursday. It was not without its hiccups however, as media personnel found themselves barricaded a fair distance away from their congregation site earlier in the day. Media persons were allowed entry later, only after the farmers passed a “resolution” condemning the move – allegedly intended to impede coverage of the event – by the Delhi police.

Farmers, who have stayed put at the Singhu, Tikri, and Ghazipur borders against the Farm Laws since last November, had planned to protest against the Centre and conduct ‘Kisan Sansads’, which were to see the participation of about 200 protestors, on each working day of the Parliament until the ongoing Monsoon Session ended. It was earlier decided that the sansad would be organised outside Parliament building itself, but the permission for the same was denied by the Delhi police.

Called by the Samyukt Kisan Morcha (SKM) – the umbrella body of farmers organisations – the plan to hold the protest at Jantar Mantar eventually received a nod from the Delhi Disaster Management Authority (DDMA) on Wednesday; it had been allowed by the Delhi police earlier.

On Thursday, a six-member coordination body was constituted by the SKM to oversee the proceedings of the farmers’ parliament. These included Hannan Mollah from the All India Kisan Sabha (AIKS), Shiv Kumar ‘Kakkaji’ of the Rashtriya Kisan Mazdoor Mahasangh (RKMM), Yogendra Yadav, Manjit Singh Rai of the Doaba faction of the Bharatiya Kisan Union (BKU), Harmeet Singh Kadian, and Ravinder Singh of the Kirti Kisan Union (KKU).

“There will be three sessions of discussion in the day. The speakers and deputy speakers for each session will be selected on a rotation basis among the six members. For every ‘Sansad’ session in the coming days, there will be new members in the coordination body,” Ravinder Singh of KKU told Newsclick.

In the Kisan Sansad the protesting farmers refuted the “hollow claims” by government ministers that the farmers have not really explained what their concerns with the three laws were and were only harping on repealing them, the SKM said in a press statement on Thursday.

“The participants in the Kisan Sansad raised several points with regard to the unconstitutional nature of the law, the undemocratic processes by which the Government of India brought them in, and the serious implications that the law will have on farm livelihoods, as they discussed APMC Bypass Act in detail. They showcased before the world their intimate knowledge of this black law, and why they are insistent on a full repeal and nothing less than that (sic),” the SKM added in its release.

Two “resolutions” were passed by the farmers during the first session on Thursday, he added. “The first was to pay homage to our brothers and sisters – close to 600 – who have lost their lives since the beginning of the farmers’ protest at Delhi’s borders. The second was to condemn the barricading of the media and preventing them from covering our protest,” Singh said.

According to him, the entry of the media after the resolution was passed was “the first victory” of the farmers’ parliament. Newsclick couldn’t independently ascertain the reasons behind barring the media from covering the protest in the first place

Among other prominent faces, Rakesh Tikait of the BKU was also present at Jantar Mantar on Thursday. “Today, the Centre has finally accepted that those sitting at the borders in protest are farmers – till now they were not ready to accept even that,” he said, while addressing the ‘Kisan Sansad’.

Sukhwinder Singh of the Kisan Mazdoor Sangharsh Committee (KMSC), one of the farmers’ unions that is not part of the SKM, told Newsclick that it was the first time in independent India that a “parallel” parliament by farmers is being held while the actual Parliament was in session. “Our fight was against the farm laws, and it remains so even now. We will not step back, but make the Centre withdraw these legislations,” he said.

Singh of KMSC, who was present at Jantar Mantar with six members of his union was, however, seen sitting separately from the farmers’ parliament proceedings. When asked about it, he said: “We are together only in every decision. No meaning should be drawn from us sitting away.”

Sarabjit Singh Virk, a member of the committee told Newsclick that food will be provided for the farmers participating in the ‘Kisan Sansad’ from the nearby Bangla Sahib Gurudwara. “Our committee has been organising langar at all the three borders since last November. Now that farmers will arrive at Jantar Mantar to stage a protest, we will continue to serve them food as well,” he said.

Meanwhile, the Delhi Police had tightened security across the city, more so around the Jantar Mantar. Barricades, water cannons and riot control vans have been stationed there in view of the ‘Kisan Sansad’. Harpal Singh, organising secretary of the Chaduni faction of the BKU told Newsclick that “enough precaution” is also being taken by the SKM to avoid the entry of any “miscreants.”

Singh held up an ID card issued by the SKM, without which, according to him, entry to the ‘Kisan Sansad’, will not be allowed. Each day with a new contingent of farmers arriving to Jantar Mantar, these IDs will be issued to each one of them, Singh added.

“We don’t want to give this government any further reason to point a finger at us. We are determined to continue with out peaceful protest – even if that means sitting at the Delhi borders till 2024,” he said.

Featured image: Media personnel found themselves barricaded at a distance away from the site of the congregation earlier in the day. Image Courtesy – Kisan Ekta Morcha