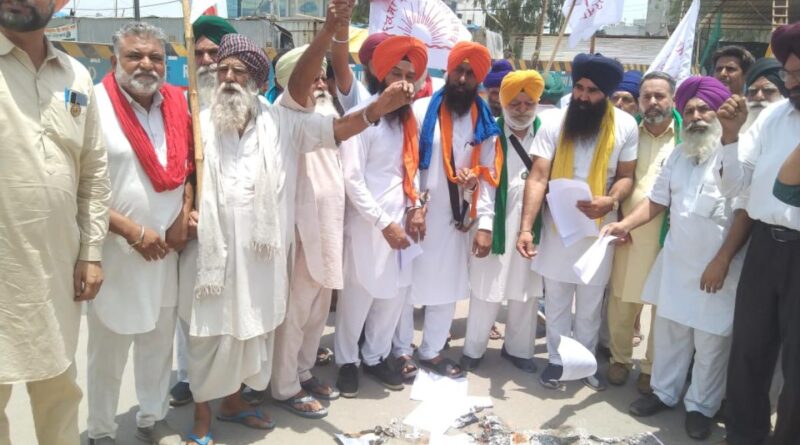 he protests mark one year of the Modi government bringing in ordinances to push the three controversial farm laws.

New Delhi: Farmers across the country on Saturday burnt copies of the three Central farm laws in front of homes and offices of ruling Bharatiya Janata Party (BJP) MLAs and MPs, observing the completion of a year when these legislations were brought as ordinances last year.

The Samyukta Kisan Morcha (SKM) – a collective of over 40 farmers’ organisations- had given a call to observe the day as Sampoorna Kranti Diwas or Total Revolution Day, as the day marks the historic call by legendary freedom fighter Jay Prakash Narayan to free the country from corruption and authoritarianism under then Prime Minister Indira Gandhi.

Saturday’s countrywide demonstrations saw significant support from youth, students and women’s organisations. At Singhu border on Delhi’s north-west front, where farmers are camping to protest the laws for more than six months, the leaders of SKM burnt copies of the law. Holding black flags, the farmers raised the slogans against Prime Minister Narendra Modi, Union Agriculture Minister Narendra Singh Tomar, among others. 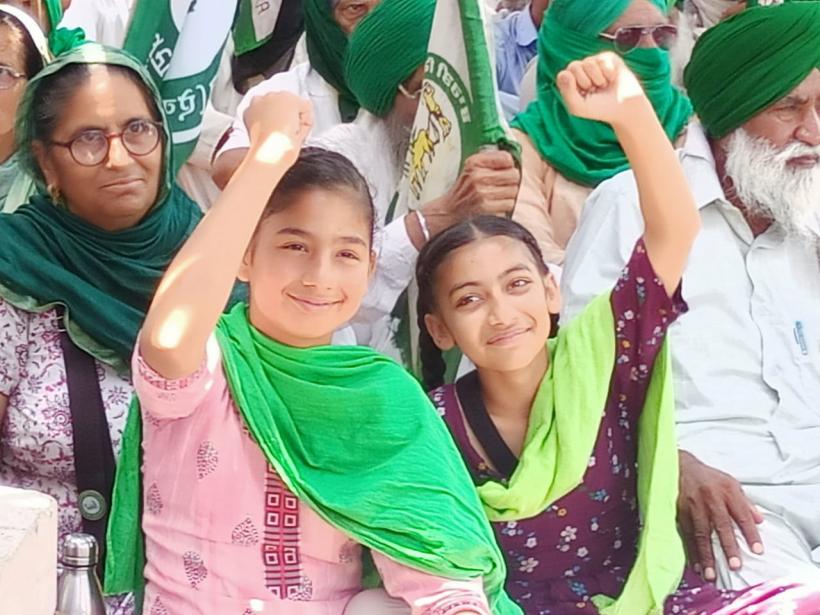 Addressing the gathering at the Singhu border, Vijoo Krishnan of the All India Kisan Sabha (AIKS) said farmers are fighting second struggle to save democracy and livelihoods of people. “On June 5, 1975, Jai Prakash Narayan had given call for total revolution or Sampoorna Kranti. On the same day, last year the BJP government brought in these laws. So, the farmers are fighting this struggle to save both democracy and the livelihoods of people. We have seen the repetitive storms have left our homes in tatters. But please remember, no storm can break our determination to fight these unjust laws.”

Citing an example, he said: “One of the laws aims to do away with APMC (Agricultural Produce Market Committee). In Bihar, the state government abolished the APMC in 2006. The farmers in the state are hardly getting 50% of the minimum support price. Is this the model we want in every state? We have seen it is political will that can deliver to farmers. Now, farmers in Kerala are getting almost Rs 1,000 above MSP (minimum support price) at the national level. Similarly, the state government has fixed the base prices of 16 vegetables, which if sold below the price, would be procured by the government.”

Krishnan reminded farmers that June 6, was the day when garlic growing farmers were killed by the Madhya Pradesh Police under the BJP government. “So, we need to understand what this government is offering. The garlic growing farmers complained that they should not get a price below Rs 35/kg. The government contended that it should be Rs 27 per Kg. Even if we accept its contention, the reality was that garlic sold at Rs 1 per kg in the Neemuch Vegetable Market whereas the same was sold at Rs 147 per kilo in Reliance Fresh. This is the model they are offering to us,” the AIKS leader said.

Away from the border, the protest saw huge gatherings in Punjab and Haryana where farmers peacefully assembled in front of BJP offices and burnt copies of the farm laws. In Mohali and Phagwara, farmers gheraoed the house of Union Minster Som Prakash. While the situation remained tense, police personnel were deputed to avoid any clash. Similarly, farmers organised protest rallies in Barnala, Mansa, Patiala and Hoshiarpur.

In neighbouring Haryana, the rage of farmers was felt by none other than Haryana Chief Minister Manohar Lal Khattar, who requested the protesters not to “disturb” the law and order situation. The protesters gheraoed the houses of state home minister Anil Vij and Assembly Speaker Gian Chand. Several farmers affiliated to Bharatiya Kisan Union tried to block the entry point leading to house of Vij in Ambala’s Shastri Nagar. The situation in the state remains tense after CM Khattar accused farmers of spreading coronavirus in rural areas as they frequently commute to protest sites at Delhi’s borders. The anger heightened after the state police arrested farmer leader Vikas Shishar and other protesters when they had gathered to oppose the arrest for allegedly “manhandling” Jannayak Panata Party MLA Devendra Singh Babli, an ally of the ruling BJP. 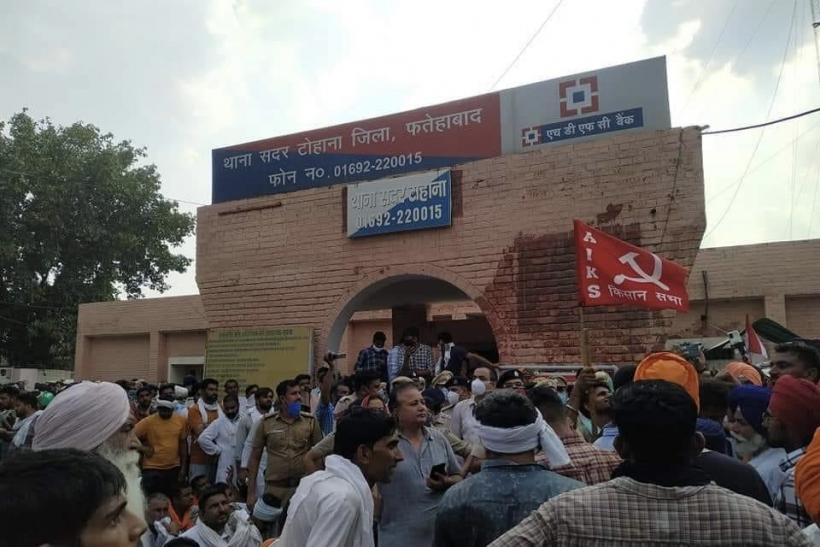 In Hisar, at the residence of Deputy CM of Haryana Dushyant Chautala, braving the deployment of hundreds of police personnel, thousands of farmers assembled and burnt copies of the Acts.

The call was also observed in Central, Northern and Southern India with protests happening in Madhya Pradesh, Chhattisgarh, Odisha, Andhra Pradesh and Karnataka. In Chhatitsgarh, the protests happened in Korba, Rajnandgaon, Sarguja, Durg, Koriya, Raigarh, Kanker, Dhamtari, Bilaspur, Champa and Balod among other places. Sudesh Teekam from Chhatisgarh Kisan Andolan, in a press statement, said the protesters gheraoed the office of Bilaspur MP Arun Sao and reiterated that the farm laws are now showing the impact when edible mustard oil is now out of reach of the common man and it is mainly multinationals like Adanis which are extracting the profits. He added: “The farmers are also fighting the struggle to save the biodiversity which would be killed if the extraction of mineral continues in eco-sensitive areas.” 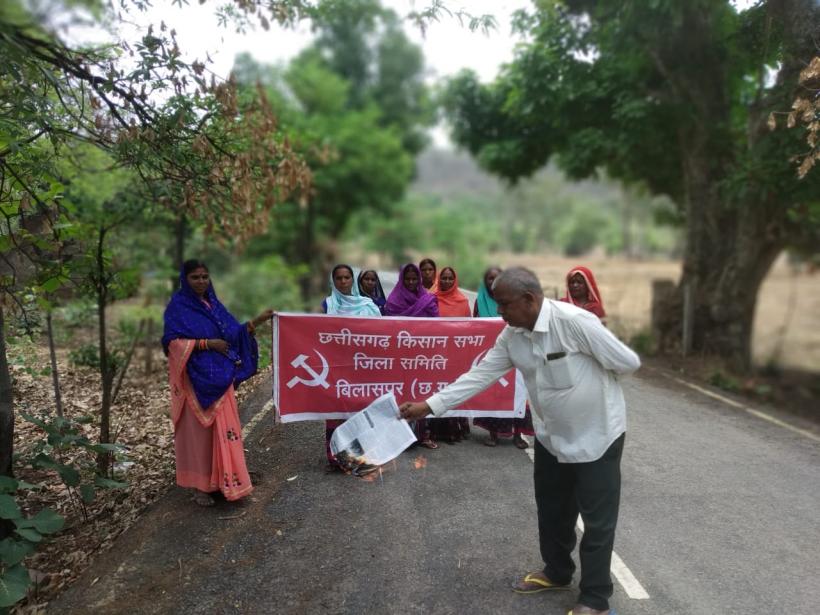 Protests were also observed in Chikballapur, Mysuru and Bangalore in Karnataka and Adilabad in Telangana and various parts of Tamil Nadu.