According to a source from Yemen’s Oil Ministry, 100,000 tons of oil worth $114 million will be loaded onto the vessel

According to local reports, a giant oil tanker named Isabella arrived at Al-Nashma port in Yemen on 29 June to transport a large shipment of crude oil – worth $114 million – on behalf of the Saudi-led coalition.

A source from the Yemeni Oil Ministry said that the ship made its way to Al-Nashma port from the Saudi port of Ras Tanura, adding that over 100,000 tons of Yemeni crude oil will be loaded onto the vessel, amounting to around one million barrels.

A source at the Oil Ministry in Sanaa confirmed that the vessel ISABELLA arrived at Al-Nashima port in #Shabwah, coming from the port of
1/2 pic.twitter.com/hfdcjJlU3R

A ship tracking website, MarineTraffic, monitored the arrival of the tanker, which reportedly bore a Panamanian flag.

Recently, several vessels have made their way to Yemeni ports in the provinces of Shabwa and Hadhramaut in order to loot millions of dollars’ worth of the country’s oil on behalf of the Saudi-led coalition.

On 26 June, a tanker operated by the UAE set off from Shabwa province’s Radhum port, after having stolen more than 400,000 barrels of crude oil from the oil-rich region, according to the state-run Saba News Agency.

The looting by the UAE-operated Golf Aetos vessel came just two weeks after another supertanker left the port of Ash Shihr in the eastern province of Hadhramaut with more than two million barrels of crude oil, worth over $270 million.

Just last month, it was reported that the Saudi-backed Yemen Transitional Council sold the Sector 5 oilfield in Shabwa to the UAE.

Media reports, however, claimed that the field was sold to “a fictitious company based at the port of Jebel Ali” in Dubai, as a front to cover up UAE profits made through the deal and through the Gulf state’s involvement in the war against Yemen.

RELATED CONTENT: OPEC Will Not Bow to US Pressure, Declare Saudi Arabia and UAE

Since the start of the Saudi-led invasion of Yemen in 2015, Saudi and Emirati troops, with the help of Takfiri armed groups and coalition-backed mercenaries, have occupied most of Yemen’s resource-rich southern and eastern regions, and have benefitted illegally from the natural resources of the invaded country.

This latest looting of Yemen’s oil by the Saudi-led coalition comes amid heated popular demonstrations in the country’s southern and eastern provinces, as citizens protest against the collapse of the local currency, a decline in services, and poor living conditions. 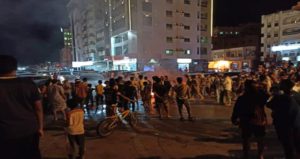 The Saudi-led war on Yemen has created what the UN describes as one of the worst humanitarian crises in the world. An air and sea blockade imposed by Riyadh has also pushed most Yemenis to the brink of famine.