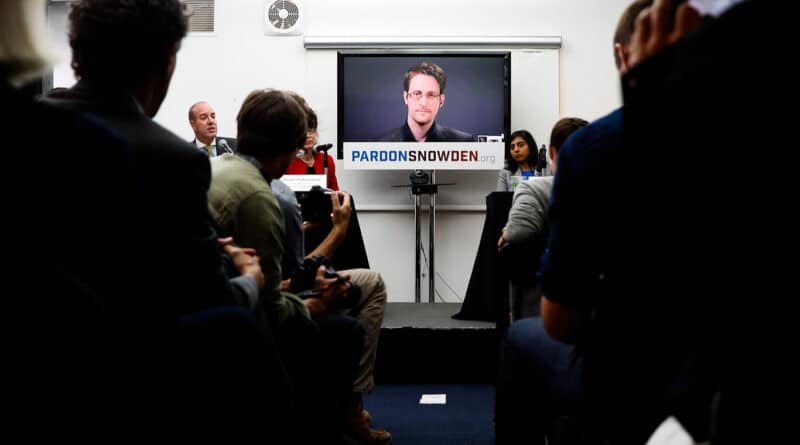 While the idea of pardoning one of the most prolific whistleblowers of our era drew together an alliance of those on the left and right, the centrist establishment reacted with predictable vitriol to the idea.

Amid mounting speculation that President Trump is about to announce a list of presidential pardons, calls for — and against — NSA whistleblower Edward Snowden’s name to be included are growing louder.

In November, as is customary, Donald Trump pardoned a turkey for Thanksgiving. Now, in the lame duck session of his presidency, he appears to be making a customary list of people to pardon as well. Influential and well-connected publication Axios reported, in a scandalized tone, that he is planning to hand out pardons “like Christmas gifts” to “every person who ever talked to [him].” In August, the president was asked about Snowden specifically, responding by saying that, “I’m going to take a very good look at it. I’ve seen people that are very conservative and very liberal and they agree on the same issue…I’m going to take a look at that very strongly.”

Now, a host of figures are calling in unison for Trump to follow through on the proposal. “President Trump is listening to the many of us who are urging him to pardon Snowden. It’s the right thing to do,” Florida Congressman Matt Gaetz said yesterday. Kentucky Senator Rand Paul agreed, slamming former Director of National Intelligence, James Clapper, in the process. “Clapper brazenly lied to Congress denying that the Deep State was spying on all Americans. Snowden simply revealed Clapper’s lies and exposed unconstitutional spying. He deserves a pardon from Donald Trump,” he wrote. Those calls were joined by a number of voices on the left, including former Green Party vice-presidential candidate Ajamu Baraka, who said, “I support pardons for Snowden, Assange and especially Chelsea Manning. All exposed the criminality of the Bush-Obama/Biden period.” The American Civil Liberties Union, who have previously described Snowden as a “patriot,” concurred, stating, “Edward Snowden blew the whistle on illegal government activity kept secret for years. Our democracy is better off because of him.”

Snowden — being Snowden — has used his platform to urge a pardon of Assange, which is vital for the same reasons and others.

Snowden is regarded as a hero around the world because he enabled everyone to see how dangerous & lawless the US Deep State is.https://t.co/iUersCx4SI

While the idea of pardoning the former CIA employee drew together an alliance of those on the left and right, the centrist establishment appeared totally against the idea. Former CIA director John Brennan bristled with indignation at Senator Paul’s remarks, replying:

“Jim Clapper has had a lifetime of dedicated and selfless service to America. Edward Snowden betrayed his country, providing exceptionally sensitive intelligence to China and Russia. You consistently demonstrate utter ignorance of U.S. national security. You disgrace the Senate.”

Upon hearing the news that Trump was considering pardoning Snowden, Susan Rice, now head of President-elect Biden’s Domestic Policy Council, suggested that this was an action so disgusting that it showed the Republican Party in a new light. “Congratulations GOP. This is who you are now,” she tweeted. Setting up a false dichotomy, David Weissman of the Lincoln Project asked why not pardon RussiaGate whistleblower Reality Winner instead. Meanwhile, New York Times columnist Kurt Eichenwald went on a spirited tirade, claiming that Snowden had given U.S. secrets to the Chinese government and that exposing American spying on Asian nations had likely cost lives, connecting Chinese repression in Tibet with his decision. “And if Trump gives him a pardon? Well, China will be laughing it’s ass off. So will Putin. And every U.S. enemy that Snowden helped,” he fumed.

“Edward Snowden is a traitor. He is responsible for the largest and most damaging release of classified info in US history. He handed over US secrets to Russian and Chinese intelligence putting our troops and our nation at risk,” wrote Liz Cheney, daughter of former vice-president Dick Cheney. “Pardoning him would be unconscionable.” This drew a storm of criticism online, not least from those pointing out her father’s own crimes. “Of course…The neocon ally of US liberals speaks up. Liz Cheney is an abject liar,” responded journalist Glenn Greenwald, “because she comes from a family of liars and her career rests solely on her father, one of this century’s worst liars.”

“If the people most desperate for you not to be pardoned are the professional liars of CIA, the criminal domestic spies of NSA, and bloodthirsty neocon warmongers and monsters like the Cheney Family, that’s a pretty good sign that you’ve served justice and deserve a pardon,” he concluded.

The Cheney ideology supporting forever wars puts more troops at risk than @snowden ever did. https://t.co/BNbEVa4E6C

For his own part, Snowden has actually campaigned for the release of Julian Assange, rather than himself, directly asking the president for clemency for the Australian publisher. Meanwhile, Reality Winner’s family appears to be pinning their hopes on the incoming Biden administration.

Snowden shot to international fame in 2013 when he shared a vast archive of NSA documents with Greenwald, documents which exposed the vast extent to which the NSA and other organizations were spying on the world, including the American people — something which its leaders had explicitly denied under oath. He was immediately charged under the Espionage Act of 1917, passed when the United States was at war during World War I. He has spent the last seven years in Russia, unable to return to his homeland without facing prosecution. In October this year, he was granted permanent residency in Russia. Considering the treatment of Assange and Chelsea Manning, others who exposed the secrets of the U.S. government, it is highly unlikely that, without a pardon, he will be able to safely return to the United States. Manning, whose sentence President Obama commuted in 2017 as he was leaving office, has faced constant harassment and was reimprisoned for refusing to aid the prosecution of Assange.

Trump has made many contradictory statements with regards to whistleblowers. Which camp the famously mercurial president eventually sides with remains to be seen.

Featured image: Edward Snowden is seen on a television screen via video uplink from Moscow during a news conference to call upon President Barack Obama to pardon Snowden before he leaves office in New York, Sept. 14, 2016. Mary Altaffer | AP