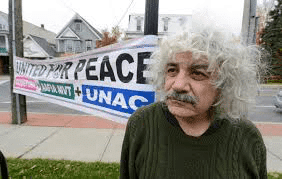 Well, we made it to Venezuela, but it wasn’t easy. The US has closed the Venezuelan embassy because they do not recognize the government. Therefore, it is not possible to get a visa. This might be one reason that the US closed the embassy. If you can’t get a visa and go Venezuela, you can not see for yourself what is going on and challenge their narrative. But six of us did make it and others are delayed but are getting in too. American airlines was the worst. If you were on American airlines for the first leg of you journey, they just would not let you on the flight.

On our flight into Caracas, was Bahman Azad the organizational secretary of the US Peace Council, who is sponsoring the trip, Gerry Condon, pres. of Veterans for Peace, Sara Flanders, co-coordinator of the International Action Center, Ajamu Baraka, national coordinator of the Black Alliance for Peace, progressive journalist, Eva Bartlett and me, Joe Lombardo, co-coordinator of the United National Antiwar Coalition. Because we could not get visas before we left, the Venezuelan government sent us each a letter saying that we can enter the country and the authorities in Venezuela let us through.

Later today and tomorrow, Sarah Martin from Women Against Military Madness, Kevin Zeese and Margaret Flowers of Popular Resistance, Darien De Lu, President of Women’s International League for Peace and Freedom – US, Miguel Figueroa, president of the Canadian Peace Congress and Daniel Shea, board of directors, Veterans for peace will arrive to complete the delegation.

We were met at the airport by members of COSI (Committee of International Solidarity). They took us to the hotel, where we are staying and explained to us the situation with the black outs and the two competing demonstrations yesterday. Eastern Caracas is an upper and upper middle-class area that is the base of the opposition to the Maduro government. Western Caracas is working class and Black with a lot of support for the Maduro government. It used to be a real shanty town, but the Bolivarian revolution put resources into this community and now the people live in nice apartment buildings.

When we arrived, there was no electricity. About 80% of the population was without power. The hotel we are staying in has its own power plant so there has been electricity and wifi but it is very sporadic and, as I write this, I am in my room writing without electricity or wifi. It was explained to us that there have been 2 attacks on the Venezuelan power system. Both were software attacks that effected computers that regulate the power and send it where it needs to go. If the power can’t be sent to the needed locations, there is the danger of overload and so the system shuts down. The first attack was on Thursday. The electrical workers were able to restart and get the computers going but then there was a second attack and the computers went down again and, as of this writing, the power is still down.

We were told that despite the power outage the two competing demonstrations happened yesterday. The power outages also meant that the debit cards that people use to buy things did not work, the traffic lights did not work but most importantly, the subway system did not work, and this is the main way that people, at least working people, get around in Caracas. However, despite the power outage, the pro-Maduro demonstration was very large. The pro-Guaido action was smaller than expected. Progressive folks that we talked to about this said that since the February 23 failed attempt to get the “aid” across the border and to get soldiers to come over to their side, Guaido has lost momentum and the small turnout at the demonstration was an example of that. It was not the pro-Maduro forces that told us about the small turnout at the Guaido demonstration but a foreign reporter who attended both demonstrations. At the opposition demonstrations, Guaido said that it is constitutional for a legitimate government – meaning him – to ask for outside military intervention and he said that he is not saying when, but military intervention will happen. Some people thought that the blackouts were actually a practice for what the US can do during an invasion to disrupt communications.

I saw the CNN coverage of these demonstrations. CNN tried to put a “good face” on what happened yesterday. They said something like the Maduro demonstration just had the same old people and Maduro blamed everything on US sanctions and intervention. They did not say the relative size of the actions, but they showed a little of what looked like a very sparse guaido action and interviewed a woman who screamed about the Maduro “dictatorship.”

Throughout the day, we were able to have informal discussions with members of the COSI team who were hosting our delegation including Carolus Winmer, its president and with Carlos Ron the Vice Minister of foreign affairs of Venezuela.

By the end of the day, all but 2 of our delegation had arrived and we held a meeting with our hosts where we went over our agenda for the week and discussed the possibility of our group holding an action in Caracas.

We have already had a lot of media requests for interviews from our delegation and are planning a UN press conference when we return and a public webinar report back. UNAC will be publicizing both.