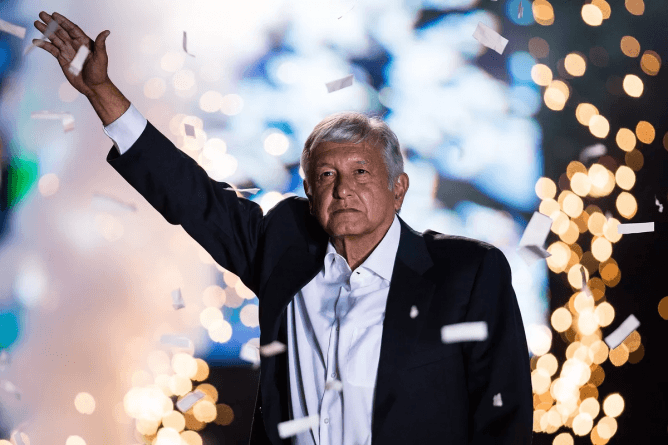 Shannon O’Neil, is someone whose opinion matters, being the Latin American expert for the Council on Foreign Relations. Steve Ellner (Universidad de Universidad de Oriente, Puerto La Cruz, Venezuela), who SHOULD be listened to in the halls of power, but, alas, I know only from Democracy Now and his excellent blog (steveellnersblog.blogspot.com) has, better than I ever could, responded to Ms. O’Neil’s recent article for Bloomberg, which suggests the same “mainstream” logic used to justify intervention in Venezuela could be applied to Mexico… and the reason I’ve been so obsessed lately with US media coverage of the Bolivarian Republic.

THE PLAYBOOK USED AGAINST CHAVEZ NOW APPLIED TO LOPEZ OBRADOR

Shannon O’Neil kicks off her article for Bloomberg titled “López Obrador is Dismantling Democracy in Mexico” with the astounding statement that between AMLO (López Obrador) and Jair Bolsonaro “it is Mexico’s democracy that is under greater threat.” Never mind that Brazil is rapidly degenerating into the repressive state that Bolsonaro’s neo-fascist rhetoric and glorification of the 1964 coup signaled. And never mind that AMLO is really being called out because he has implemented nothing more than timid, but much needed, changes in Mexico.

The article goes on to point to AMLO’s “power grab” in the form of strengthening the executive branch at the expense of the legislative branch, even though his Morena party controls congress. He is also rebuked for going beyond the established system of electoral democracy by calling referendums which are allegedly tantamount to demagoguery. These are the same accusations made by Jorge Castaneda in his co-authored Leftovers in 2006 which called AMLO a “populist” (in the bad sense of the word) and a member of the “bad left.” Nowhere does Castañeda or O’Neil explain why referendums are inherently undemocratic.

The article also claims that AMLO is riding roughshod over established institutions such as the judicial branch. Nowhere is mention made, however, of what Trump calls the “deep state” which will obstruct any meaningful change in Mexico and eventually sabotage AMLO’s rule.

O’Neil also warns that AMLO “is building a parallel labor confederation to challenge the Mexican Workers Confederation, long allied to the once-dominant Institutional Revolutionary Party (PRI).” The implication is that any attempt to alter established institutions is tantamount to demagoguery. Nowhere is mention made, however, of the fact that the Mexican Workers Confederation is notoriously corrupt and part of the populist (also in the bad sense of the word) network which was institutionalized in Mexico over half a century ago.

RELATED CONTENT: The Dignified Position of Mexico in Uruguay

O’Neil’s accusations against AMLO bare an uncanny similarity with the narrative used against Chávez from the very outset of his rule in 1999. The real playbook which has been revealed by so many experiences of progressive governments in third world countries over the years consists of Washington playing back seat and maintaining a low profile while it encourages the local elite consisting of business interests, traditional parties and politicians, the church hierarchy, and the international and local media to promote destabilization in the name of resisting demagoguery, caudillismo and authoritarianism. If that doesn’t work, and if AMLO holds his ground, then Washington will shift into second gear by playing an increasingly activist role. That’s what Venezuela has taught and that’s what we can expect in the case of Mexico. O’Neil’s article sheds light on the future scenario.