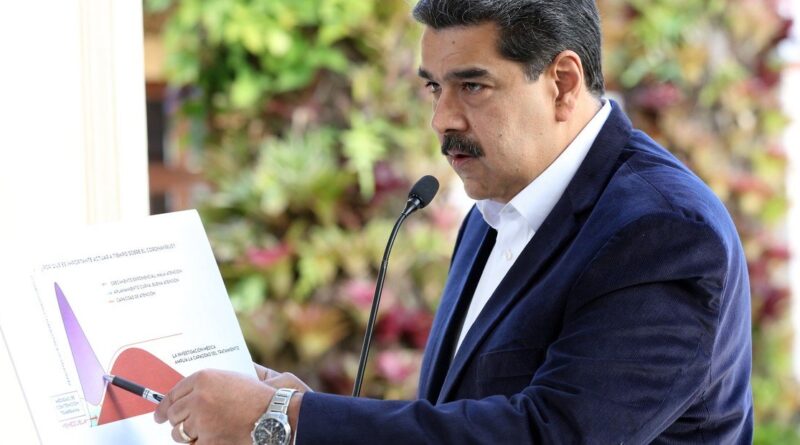 “Elliott Abrams… you’re quarantined… My regards to Elliott… Your message has arrived, I agree, go ahead… “..said a message from Bolivarian President Nicholas Maduro. At the same time, he confirmed the arrival of a Norwegian delegation to Caracas, hosted by the Minister of Communication: “Jorge Rodriguez – said the president – is already meeting with the Norwegians, he has received them and now he is coordinating what is left to be done, you know our commitment to dialogue, democracy and freedom”.

On July 24, Norwegian Dag Halvor, head of the unit in charge of international mediations, the Peace and Reconciliation Unit, announced that a delegation of Scandinavian diplomats was in Caracas for an “update on the health and political situation,” and immediately the various right-wing coup factions entered into a state of frenzy.

In 2019, political dialogue took place in Norway between the Bolivarian leadership and the Venezuelan sectors that respond to North American interests. And after negotiations it was a phone call from the United States administration that prevented the signing of an agreement, which was practically ready.

At that time, the self-proclaimed “interim president” Juan Guaidó announced his support for the unilateral coercive measures again issued by the U.S. government against Venezuelan officials and institutions. Even now, Guaidó has said that his meetings with the Norwegians will only serve to reiterate his conditions, and he has repeated the refrain about the “end of the usurpation” and the “transition government”.

On Monday, a declaration signed by the Venezuelan extreme right, led by María Corina Machado and Antonio Ledezma was issued. A statement in six points: for rejecting the beginning of any dialogue session under the auspices of Norway, considered “a closed chapter”; for reiterating that “the only path to Venezuela is the ‘cessation of usurpation,’ and that “it is impossible to participate in dialogues promoted, organized and controlled by criminal mafias”.

A grotesque statement, given the pedigree and friends of this gang of criminals who have been blackmailing and devastating the country with their criminal methods for years. As all thinking people who look at the facts and are not clouded by fanaticism know, these oligarchic mafias do not answer to the country, but to the big international corporations.

RELATED CONTENT: On August 10 Venezuela Will Begin A Reopening for Labor

Because they belong to the oligarchy, they are convinced that the country’s resources belong to them by right and that their privileges are untouchable, and they look perpetually to the north: more specifically to Miami and Florida, one of the most powerful and active nerve centers in the destabilization of Cuba and Venezuela.

Through Venezuela foreign minister, Jorge Arreaza, the Bolivarian government has recently hoped that the next U.S. administration to be voted in at the polls in November will not be blackmailed by the Miami and Florida mafias, which have always played an important role in determining U.S. foreign policy in Latin America and the Caribbean.

And in this context we must also understand the exchange in the distance between Maduro and Abrams. In response to the Venezuelan president’s statements, the latter was quick to deny that he had sent a message “to the dictator”. To Bloomberg reporter Alex Vasquez, Abrams said the United States has not sent any message “outside of our public statement that Venezuela’s recovery will begin the day of his departure and that we are willing to discuss the details of his departure.”

For Abrams, there will be no dialogue as long as the Bolivarian government insists on calling parliamentary elections and does not commit itself to “a transitional government. Until then, Abrams reiterated, the U.S. government will continue “with its strategy of pressure, both through sanctions and through diplomatic activities,” because the overall strategy “is to prevent the regime from having revenues and to continue to pressure the ways in which it operates, particularly in the oil and gold sector.”

As evidence, Secretary of State Mike Pompeo announced new “sanctions” against two Venezuelan government officials, former Electricity Minister Luis Motta Domínguez and former Deputy Finance Minister Eustiquio Lugo Gómez, for alleged misappropriation of funds by the state electricity company Corpolec. For the accusation, Pompeo reiterated his support for the thief Guaidó, even calling him a champion of the “fight against corruption and for the peaceful restoration of democracy and economic stability”.

However, Abrams said he had talks with the Norwegian delegation currently in Caracas, which made, “a difficult journey due to the pandemic and which we hope will lead to successful negotiations in the coming months or next year”.

This is double message to be placed in the US pre-election context. A country where the coronavirus has already caused more than 150,000 deaths, and where the Latino community is at greatest risk, both from the point of view of contagion and from the loss of basic rights: first, work, in the face of more than 30 million unemployed and Trump’s intention to cancel Obama’s facilities for greater equity in the allocation of households to migrants.

The Latino community’s vote is at the center of the electoral debate between the White House mogul and his democratic antagonist, Joe Biden. This time around, 32 million Latinos will have the right to vote, 5 million more than in 2016. For the first time, they represent the largest minority, equivalent to 13.3% of those eligible to vote, compared to 11.9% in 2016.

About 62% of Latinos favor the Democratic Party, while 34% favor the Republican Party. However, consultants have warned Democrats not to underestimate the undecided, and to that end Biden is making ads in Spanish, especially in Florida and Arizona, two states considered key to the Nov. 3 result, where the Latino vote could make a difference.

From the United States to Europe, Venezuela is used as a pretext for domestic policy issues. I only listen to CNN to notice the great bias in the treatment of news related to the coronavirus, as distorted as those appearing in Europe and only alarmist with not even a hint of data that would allow us to frame Venezuela’s successful figures in comparison with the Latin American and international context. “We need a great information campaign to spread the truth about Venezuela”, Maduro said.