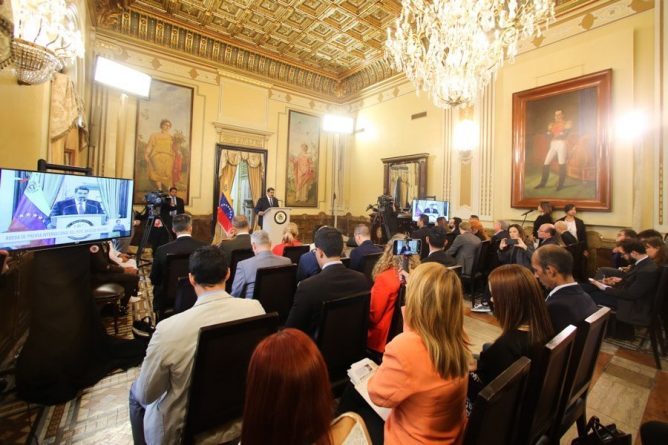 President of Venezuela, Nicolás Maduro, reiterated his support for the Montevideo Mechanism proposed by the governments of Mexico, Uruguay, Bolivia and the 14 Caricom countries in the Group of International Contact on Venezuela, which was signed in the Uruguayan capital last Wednesday.

“The Governments of Mexico, Uruguay, Bolivia and Caricom, signed a document called the Montevideo mechanism, which respectfully makes way for a dialogue between Venezuelans” affirmed the Venezuelan President.

“I am of the immediate disposition to join any action that goes along the road of diplomacy, dialogue, understanding and meeting among Venezuelans,” he said.

He described the Montevideo Mechanism as a “very important initiative. I think there has been a general reaction in the world of repudiation and rejection of Donald Trump’s threats. ”

On the other hand, Maduro rejected the document of the Contact Group of the European Union (EU) issued last Thursday, which aims to place conditions on the Government through bias, ideology and the “extremism with which they see Venezuela”.

“The European Union is doomed to failure if it continues to listen and obey the Venezuelan far right,” he said.

The communique promoted by the EU contains the condition of organizing early presidential elections in Venezuela as a prerequisite for opening a dialogue. “This is in contradiction of the most basic negotiation principles” an international expert said to OT.

However, the Venezuelan leader said he is willing to receive the delegation sent by the European Union to assess the situation in the country. “I hope the contact group of the European Union will serve to listen to Venezuela and actually have ‘contact’ with us,” he stressed.