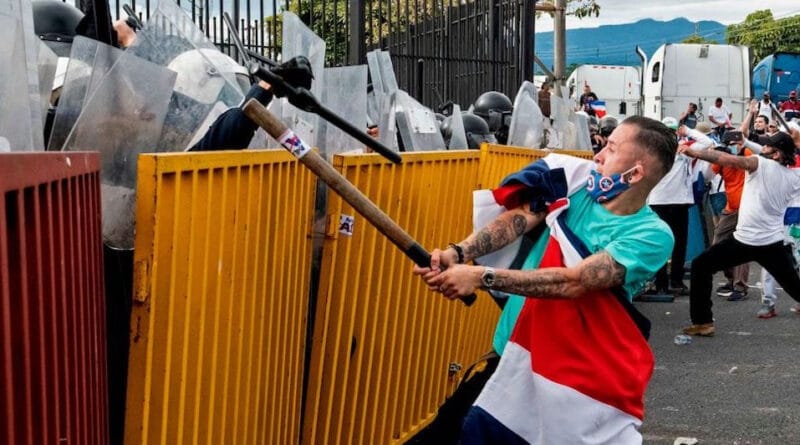 October 19, 2020.-  A mass rebellion reminiscent of the Yellow Vest movement in France has forced the government of Carlos Alvarado to back down from its plans for destructive tax increases, cuts to public services, and privatizations. The rebellion has changed the political dynamics in a country which was formerly seen as “the Switzerland of Central America.”

A nearly three-week national general strike has ended with a temporary victory for the people of Costa Rica. The strike, which at times took on the character of a mass rebellion with insurrectional elements, was initiated to protest a package of tax increases, cuts to public services, and privatizations of public assets. These reforms were demanded by the International Monetary Fund as their conditions for granting a $1.5 billion loan, and proposed by the neoliberal coalition government of Carlos Alverado.

The strength of the movement has forced the government to withdraw temporarily from its negotiations with the IMF. This is being seen as a direct defeat for the government, leaving it little margin for maneuver against the workers and poor of this thoroughly imperialized country.

The rebellion was organized and initiated by an ad hoc citizens’ coalition which called itself Rescate Costa Rica (Rescue Costa Rica). It was initially made up of small businesspeople, small farmers, and the rural poor. Its class composition shifted toward the working class as the rebellion gathered into its fold the rural poor, day labourers, and workers in the informal sector, a group which makes up almost 60% of the Costa Rican workforce.

Like the Yellow Vest movement in France, the Rescate movement took to the streets en masse, creating over 90 major and hundreds of minor road blocks and barricades, effectively shutting down transportation across the country.

This tactic was helped by the thousands of truckers who turned their rigs into instruments of struggle: everything from blockades by trailers to septic tank truckers who turned their sewage hoses on police attempting to break the barricades. Dump truck drivers unloaded piles of dirt and stones across the highways to reinforce the barricades, and when confronted by the riot squad, they would hurl boulders down upon the heads of the police.

The riot police are special squads of the Fuerza Publica, the national police force with 30,000 members charged with keeping order. In many cases there were pitched battles between the riot police and those occupying the highway system. These battles were especially prevalent in the north of the country around Las Canas, and in the southern Pacific county of Perez Zeledon. Both areas are heavily dependent on agriculture, a sector which has been particularly hard hit — both in the present time, and as a long-term tendency as a result of the Free Trade Agreement signed a dozen years ago.

As Costa Rica has no army, the police serve as the direct instrument of repression. The government’s use of the police to break the movement has liberated people from an image of police who “serve and protect,” which the Costa Rican oligarchy likes to project. The mass struggle has shown clearly who the cops “serve and protect.”

This was shown in glaring detail during a national march against the government on October 12. Captured on film, two police agents dressed as protesters attempted to physically confront a line of police blocking access to the presidential residence.

After their “arrest,” video footage emerged of these two agents fraternizing with the cops, and they were quickly identified as members of a regional police delegation charged with anti-riot duties. Under questioning, the Minister of National Security admitted that the two cops were agents and that the government used infiltration tactics to “maintain order.” Needless to say, this came as a shock to many Costa Ricans and did nothing to enhance the reputation of either the government or the national police.

The political fallout from this mass movement has in many ways changed the dynamics at work within the social and working-class movements. The government, in withdrawing its proposed package, was forced to call for a national dialogue mediated by the Catholic Church. This call was roundly condemned as a cynical political ploy to try and get the rebellion off the streets.

This was the same ploy used by the neighboring regime in Nicaragua, where Ortega and Murillo tried to bring the leadership of the student-led rebellion in 2018 to heel — a ploy that was only partially successful.

Because of the outcry against this maneuver, Alvarado has been forced to grant concessions around the make-up and the authority, as well as the agenda, of this national dialogue. While it can be used by the government as a way of backing down from their original package, this part of the ploy has been openly discussed in the media, and it is a dangerous game for the government to try and play.

In addition, the dialogue gives the mass movement, and in particular the trade union movement, time to discuss and settle internal matters. Despite a massive and militant show of force during a union-led march during the second week of the rebellion, the trade unions have been split as to how to handle the situation.

The trade union forces at the Costa Rican Electrical Institute (ICE), for example, are led by bought-off leaders who, like the AFL-CIO bureaucrats in the U.S., are water carriers for their preferred capitalist party, in this case the Citizens Action Party led by Alvarado.

The ICE workers can by themselves bring down the government because they control both the electrical system and the country’s central telecommunications backbone. Previous administrations have managed to split the ICE workers into different union groupings, to better control this highly skilled but not exceptionally highly paid workforce. The building of unity amongst the ICE workers with a new and militant leadership is one of the most pressing tasks facing the Costa Rican Left.

The dynamic opening up amongst ICE workers is the same one at work throughout the trade union and social movements. The issue boils down to this conundrum: the masses are prepared to fight. They have shown that willingness three times in the past several years, including a six-month teachers’ strike which ended up cancelling the school year, just before the outbreak of Covid-19. The question facing everyone is: how can we win?

Not only has the rebellion posed the political issues squarely before the mass movement, it also has shown the weakness of the Alvarado government, with very little margin of maneuver left in the midst of an economic disaster and a health crisis.

The outbreak of Covid-19 was successfully handled for the first several months, as the strict implantation of lock down measures kept the death toll to under 10 persons from March until June, and the number of cases under 200. But faced with the standstill of economic activity for small businesses, the tourism industry, and the informal sectors (street vendors, farmers markets, and the like) — the political base of support for the PAC — Alvarado began a campaign of convincing Costa Ricans that the government had the pandemic under control. Then he began lifting the restrictions.

The results were more than predictable. Covid-19 cases skyrocketed and the death toll has soared. In addition, the healthcare refugees pouring across the border from Nicaragua — where the Ortega-Murillo regime first tried to deny that there were infections, and then began holding mass, maskless marches against Covid-19, claiming it was an imperialist plot — carried infections into first the border regions, and then into the Greater Metropolitan Area (GAM) of San Jose itself.

During the first months of the lock down, monetary relief was offered to all families in Costa Rica. But as economic activity ground to a halt, the government, through the central bank, claimed it could no longer do so. This increased the political pressure on the government to reopen. This pressure was applied both by the workers in these sectors and by the petit bourgeois layers who were going bankrupt in record numbers as their customer base disappeared.

In what at first appeared as a bizarre rant, the head of one of the nurses’ unions claimed that Covid-19 was being used by the government as a means to drive the competitors of the largest firms owned by the national oligarchy out of business. Yet this was the perception of large numbers of small business people, and were the tinder to add to the fires of the brewing rebellion.

Costa Rica faces a fiscal crisis of major proportions — of that, all are agreed. How it is dealt with was the underlying theme of the rebellion. The homemade placards which read: “My country is not for sale to the IMF” were seen everywhere throughout the country.

It was a statement that Costa Ricans, the working and popular sectors, were not prepared to pay for a crisis they didn’t cause. It was also a statement, shown in mass action, that they were prepared to fight those who tried to make them pay. The revolutionary wave has paused, for the moment, to catch its breath.