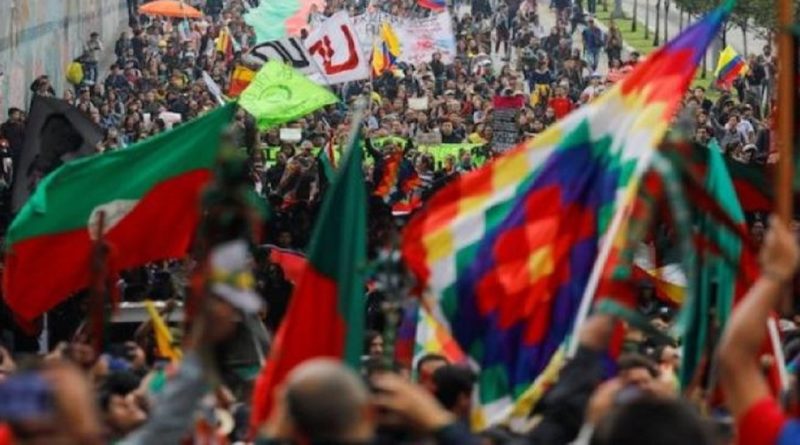 On Nov 21, the Colombian people began a national strike against the neoliberal and repressive policies of rightwing President Ivan Duque. The national strike started in the large cities of Colombia including Bogota the capital, Cali, and Medellin, but now has spread throughout the country. It is the biggest national strike since 1977, which won major labor reforms.

Participating in the strike are members of trade unions and social movements, peasants, Afro-Colombians, Indigenous people, feminists, members of LGBTQ community organizations, organized groups of soccer fans (barras), as well as collectives of political prisoners. The heightened militarization and neoliberalization which places the profits of foreign corporations over the needs of the Colombian people has caused the people to unite.

Protesters have been met with repression. On Nov. 23 Dilan Cruz, only 18 years old, was shot in the head and killed by a member of National Police’s anti-riot squad ESMAD as he participated in a Bogota demonstration in support of the strike. Cruz has become a symbol of the young, fearless Colombian resistance movement. The Colombian people demonstrate their courage to the world daily and send the state a message that they will not be dominated by fear.

Among the issues raised by the strike are constant repression and massacres by the state, including the killing of children, attempts to destroy the country’s Peace Accords, privatizations of public institutions, tax hikes, new restrictive labor laws, attacks on youth, pensioners, farmers and on public education.

In early November it was discovered that in August somewhere between eight and 18 children were killed in a bombing raid conducted by Colombian military in the Department of Caqueta. The Colombian military claimed those killed were leftwing guerillas. This is a continuation of a long-time practice that has become known as “falsos positivos” (false positives)—the military claiming the civilians it kills are guerrillas. The military does this in order to continue killing with impunity, and to justify its U.S. military funding.

This time, however, the lie did not work. The August massacre of children led to an impeachment hearing in the Senate against Minister of Defense Guillermo Botero. Once evidence surfaced showing that not only had the Colombian army conducted the massacre but also tried to cover it up, Botero resigned.

RELATED CONTENT: Colombia: The One Awake, the One that Can’t Sleep

Falso positivos killings have been committed for decades, and military officials who commit these extrajudicial killings are often times rewarded with promotions and time off. For example, when Juan Pablo Rodriguez Barragan was the head of the Fourth Army Brigade, that brigade was responsible for 28 extrajudicial killings. Barragan has since been promoted, and is now the highest ranking member of the Colombian military. Not surprisingly, he took part in Command and General Staff Courses given to Colombian officers by the United States.

In November 2016 a Peace Accord was negotiated between the Colombian government and the Fuerzas Armadas Revolucionarias de Colombia – Ejército del Pueblo (FARC-EP), where this guerrilla group agreed to disarm. While the FARC-EP put down its weapons, the rightwing paramilitary has remained alive and active with no accountability. Since the Peace Accord was signed the government has killed more than 700 social leaders for defending their land rights, advocating human rights, workers rights, etc.

This violent repression overwhelmingly impacts Indigenous and Afro-Colombian communities. According to the National Indigenous Organization of Colombia, since Duque assumed office in August 2018, 134 members of different Indigenous movements have been assassinated. Because of these repressive policies Colombia has the highest number of internally displaced people in the world .

Adding more fuel to the fire, on Oct. 27 Semana magazine revealed that members of the Army conspired through WhatsApp to assassinate Dimar Torres, a former FARC member who was released from prison and able to rejoin civilian life due to the peace deal.

The Colombian military, which prides itself on it extreme repression of anyone who challenges the rightwing policies of the state, receives about $450 million annually from the United States. The U.S. has fervently encouraged military repression in the country, especially when it protects their corporate interests.

Unsurprisingly, the forceful substitution program promotes use of Round UP Ultr, a pesticide produced by the U.S. agrochemical giant Montsano. Round UP is being indiscriminately sprayed on all crops. It kills all edible crops, leaving farmers without their harvest. When the farmers protest they are met with violence. On Oct 5, 2017 when a group of farmers in Tumaco demonstrated against the forced eradication of their crops, secruity forces opened fire, killing 16 people and wounding more than 50.

Ironically, the coca leaf is the quickest to re-grow after being sprayed. This means that in order to survive farmers have few options but to re-grow coca leaves in areas that are frequently sprayed .

In addition, Duque has undermined the power of the JEP (Special Jurisdiction for Peace) which was set up in 2016 after the Peace Accords to uncover and adjudicate serious human rights violations committed during Colombia’s five-decade internal armed conflict, such as kidnapping, torture, extrajudicial executions, sexual violence, forced displacement and recruitment of minors.

In August 2018 Colombia’s Constitutional Court approved as law 159 articles which established the details of the JEP’s authority. In an attempt to derail the Peace Accords and strip the JEP of its power, Duque then announced objections to six out of the 159 articles of the law.

Duque has also cut funding to programs created in the Accords to support the economic and social transition of former combatants in order to reintegrate them into society.

“El Paquetazo” refers to a wave of neoliberal economic policies that have negatively impacted workers and youth. The first is Labor Reform Law 212 of 2019 that was filed by former president and current senator Alvaro Uribe, a strong ally of Ivan Duque. This law seeks to cut the minimum wage of youth under 25 by 75 percent, create a minimum wage which changes based on the productivity of each region, and institute a new way to calculate social security that will diminish retiree’s checks.

Additionally, the new Holding Estatal de Servicios Financieros privatizes 16 public institution, transforming them from service-based to profit-based. This could also lead to massive layoffs. The paquetazo includes a 35 percent raise in electric tariffs for people who use Electricaribe. The plan proposes eliminating state contributions to pension funds in Colpension, Colombia’s Administration of Pensions, and decrease pensions to below the minimum wage while raising the age of retirement.

Social movement organizers have identified the International Monetary Fund and the World Bank as pivotal in promoting these reforms.

The Colombian people are also demanding larger investments in their education system. After public university students took to the streets October in a national student strike, Duque promised to invest $1.3 million over a four year period to rebuild public universities. This has not happened. Instead, 98 percent of a state-funded program titled “Ser Pilo Paga” has been invested in private universities. Currently 60 percent of students who graduate from public high schools are unable to enroll in public or private universities .

U.S. behind repressive and neo-liberal policies

The repression and neoliberal reforms in Colombia are the direct results of U.S policies and the billions in Pentagon funding given to the Colombian military and the so-called “security” forces. Since the Obama administration, the United States has not supported the Peace Accords and has aligned itself with far right political leaders including ex-President Alvaro Uribe and current President Ivan Duque. The situation has worsened as Duque, Trump and their allies do all they can to repeal what remains of the Peace Accord.

All progressive people should stand in solidarity with all those advocating for the immediate end to the political persecution of human rights, social and political leaders in Colombia and and an end to neo-liberal policies that prioritize the needs of foreign corporations over those of the Colombian people.

Both the Colombian and U.S. government need to abide by what was agreed to in the Peace Accords. All power to the people! El Pueblo No Se Rinde Carajo!