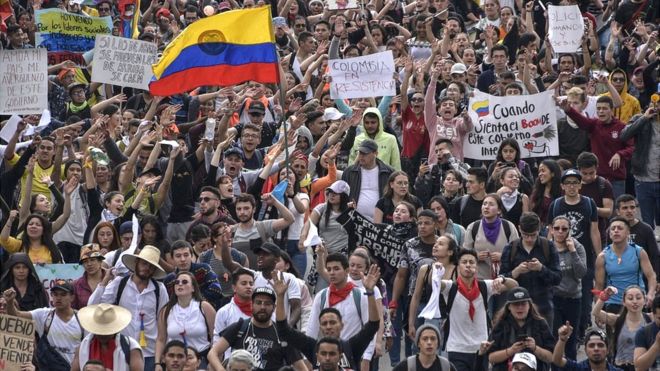 Colombian cities are waking up and their streets are roaring as they haven’t done for over forty years, despite the struggle not ceasing in the country’s rural areas over that time. Most of the massacres and mass human rights violations during the last decades were carried out there under the argument of “separating the fish from the water” (being the guerrilla the fish and rural areas the water) and they are the main scenario for the genocide of social leaders today.

Colombia is a country ruled by mafias that have infiltrated the State; the Uribe movement, in power since 2002, is the utmost expression of it and even those who voted for them in 2018 have run out of patience.

The reasons for the social unrest in Colombia are varied, including a new neoliberal package; an absolutely unpopular president; an aggravated ethnocide; education with less funds and fewer access opportunities; unfulfilled peace agreements; increasing unemployment; among others. But the protests are founded on more firm grounds. The country’s militarization and para-military model, at the service of large transnational capitalists that manage the dispossession and at the same time support one of Latin America’s most inequitable economies, according to the World Bank; prevailing corruption; biased justice are some of the reasons why the cities have finally risen up.

The illusion of an alleged peace without justice dialog is starting to dissipate. A war that was never halted is very much evident again. Repression goes on and it’s the strongest response to social protests.

The dialog convened by President Ivan Duque is not meeting the population’s needs because the Colombian State continues at the service of de facto powers and he won’t give up his effort to “pacify” or rather subjugate the Colombian people. He is not willing to relinquish a single privilege and he will not listen to any claim that prevents the looting of the country’s resources.

Once again, the best solution for this new pro-Uribe President is to not govern. He is answering with extreme repression, he is looking for someone to blame –to his right but especially to his left– and he is now convening other countries to impose the Inter-American Treaty of Reciprocal Assistance (TIAR) on Venezuela.

Following the offensive words said by Colombia’s Ambassador to the U.S. Francisco Santos about Donald Trump and the Department of State –information probably leaked by themselves–, every apparently unnecessary movement seems to be a desperate action. The Uribe-Duque movement is in its own trap: its unpopularity has reached unprecedented levels, the social conflict is aggravating, and its foreign policy is floundering. With Trump offended and amidst his own political conflicts, the Chilean Right about to demand that President Sebastian Piñera resign, the Continent is tottering. The Colombian Government is cornered and anything can be expected from a cornered beast, especially not very intelligent reactions such as worsening Venezuela’s local conflict or attacking it.

Tasks are distributed. Interior Minister Nancy Gutierrez made fun of people’s protest and is inciting violence by positioning the phrase “#NoPudieron” or “They CouldNot.” The new Foreign Affairs Minister Claudia Blum chaired a meeting with TIAR member states in Bogota with the Bolivarian Revolution as its main issue at stake.

There is no sign of peace from Colombia’s presidential Palace, not even for their own people, neither for neighbor countries. A new strike and mobilizations are being organized and if protests go on, the country’s harsh reality is going to become visible and perhaps people can reach some progress and push the Government to a real dialog. On the contrary, if the streets are silenced, those who are resisting will go back to their territories to continue their heroic but almost invisible struggle, while the State will continue imposing its war agenda to the country and the region. 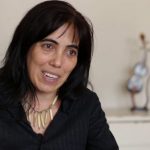