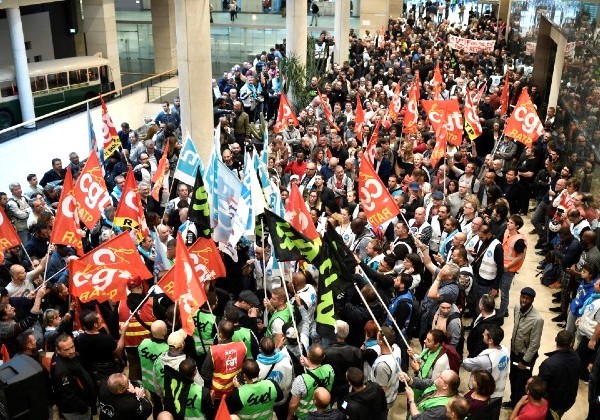 Converge With Planned Labour Strikes
This past weekend the Yellow Vests (Gilets Jaunes) celebrated their first birthday, with convivial barbeques on traffic circles (roundabouts) all over France followed by direct actions like liberating tollbooths. Although number of protestors has declined to about 10 per cent of the estimated 400,000 who rose up a year ago on November 17, 2018 – thanks to a year of violent police repression, media distortion, and sheer fatigue – a surprisingly large number of women and men throughout la France profonde (“middle France”) came out of ‘retirement’ and donned their yellow vests for “ACT 53” of the weekly Yellow Vest drama – double the previous weeks’ numbers. Recent polls indicate that 10 per cent of French people consider themselves “Yellow Vests,” and two-thirds still support them (although a majority wish they would go home!)

The first anniversary of the Yellow Vest uprising marks an historic moment: perhaps the first time in history that a self-organized, unstructured, leaderless, social movement has survived for so long. This weekend there was much eager discussion out on the traffic circles of the upcoming unlimited general strike called by the Confédération Générale du Travail (CGT) and other unions for December 5. Two weeks ago the Yellow Vests’ nationwide “Assembly of Assemblies” called for “convergence” with the upcoming strike, and the leader of the CGT, who had previously snubbed the Yellow Vests, reacted by inviting them to join.

So, after a year of lonely, increasingly dangerous, physical resistance to the neoliberal counter-reforms of the arrogant, unpopular “President of the rich,” suddenly new perspectives are opening for the Yellow Vests in their unequal struggle with the powerful, unified, increasingly authoritarian, capitalist state. (We will turn to this enticing possibility in a moment.)

This Revolution will not be Televised
None of the above events transpired through the French mainstream media, which as usual concentrated on two subjects: violence and Paris. In the capital this Saturday, as happens every Saturday, brigades of robo-cops outnumbered demonstrators and prevented them from actually marching along routes that had been (for once!) previously agreed upon, while a few bands of black-clad casseurs (vandals who somehow never seem to get arrested or even shot at) managed to smash bank windows and set a couple of cars on fire. The usual. Despite the fact, universally recognized by sociologists, historians, and analysts, that the Yellow Vests are unique among revolutionary movements because based in the provinces rather than centered in Paris, you would never guess this from French television.

Indeed, the highpoint of Channel 3’s evening coverage of the nationwide Yellow Vest anniversary, was a woman reporter filmed standing in front of the Arc of Triumph, with a perfectly empty Champs Elysées in the background, going on at length about the great achievement of the “forces of order” (as they are invariable termed) in keeping this rich Parisian neighborhood safe by emptying it. The next day’s top story quoted a thuggish gangster named Costner, Macron’s Minister of Interior (police), calling the Paris vandals “thugs and gangsters.” Nothing new.

On Sunday, Channel 5 aired a serious, well-produced, hour-long retrospective on the Yellow Vests. The words “convergence” and “Assembly of Assemblies” (of which there have been four) were never spoken. Clips of Yellow Vests acting violent were shown, but no images of another taboo subject: the government’s systematic excessive violence against demonstrators, sharply condemned by the Human Rights Commissions of both the UN and the European Union. No wonder “Turn off your TV and come out to talk with us” was among the Yellow Vests’ first slogans.

New Perspectives
Two weekends ago, the self-organized Yellow Vest movement held its fourth nation-wide Assembly of Assemblies here in Montpellier. This Assembly brought together 500 Yellow Vests delegated by over 200 local groups from all over France. [1] Pulled together at the last minute in an abandoned, futuristic Agriculture museum known as “the Saucer” as a squat, it was a convivial event, with food supplied by local soup-kitchens, endless small-group discussions and endless good will, despite a certain amount of controversy around the issue of “convergence” with the unions, of which many Yellow Vests are suspicious, as they are of political parties.

Montpellier was chosen at the Third Assembly of Assemblies to host the Fourth, and the local organizers, a somewhat secretive group, designed the format so as to exclude plenary sessions and official appeals, for example for Convergence with the unions, which many of us in Montpellier, as elsewhere, had been working toward for months. It soon became clear, as the results of the small-group discussions were synthesized, that the huge majority of delegates, although openly critical of the unions’ bureaucratic leaders, were eager to support and ally themselves with the organized workers and to converge with the nationwide, unlimited labour strikes that are scheduled to begin on December 5. At the last minute, the efforts of the organizers to limit debate were overwhelmed, and a near-unanimous Assembly voted the following appeal:

After a year of tireless mobilization, the situation has reached a turning point. The time has come for convergence with the world of work and its web of thousands of union members who, like us, don’t accept it. All the constituant sections of the people of France must join together: peasants, retired people, the youth, artists, people with disabilities, artisans, artists, the unemployed, temps, workers in both the public and private sectors…

Beginning on December 5, hundreds of thousands of workers will be on strike and meeting in general assemblies to ratify its continuation until the satisfaction of our demands. The ADA of Montpellier calls on the Yellow Vests to be at the heart of the movement, with their own demands and aspirations, at their jobs or on their traffic circles with their Yellow Vests clearly visible!

The defeat of the government’s reform of retirements would open the way to other victories for our camp. Everyone into the street beginning December 5, on strike, on traffic circles or in blocking actions.

Interviewed on BFM/TV, Philippe Martinez, the leader of the CGT labour federation, immediately declared that the Yellow Vest appeal to join the December 5 strike movement “A very good thing.” He added, “We have been trying for a year to find convergences, and little by little we’re getting there. We have the same preoccupations, the cost of living, the environment, unemployment.”

The Yellow Vest Assembly of Assemblies also voted unanimous appeals for international solidarity with all the spontaneous, horizontal social movements and uprisings around the globe, including Algeria Chile, Irak, Catalonia, Lebanon, Hong Kong, Equator, Sudan, Colombia, Haïti, and Guinée-Conakry, as well as the Syrian Kurds, while recognizing France’s heavy responsibility as an imperialist power and arms producer. The Yellow Vests were clearly proud and encouraged that peoples across the world were following, as it were, in their footsteps.

Cracks in the System
Since the Yellow Vests first rose up a year ago – in the wake of the abject failure of organized labour to mount a credible resistance to Macron’s steamrolling into law a series of neoliberal attacks on public services, wages, and social services – the social crisis in France has only deepened. The signs of cracks in the system are everywhere, as working people organize themselves to resist. Already there are struggles in hospital emergency rooms where patients wait hours on stretchers in corridors and where dedicated doctors and nurses are protesting lack of beds and lack of personnel; in schools, where classes are overcrowded, teacher aids cut back, and incomprehensible new programs are imposed from above, forcing students to choose their futures at age 15; on the railroads, where for the first time in a generation, railway workers spontaneously walked off the job after a safety emergency without asking permission from either management or the union; and most recently among firefighters, whose demonstration was gassed by the police in Paris and who have now formed an interprofessional alliance with the striking emergency room personnel.

The straw which broke the camel’s back was Macron’s recent unveiling of his proposed “reform” of France’s retirement system which, like much that is positive in France, dates back to 1945 when the French owning class was in disgrace for collaborating with the Nazis and the Communist- and Socialist-led Resistance was still powerful.

Macron’s pension “reform” would do away with early retirement for workers in dangerous or arduous jobs (for example railways) and replace today’s system, where retirement income is about 75 per cent of your last year, to one based on “points.” Points are calculated on the total number of weeks you worked in your life. This penalizes, for example, workers who have been unemployed and women who have taken time off for children. Each point would be worth a sum in Euros to be decided by the government in power when you retire! Based on current estimates, people would commonly lose around 30 per cent of expected benefits under the proposed system.

In their arrogance, Macron and the financial groups he represents are finally crossing a line which even Trump and the Republicans are afraid to cross: cutting retirement – the last straw in their systematic shredding of France’s (admirable) historical social contract. They can expect trouble.

Popular anger and resentment have been building up in France since early 2018, when Macron started pushing through his reactionary decrees and the 50th Anniversary of the 1968 student-worker uprising and general strike was on everyone’s mind. When the unions failed to rise to the occasion, ordinary people were so angry and disgusted that the pot boiled over and in November, the Yellow Vest movement burst on the scene out of nowhere.

Far from having “achieved nothing” by refusing to negotiate, the Yellow Vests got more out of Macron than all the unions: 1.7 billion Euros in concessions last December including year-end bonuses, tax breaks for the poor and rescinding of the gas tax that set the movement in motion. When these concessions failed to stop the movement, Macron unleashed a PR “great debate” where he did most of the talking and doubled down on police repression, but the Yellow Vests, whose theme song is “We are here!” are still here.

Today, French workers in almost every sector are already in motion in advance of the planned general strike, and the issue of retirements – along with health, education, public services – unites the whole population against the government and the narrow financial interests it represents. The declared goals of the Yellow Vests – Macron’s resignation, fiscal justice, economic equality, and participatory democracy – are frankly utopian, and when the general strike gets going, they are unlikely to be willing to stop half way when Martinez and the union bureaucrats decide to settle and end the strike as they did in 1936, 1945, 1968 and 1995. New perspectives? •

Personal disclosure: I was present as a delegate from Montpellier’s Convergence34 group.

[Richard Greeman has been active since 1957 in civil rights, anti-war, anti-nuke, environmental and labour struggles in the U.S., Latin America, France (where he has been a longtime resident) and Russia (where he helped found the Praxis Research and Education Center in 1997). He maintains a blog at richardgreeman.org.]