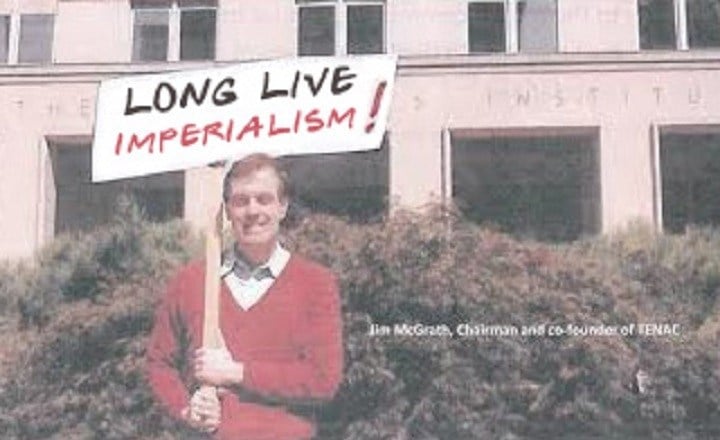 The DC Tenants Advocacy Coalition (TENAC) attacked Americans defending Venezuela’s embassy from a right-wing takeover and clamored for US military strikes on Syria. A local liberal activist named Jim McGrath is behind the regime-change cheerleading.

The Embassy Protection Collective swallowed a lot of tough pills over its month-long stint to keep the Venezuelan embassy in Washington, DC out of the hands of wealthy opposition expats. But somehow this one stung more than usual.

Embassy protectors had spent at least two weeks surrounded on all sides by dozens of pro-Juan Guaidó fanatics blaring airhorns, shining high powered lasers in their eyes, and physically assaulting anyone who attempted to deliver food or water to them. And then, the Trump administration had ordered PEPCO to remove power to the building. Without electricity, they had no working water pump, and no means to reach the outside world.

It was at this point that the collective decided — as so many DC residents resisting state or private attempts to remove them from their residence have done — to call TENAC, the DC Tenants Advocacy Coalition.

This hotline, which is advertised as “probably the greatest service rendered to tenants in this city,” is known for coaching renters through illegal evictions, rent increases, and unfair denials of service. So, running out of food, water, and options, the collective called. They explained their situation, were told to call back later, and waited. And waited.

After three hours, and what multiple collective members speculate to have been phone call between TENAC and the US State Department, they finally received an answer: “No way!”

If refusing to help the collective prevent the Venezuelan Embassy from falling into the hands of the opposition and their US government sponsors wasn’t enough, TENAC Chairman Jim McGrath decided to up the ante and issue a rabid regime change tirade under his group’s official letterhead:

“TENAC does take serious issue, however, with those occupying the Embassy, who appear to support Nicolas Maduro, a murderous tyrant, in office in Venezuela only by massive election fraud, and responsible for massive famine, starvation, and slaughter of countless Venezuelans, as well as the forced migration of millions of Venezuelans into neighboring Brazil and Columbia. As such, Maduro is a thousand times worse than the worst landlord in the District.”

The news that Maduro is “a thousand times worse than the worst landlord in the District” might have come as a shock to the 12.5 million Venezuelans receiving housing for free or at low cost (this is over a third of the country’s population), and who no longer have landlords thanks to the government Maduro leads. It would probably come as a surprise as well to the many DC residents deprived of fair housing at reasonable prices by an exploitative rentier class.

The foaming-at-the-mouth regime change propaganda of TENAC’s McGrath was once the speciality of John Bolton-type ideologues at the neoconservative fringe.

But in the era of Russiagate, this has become normalized, as liberals uphold the FBI and CIA as bastions of resistance to the Republican cretin in the White House. Like Rachel Maddow, who recently expressed sympathy for Bolton in a classic Russia-bashing rant, their main objections to Trump aren’t his horrifically racist, sexist, homophobic, and classist policies but rather his perceived subversion of US interests.

RELATED CONTENT: The Bolivarian Revolution and the Warmongering “Pacifists”

In a recent Youtube video uploaded by Mcgrath, “Old Man River,” a chronicling the infinite endurance of black people striving for equality in the Jim Crow era, and performed most famously by Paul Robeson, whose career and life were destroyed by McCarthism, becomes “Old Man Mueller,” a song lionizing the former FBI Director. “He don’t do lying, he don’t do cheating, he don’t do spying,” McGrath croons about the man who normalized warrantless wiretapping, the Patriot Act, and the frequent entrapment of Muslims in racist dragnets.

For the better part of a decade, TENAC has been stepping far beyond the boundaries to which tenants’ rights advocates usually limit themselves, directly parroting imperialist rhetoric from the heart of the permanent war machine.

As Thinkprogress noted in its 2013 report “Meet the DC Tenants’ Rights Group that Wants a No-Fly Zone in Syria,” McGrath managed to raise eyebrows by using his platform to lobby the Obama administration for a military operation that even Hillary Clinton conceded would “kill a lot of Syrians.”

In his desperation for regime change, the “grassroots” war activist was apparently unbothered by such minor considerations as the brazen illegality of preemptive war or the Chairman of the Joint Chiefs of Staff publicly calling such an engagement into question.

On its website, TENAC lists the aid group, Catholic Relief Services (CRS), as a special partner “for peace in Syria and throughout the Middle East.” Yet CRS is USAID’s eighth largest partner in Syria, and most recently made waves for surreptitiously supplying Al Qaeda militants and lying about it.

The Office of the Inspector General subsequently froze $30 million of CRS assets amid an investigation which “found that employees of a U.S.-based NGO knowingly diverted USAID-funded food kits to the militant organization Hay’at Tahrir al-Sham (HTS), which has been designated by the DoS as a Foreign Terrorist Organization. The NGO’s employees allowed HTS fighters to be included among program beneficiaries in Idlib province and submitted falsified beneficiary lists to USAID to conceal the fighters’ participation in the food assistance program.”

Apparently, direct participation in a fraudulent scheme to smuggle supplies to an Al Qaeda affiliate has done little to dampen TENAC’s enthusiastic approval of the group. To this day, TENAC’s international outreach page boasts that “significant TENAC donations have been given” to CRS, claiming they are among the TENAC partners who “devoutly seek peace in the Middle East.”

Phone calls between Venezuelan embassy protectors and TENAC staff have revealed that McGrath doesn’t speak for everyone at TENAC when he condemns peace activists and thunders for the removal of the elected Venezuelan government by a coup. “Our board is highly divided on this issue,” declared a staffer, who went on to reveal that they personally sided with the Embassy Protection Collective rather than the police and rightist opposition that prevented them from receiving food and water.

One can only hope McGrath doesn’t treat his colleagues and subordinates as he treats others who inflame his regime change passions. 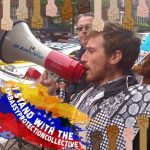 Wyatt Reed is a Blacksburg, Virginia-based writer and activist who spent several years in Latin America.

Wyatt Reed is a Blacksburg, Virginia-based writer and activist who spent several years in Latin America.