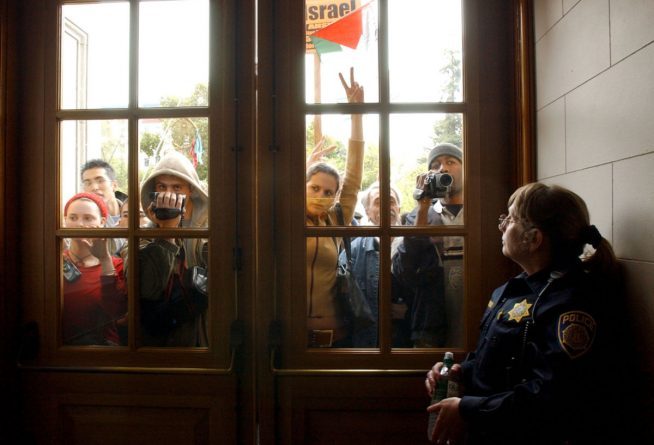 On March 22, tenured English professor Anthony Alessandrini was startled to see a photo of himself in the New York Daily News. The picture accompanied an article by reporter Larry McShane. The headline was damning: “Kingsborough professor, during campus event, urged donations to group with alleged ties to Palestinian terror group.”

Alessandrini (who is this reporter’s colleague at Kingsborough Community College) had not been contacted by either McShane or other Daily News staffers before the article was published and says that it is riddled with inaccuracies. What’s more, he sees the article as part of a pervasive campaign to silence critics of Israel — including many progressive Jews — that is being orchestrated by a network of conservative organizations that are firmly embedded in both the Evangelical Christian and Jewish Zionist right wings.

One of the most prominent groups is the Lawfare Project, a well-funded legal group whose website claims to have “350 attorneys dedicated to upholding the civil and human rights of the Jewish community.” The site further boasts that the Project provides legal counsel to “members of pro-Israel communities who have been targeted and harmed based on their ethnicity, religion, citizenship and nationality.”

Unlike more established groups, such as the 122-year-old Zionist Organization of America, the midtown-Manhattan-based Lawfare Project is relatively new.

Mondoweiss, a website devoted to “news and opinion about Palestine, Israel and the United States,” and created by progressive Jews, reports that the Project launched in 2010 with start-up money from the Conference of Presidents of Major American Jewish Organizations, the Jewish Communal Fund and the MZ Foundation.

Since then, money has continued to flow into the Lawfare Project’s coffers. Charity Navigator reports that in December 2017 (the most recent year for which filings are available), the group had assets of $1,082,069; that year’s income was a similarly hefty $1,392,062. This has enabled the Project to go after dozens of people and organizations, from the Olympia Food Co-op in Olympia, Washington; to the National Lawyers Guild; to professors like Alessandrini and students across the U.S. who support the Boycott, Divestment and Sanctions (BDS) movement on campuses. Beyond Kingsborough, schools as diverse as Connecticut College, Boston University, Rutgers, San Francisco State University, Temple University and the University of Illinois at Urbana-Champaign have been caught in the Project’s crosshairs.

Lawfare’s Conservative Connections
The Lawfare Project’s founder, Brooke Goldstein, is close to other conservative movers and shakers, and the Project’s work and speaking engagements often overlap with Zionist entities, such as Canary Mission, StandWithUs and the Zionist Organization of America. But Lawfare’s tentacles also reach into the broader right wing and include alliances with Brigitte Gabriel’s Act! For America; Robert Spencer and Pamela Geller’s American Freedom Defense Initiative (also known as Stop Islamization of America); David Horowitz’s Freedom Center; Daniel Pipes’s Middle East Forum (where Goldstein once worked as a director of the group’s legal project); Pat Robertson’s American Center for Law and Justice; and David Yerushalmi’s Society of Americans for National Existence. Goldstein has also been a frequent guest on Fox News. (Neither Goldstein nor Lawfare Project staff attorney Lori Tucker responded to Truthout’s repeated requests for an interview.)

At first blush, this may seem like a confluence of strange bedfellows, linking the Christian right-wing and Islamophobic organizations to the pro-Israel lobby.

However, Chip Berlet, a research analyst who specializes in the study of right-wing movements in the U.S., explains that both Christian and Jewish Zionists are fervent supporter of Israel, albeit for different reasons.

“Christian Zionists and right-wing Christians believe that Jesus will return to the Temple Mount in Jerusalem,” Berlet says. “This site is also crucial to Muslims and Jews. Even though Jews don’t believe that Jesus is the messiah, right-wing Jewish Zionists have no problem working with the Christian right because [they see it as] a way to strengthen Israel before the arrival of the ‘real’ savior. The Christian right believes that at the end time, all but a handful of Jews will perish, but they see forming a strategic partnership [with Jews] now as the best way to ensure Jesus’s return.”

Fighting Israel’s perceived enemies, Berlet continues, and perusing college campuses for faculty and students who support BDS is the raison d’etre of many conservatives. “People who hate the left and think the left is responsible for attacks on Jews on campus have joined forces to stifle free speech,” Berlet says. “They use legal threats. This often works because college administrators flip out when someone says they’re going to sue the college or some of its faculty or students for anti-Semitic statements or behavior. Most administrators don’t want trouble. Threatening a lawsuit is a political strategy to enforce a narrow point of view in regards to Israel and anti-Semitism.”

Evan Mascagni, policy director of the Public Participation Project, explains that these lawsuits are called SLAPPs — Strategic Lawsuits Against Public Participation — and says that they are typically filed with the intention of harassing critics. In addition to people critical of Israel, SLAPPs have been directed at environmentalists, including fracking and gas pipeline opponents; women who accuse men of rape or sexual abuse; Black Lives Matter activists; and reproductive justice organizers, among others. About half of states, Mascagni reports, have no laws whatsoever to protect people from being slapped with a SLAPP. But even in those states with on-the-books SLAPP protections, the regulations vary. In New York, for example, the law does not mandate that the plaintiff pay attorney’s fees if a case is found to be without merit; judges have the discretion to determine whether fees should be imposed. This is why, he continues, federal anti-SLAPP protections are needed.

Slapping Back
To combat the use of SLAPPs to stifle activism, progressive groups came together in 2018 to form the Protect the Protest Task Force. Jana Morgan, a Task Force member, says that more than 20 organizations — including Greenpeace, the ACLU, 350.org, the International Corporate Accountability Roundtable, the Center for Constitutional Rights and Public Citizen — have joined forces to stop what she says is an “insidious attempt to silence people who speak truth to power.” To date, the Task Force has rallied in front of the New York office of SLAPP-happy law firm Kasowitz Benson Torres and has sent a roving billboard through Dallas, Texas, to alert residents that Energy Transfer Partners — the company behind the Dakota Access Pipeline — has sued the pipeline’s critics for defamation.

Civil rights attorney Alan Levine saw the attempt to silence Israel’s critics in action when he represented five Brooklyn College undergraduates in 2015. They had been charged by the Lawfare Project with discriminating against Jewish students at an event at which philosopher Judith Butler (who is Jewish) and BDS originator Omar Barghouti spoke.

“The Lawfare Project is not aiming to advance the law,” Levine told Truthout. “They are not looking to make case law or establish doctrine. They’re in league to amplify the charges of anti-Semitism against anyone who criticizes Israel.” Levine calls it a misuse of the law and says that the Lawfare Project accomplishes its goals by getting lots of publicity. “In that respect, it is successful,” he says. “Charges of anti-Semitism are effective, and conflating anti-Semitism with anti-Zionism has been key. The group seems to have sufficient resources so that losing in court — as they did in the Brooklyn College case — does not discourage them.”

In fact, the Lawfare Project has repeatedly lost high-profile cases. In March 2018, a suit against board members of the Olympia Food Co-op in Washington State was dismissed. The case harkened back to 2010, when the co-op decided to remove nine items imported from Israel from its shelves.

Similarly, Rabab Ibrahim Abdulhadi, a native of Nablus, Palestine, and an associate professor of Ethnic Studies/Race and Resistance Studies at San Francisco State University (SFSU), has been repeatedly vindicated against charges of anti-Semitism and fiscal impropriety. A Lawfare Project video titled “Stop Anti-Semitism on Campus SFSU” portrays San Francisco State University as a “notoriously hateful school” where Jews feel unsafe to wear yarmulkes or other symbols of their faith — charges that students affiliated with Students for Justice in Palestine and Jewish Voice for Peace adamantly refute.

Abdulhadi’s wins, however, have not deterred her opponents. Bright red posters of her were put up throughout the campus by the David Horowitz Freedom Center. They called her a “collaborator with terrorists,” and included the hashtag #Jewhatred. In addition, Abdulhadi charges that SFSU administrators have reneged on their commitment, made in 2006, to add two full-time faculty lines to the Arab and Muslim Ethnicities and Diaspora Studies program that she has been running as a senior scholar and founding director since 2007. “As a result of its corporatization and complicity with Israel’s apologists, SFSU has been waging a war of attrition to push me out and shut down the programs I direct,” Abdulhadi told Truthout.

Her attorney, Behnam Gharagozli, calls the situation a bureaucratic nightmare. “It’s like having to go to the Department of Motor Vehicles for permission every time you want to staple two papers together. Even worse, Abdulhadi’s treatment parallels what is happening to Palestine under Israeli occupation. Both are efforts to break people’s wills and get them to leave.”

But Abdulhadi is not going anywhere. In fact, she has filed a motion asking the court to sanction Brooke Goldstein and other attorneys associated with the Lawfare Project.

Anthony Alessandrini, meanwhile, is continuing to defend himself against allegations that he supports terrorism. He describes the genesis of the allegation against him. Back in May 2018, he begins, Kingsborough Community College sponsored a diversity symposium on campus. The theme was “nonviolent activism in troubled times” and there was a panel on youth activism in Palestine that he moderated. “Even before anyone on the dais spoke, I made a point of saying, ‘We are here discussing issues that, for many people, are controversial.’” he recalls. “I told the audience that if they felt a particular point of view was not being represented, to please represent it and speak out.”

Alessandrini says that he also offered the audience some concrete data about life in Gaza that he’d gleaned from Jewish Voice for Peace. Then, he continues, since he wanted to make sure that people understood that Gazans have consistently worked to promote peace and social justice in the territory, he mentioned a fundraising drive by Medical Aid for Palestinians (MAP) that was getting a lot of traction at the time. “I was not raising money for them,” he says. “I simply mentioned that MAP existed and was doing some fundraising for medical aid.”

He also stresses that MAP is not a terrorist organization. In fact, he says, despite a complaint from the Lawfare Project and UK Lawyers for Israel against MAP, charging that the group was a front for terrorism, in February 2019, the British Charity Commission found that the allegations did not warrant further investigation. This, Alessandrini notes, was not included in the Daily News article.

“This is not simply about me or about any other single individual,” he concludes. “The hopeful thing that I hold onto is that those of us working for justice on college campuses must be doing something right if we’re being attacked so viciously.” 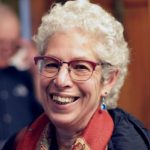 Eleanor J. Bader teaches English at Kingsborough Community College in Brooklyn, New York. She is a 2015 winner of a Project Censored award for “outstanding investigative journalism” and a 2006 Independent Press Association award. The co-author of Targets of Hatred: Anti-Abortion Terrorism, she presently contributes to Lilith, Rewire.News, Theasy and other progressive feminist blogs and print publications. (Photo by Rudy Riesgo.)

Eleanor J. Bader teaches English at Kingsborough Community College in Brooklyn, New York. She is a 2015 winner of a Project Censored award for “outstanding investigative journalism” and a 2006 Independent Press Association award. The co-author of Targets of Hatred: Anti-Abortion Terrorism, she presently contributes to Lilith, Rewire.News, Theasy and other progressive feminist blogs and print publications. (Photo by Rudy Riesgo.)