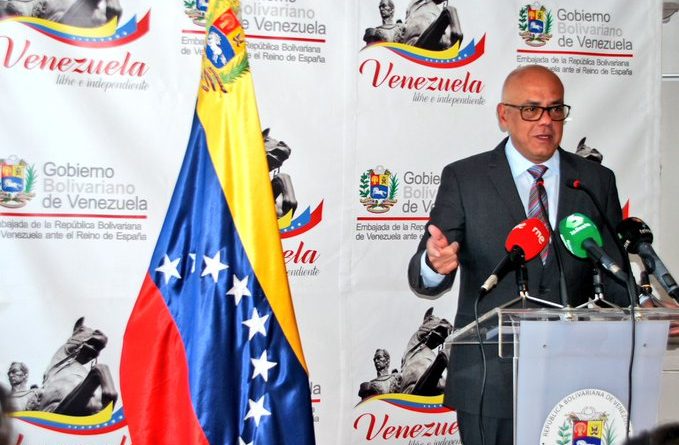 The Vice President of Communication, Culture and Tourism, Jorge Rodríguez, urged governments of European countries not to support Juan Guaidó as the supposed “president in charge” of Venezuela and to renounce attempts to overthrow the legitimate President, Nicolás Maduro. At a press conference at the Venezuelan embassy in Madrid, Rodríguez said that the country is living “the last throes of the dark adventure” that, in his opinion, the opposition deputy Juan Guaidó stars in, since he proclaimed himself president of Venezuela.

Meanwhile, during the ceremony to commemorate the International Day of Persons with Disabilities, President Nicolás Maduro had harsh words towards Deputy Juan Guaidó saying “Now what awaits him is jail. For him to pay for the crimes he has committed. Justice, the people of Venezuela ask for justice”.

The head of state added that it was not necessary to apply a strong approach against the parliamentarian, who has tried to usurp presidential duties after proclaiming himself “president in charge”. “I did not need to use a strong approach,” he said, while expressing: “They lock themselves up … He is politically over.”

Rodríguez is in Madrid representing the country on the occasion of the 25th conference of the United Nations Framework Convention on Climate Emergency (COP25).

Rodriguez recalled that Guaidó, for whom only 91,000 people voted for -out of the 20 million who are registered in the Venezuelan electoral registry- “is related to the paramilitary band (Colombian) Los Rastrojos, which has caused the death of 1,500 Venezuelan citizens due to their link with mercenaries paid by the US administration, a truth that many media have tried to hide.”

“The Venezuelan opposition has violated International Law, that of the peoples, to sovereignty and self-determination and each of the letters of our national Constitution,” Rodríguez denounced. “The one that Guaido wanted to establish as president in charge of Venezuela, assuming legislative and executive power, is a sign of a true dictator,” he said.

On the other hand, Rodriguez highlighted allegations of Venezuelan anti-Chavista deputies about the apparent embezzlement of resources of alleged humanitarian aid.

This Monday, the First Justice deputy for the Anzoátegui state, José Brito, said at a press conference that 70 deputies of that legislative body have signed a letter and handed it over to Guaidó, demanding he investigate irregularities with the money donated by the US government as alleged “humanitarian aid” for Venezuela. “Guaidó is the one who killed this hope, it became a scam for the people,” he said.

Brito was suspended from Primero Justicia party last weekend after being accused by a anti-Chavista website, Armando.info, of taking “informal steps” before the Prosecutor’s Office of Colombia and the United States Department of State, with the purpose of allegedly quelling investigations and sanctions against businessmen such as Carlos Lizcano or Alex Saab, whom the opposition accuses of corruption for being linked to the importation of products for the CLAP (Local Food and Production Committees, bags of food that the Venezuelan government distributes to six million families to protect them from US sanctions).

Rodriguez, in his press conference, reiterated Brito’s allegations about 70 parliamentarians who have demanded Juan Guaidó explain the fate of the 400 million dollars sent by the United States government for alleged “humanitarian aid.”

In relation to this point, last Friday the anti-Chavista Humberto Calderón Berti denounced the embezzlement of humanitarian aid funds in Cúcuta, by the team designated by the self-proclaimed to administer it. Calderón Berti, who in January was appointed by Guaidó as the supposed Venezuelan ambassador to Colombia, but was dismissed at the end of November by Guaidó himself, revealed that these funds were embezzled by the self-proclaimed’s inner circle. He also claimed that the appropriation of the assets of Citgo and Monómeros were squandered in luxuries, “prostitutes and liquor.”

“Authorities warned of the mismanagement of resources on prostitutes and liquor and fictitious billing, with the argument of humanitarian aid … The Venezuelan extreme right has never been at such a low level of public appreciation,” he said at the press conference.

Rodríguez said that the United States sent the money under the euphemism of the entry of humanitarian aid, but the real intention was to promote military aggression against Venezuela, pay mercenaries and terrorists to cause a coup against the president of the Bolivarian Republic of Venezuela, Nicolás Maduro.

“Everything went wrong. They stole Citgo, within their same ranks evidence of money embezzlement began to appear,” he added.